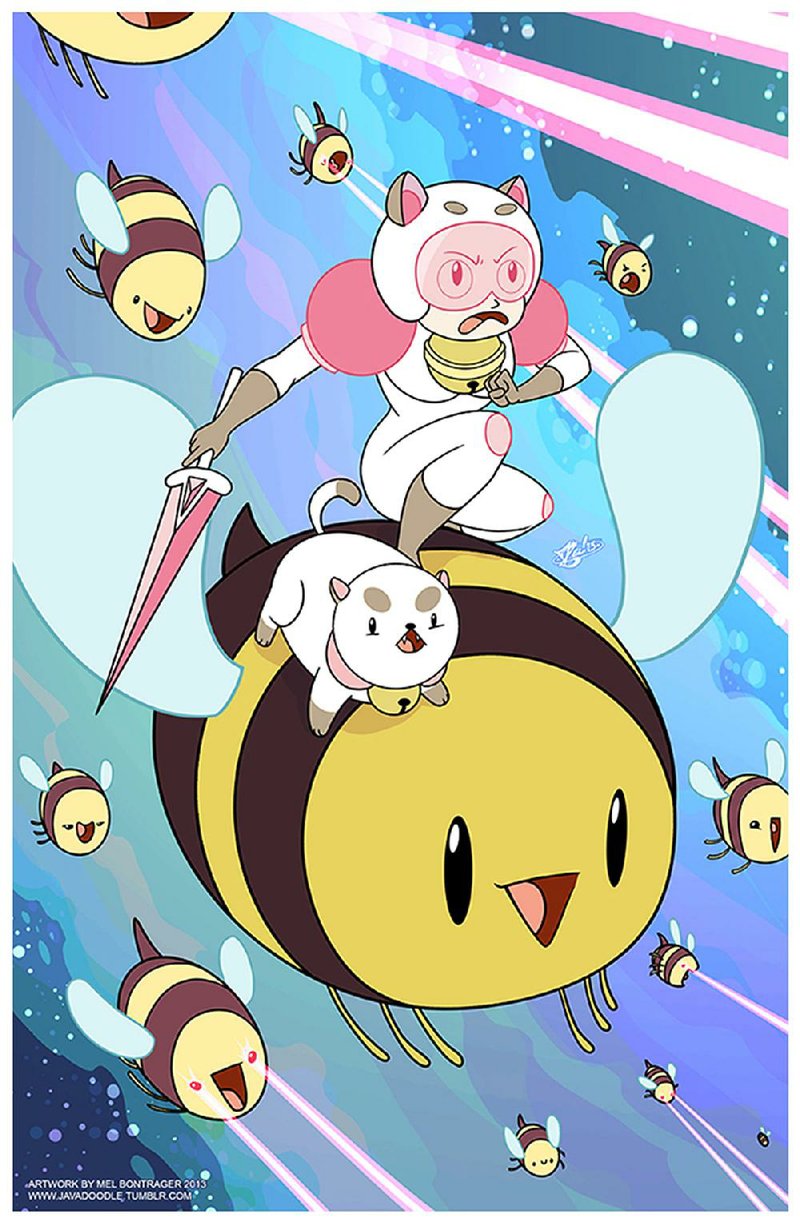 Bee & Puppycat is one of You-Tube’s Cartoon Hangover channel’s most popular animated programs.

LOS ANGELES - It’s a quirky animated show called Bee & PuppyCat, about a twentysomething professional who has intergalactic adventures with a mysterious creature she calls PuppyCat.

The man who produced the popular online series on You-Tube’s Cartoon Hangover is 62-year-old Fred Seibert, who is responsible for some of the most successful animated TV shows of the 1990s.

The former DJ and college dropout, who helped launch MTV and revive Nickelodeon and Cartoon Network, is now reinventing himself as an innovator of online animation.

YouTube has turned to Seibert and his company, Frederator Studios, which operates Cartoon Hangover, to create a crop of offbeat animated shorts for the millennial generation.

“The Internet is ushering in the next golden age of animation,” Seibert said. “The Internet provides an outlet for people who can’t get their material seen in traditional places and opens up new creative avenues and new creative audiences, just like cable did to broadcasting.”

Since its debut in 2012, Cartoon Hangover has become one of YouTube’s fastest-growing channels, drawing more than 13 million unique viewers to original programs, including Bee & Puppy-Cat and its flagship series Bravest Warriors, from Pendleton Ward, creator of the Cartoon Network hit Adventure Time.

Cartoon Hangover is set to release several additional cartoon shorts from the United States and Europe early next year, with titles like SpaceBear from Austin, Texas, and Chainsaw Richard from Sweden. The series are free to watch and roll out in weekly or bimonthly episodes that are five to six minutes long.

“The content fits perfectly with our ‘generation C’ mantra - bringing the best content to the most plugged-in, interconnected audience,” said Laura Lee, an entertainment programming executive at YouTube, which provided $5 million to finance the launch of Bee & PuppyCat and other animated shows on Cartoon Hangover.

She likens Seibert to a “quintessential salmon” who is “always going upstream away from the ocean, doing kind of disruptive things like launching MTV and Cartoon Network. He’s always seeking out some new frontier.”

Seibert lives in a Manhattan apartment with his wife and two teenage boys a few blocks from Frederator Studios’ main office in New York’s Flatiron District. The office is decorated with some of the hundreds of art posters and postcards that Seibert has collected and created over the years. To keep people up to date on his studio’s projects, he mails out 200 postcards each month promoting the latest cartoons.

Although he is based in New York, Seibert relies on a worldwide network of freelance animators who continually pitch new ideas for shows, which are produced in Burbank, Calif. Seibert says he often looks for material that is being ignored by the mainstream.

“For 15 years I’ve been trying to sell teenage-oriented girl animation,” he said. “I’ve been rejected pretty roundly by people telling me that teenage girls don’t watch animation, which I think is hogwash.”

Seibert cites the popularity of Natasha Allegri’s Bee & PuppyCat, which has drawn more than 5 million views since the first short ran in July. More than 18,000 show fans recently raised $872,133 in a Kickstarter campaign to fund production of a dozen more episodes, he said.

“I’ve been wearing the same thing to work every day for 26 years,” he said. “I started evolving an outfit to make it seem like I was business enough to some clients and creative enough to others, but nobody could quite figure out where I stood. On top of that, I’m really bad in the morning at deciding what to wear.”

Born in New York and raised on Long Island, Seibert never planned on a career in animation. His parents, immigrants from Bulgaria, were pharmacists.

In the late 1960s, Seibert enrolled at Columbia University to study chemistry but soon had his doubts, he said: “Six weeks into school I looked at my lab partner and said, ‘The Beatles are more important to me than this,’and that was the end of my chemistry career.”

Seibert was working as a promoter for a country radio station when future media mogul Bob Pittman hired him to help promote the launch of MTV in 1981.

Among other things, Seibert helped create the iconic “I Want My MTV” campaign.

After MTV, Seibert helped reverse Nickelodeon’s fortunes by re-branding the cable channel as a “club that only kids could join,” he said.

In 1992, he took over the Hanna-Barbera animation studio, creator of The Flintstones, which had been without a breakout hit in a decade.Seibert encouraged animators to write their own material rather than relying on writers to create the shows.

During his tenure from 1992 to 1996, Hanna-Barbera produced a string of animated hit TV shows for Cartoon Network, including The Powerpuff Girls and Dexter’s Laboratory.

When Hanna-Barbera was sold to Time Warner Inc., Seibert formed Frederator Studios. It would produce more than 200 short films and other successful TV shows, including The Fairly OddParents, one of Nickelodeon’s longest-running animated series.

Seibert’s foray into digital media began in 2006, when he started the first cartoon video podcast. He enlisted the help of his former intern, David Karp, founder of the social network Tumblr, to develop the platform. Karp was just 15 when he went to work as an intern for Seibert, who was among the first investors in Tumblr.

“I could not imagine what I would be today if it were not for this guy,” Karp said. “He’s been a real mentor in helping me navigate all the things in my life.”

Throughout his career, Seibert developed a reputation for identifying and cultivating up-and-coming talent, including Craig McCracken, creator of The Powerpuff Girls; Hanna-Barbera alumnus Seth MacFarlane, creator of the TV series Family Guy; and Genndy Tartakovsky, creator of Dexter’s Laboratory.

“Fred set up this system where you succeeded or you died by your own decision making,” Tartakovsky said. “You get to prove yourself and if it works, it works, and if it doesn’t, you can’t blame anyone else.”