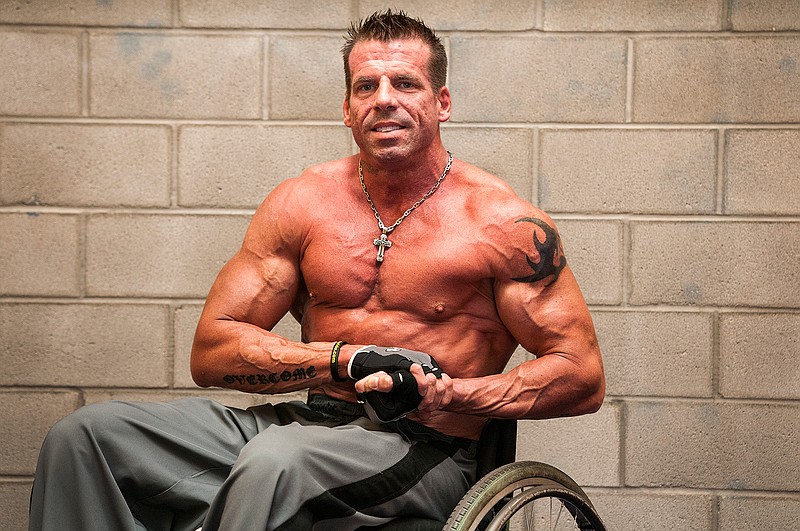 Competitive bodybuilder and inspirational speaker Chad McCrary poses for a portrait April 10 at Anytime Fitness in New Boston. McCrary recently took top honors, finishing in first place in the heavyweight and the men over 40 master's divisions of the Sunshine Classic in West Palm Beach, Fla. "I love to compete, but I believe I'm finally ready to do some more public speaking and tell people they can overcome anything thrown their way in life," McCrary said.

Louis Pasteur, founder of microbiology, overcame humble beginnings to save lives because he never quit, always worked hard and believed in himself.
Chad McCrary, a wheelchair-bound bodybuilder from DeKalb, Texas, has a similar message for everyone-never surrender to life's obstacles.

"Believe in yourself and don't listen to the naysayers," said McCrary, 42. "When I told people that I wanted to be a championship bodybuilder, they literally laughed at me." 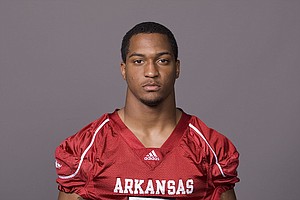 submitted photo of University of Arkansas tramain thomas
McCrary won the 2016 National Physique Committee national championship in West Palm Beach, Fla., on March 19 in the heavyweight and master's divisions. The master's division is for men over 40.

He began competition in 2005 and qualified for nationals in 2008. After taking second place in the men's heavyweight division, McCrary was disgruntled with the judges' results and did not compete again until 2015. He continued to lift weights.

In August of 2015 a friend, Nick Scott, told him that he should compete in the 2016 wheelchair nationals. Competition taught McCrary many lessons.

"If you don't win, you learn," McCrary said. "You take that learning experience and it makes you stronger. I had given up belief in myself after I placed second. I went back to the drawing board and didn't give up on myself. I achieved what I had set out to do."

McCrary is grateful for all that Scott has done a lot for him.

He decided to prepare for the 2016 nationals with strict training and diet. McCrary trained with Jon Minter, who is a great motivator.

The Arnold Classic will have a wheelchair division in 2017. McCrary has to earn his professional card in order to compete in this prestigious body building tournament, which is his goal. He will compete in a pro qualifier later this year.

Being a positive influence on others motivates him to keep working hard each day.

"I want to show people that if I can do it, so can they," McCrary said. "I feel like I am being utilized as an example by God. God uses people all of the time, and I feel like it's a calling."

McCrary is a Christian and is engaged to Relynn Fields. According to him, Fields has been a huge support and McCrary can't thank her enough.

"There are many situations such as loss of a loved one or loss of a job that can affect people adversely," he said. "Don't wallow in your own self pity."

He is working on getting a website up and running-chadmccraryinspires.com. Furst Place Nutrition is the 42-year-old's sponsor. The CEO, Michael Caulfurst, is a motivational speaker and bodybuilder.

"They pay tribute to the military, and I liked that," McCrary said. Caulfurst gave him an offer, and he accepted it.

The wheelchair-bound bodybuilder fractured his vertebrae in 2005 when he decided to compete in motocross. McCrary had a life-altering accident at a competition in Plain Dealing, La., in 2005.

"I was attempting a triple on a long, 110-foot piece of track," McCrary recalled. "I knew when I left the face of the jump that I was going to be short on the landing."

There wasn't much he could do. McCray hit the apex of the dirt mound, and the bike landed on its frame. Because of the angle of his landing, the injury went straight up his spine.

"I rolled and rolled, and I heard my back snap," McCrary said. "I lost sense of presentation below the waist. I tried to move but I couldn't."

The champion bodybuilder was air lifted to Louisiana State University for surgery. His T-12 vertebrae burst. The surgeon had to dig out over 140 pieces of the bone. McCrary had also torn his spinal cord.

He had no use of his legs.

"I was in horrible pain," McCrary recalled. "The doctors told me that I would never walk again and that stung. I have thick skin, but I couldn't wrap my mind around that."

The DeKalb weightlifter spent three months in rehab at CHRISTUS St. Michael Hospital. Slowly he showed signs of improvement and could eventually move his feet a little.

"I did my own adaptive training and took to it," he said. "It was good therapy, physically and mentally."

After 3 1-2 years, McCrary was able to stand up for two seconds. Months after he stood up, he used a walker.

Months after using a walker, McCrary learned to walk on two forearm crutches. He can walk for very short distances but still has to use a wheelchair.

"At one point I was going to commit suicide," McCrary said. "But something told me not to do it. ... I had a purpose."