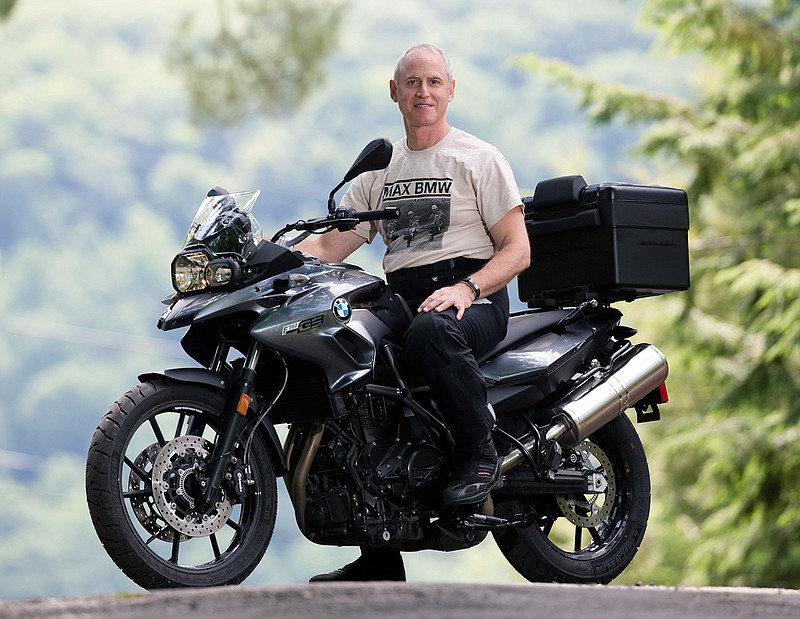 In this Thursday, June 23, 2016 photo, Dan Ruderman poses on a motorcycle at his home in Great Barrington, Mass. Ruderman plans to join a cross-country motorcycle trip to celebrate the 1916 trip made by his grandmother Adeline Van Buren and her sister Augusta Van Buren.

A century ago, when the automobile was in its infancy and most roads weren't paved, two intrepid sisters from Brooklyn made a remarkable journey-a 4,000-mile trek across the country on motorcycles.

Augusta and Adeline Van Buren devised the trip in 1916 in the run-up to World War I, seeking to prove women could be military motorcycle couriers, able to endure long distances and harsh conditions as well as men.

They did indeed complete their arduous two-month ride but were turned down by the Army because of their gender. It's nonetheless remembered as a milestone in the then-burgeoning women's movement.

"When you really think about it, that's four years before women had the right to vote," said Robert Van Buren, a great-nephew of the sisters. "They're trying to prove that women can contribute to the war effort that they knew was coming."

To mark the 100th anniversary of that ride, BMW and the Indian motorcycle company are sponsoring a three-week motorcycle adventure for women that kicks off Sunday in Brooklyn and will closely follow the original route to California.

It will be much easier than it was in 1916, when many roads were still dirt. The Lincoln Highway, which the sisters followed, was cobbled together in 1913 and went from New York City's Times Square to San Francisco, but it simply connected local roads.

"They were literally riding on the very same horse trails that farmers used, and out West were covered wagon trails, unimproved, unmarked, unsigned," said William M. Murphy, who retraced their route and wrote a book about it.

Daring to be great was part of the Van Buren sisters' upbringing. Their mom died when they were young, and their dad raised them to be independent, athletic and strong.

The Van Burens flew airplanes, knew how to box, rode horses and raced them, ice skated, and even took part in an annual motorcycle race from New York to Poughkeepsie on New Year's Eve.

At just over 5 feet tall and weighing under 120 pounds, the sisters (Augusta was 32 and Adeline 27 in 1916) were nevertheless tough. They had to be to attempt such a feat, aboard a pair of Indian Powerplus motorcycles, heavy, powerful machines capable of reaching 60 mph but with no front brake.

Dressed in leathers, the Van Burens encountered prejudice, getting arrested several times for wearing men's clothes. They confronted obstacles at seemingly every turn, including rainstorms, floods and snowstorms. They battled mud for two weeks, were rescued by miners after getting stuck at a remote mining camp in Colorado, and nearly ran out of water in the desert near Great Salt Lake.

No surprise that one day they managed to ride 300 miles one day and only 3 on another. But none of it seemed to matter.

"If you see some of the pictures of them, they're just so happy. They're having so much fun," said Dan Ruderman, a grandson of Adeline. "And the shock of some of the men. You see guys standing on the side of the road looking at them with their hands on their hips, scowling, 'What is this that I'm seeing?'"

The Van Burens, who spent their evenings in towns warning citizens that they had to be ready for war, also became the first women to ride to the 14,115-foot summit of Pikes Peak by motorcycle, doing so on a whim.

Their journey didn't end in San Francisco as planned. When the sisters were late arriving and nobody was there to greet them, they kept on going-south to Los Angeles, then San Diego, and straddling the border with Mexico at Tijuana. They then returned to Los Angeles, shipped their motorcycles back and took a train home.

Adeline was an educator who went on to get a law degree at a time when women didn't really practice law, while Augusta, a bookkeeper, would join the Ninety-Nines, an international organization of female pilots established in 1929 by 99 women, with Amelia Earhart as their first president.

Adeline died in 1949 at age 59, and Augusta died a decade later at 75. The family says there is no record that they continued to ride motorcycles after the trip.

"I'm sure my grandmother would be proud," Ruderman said.