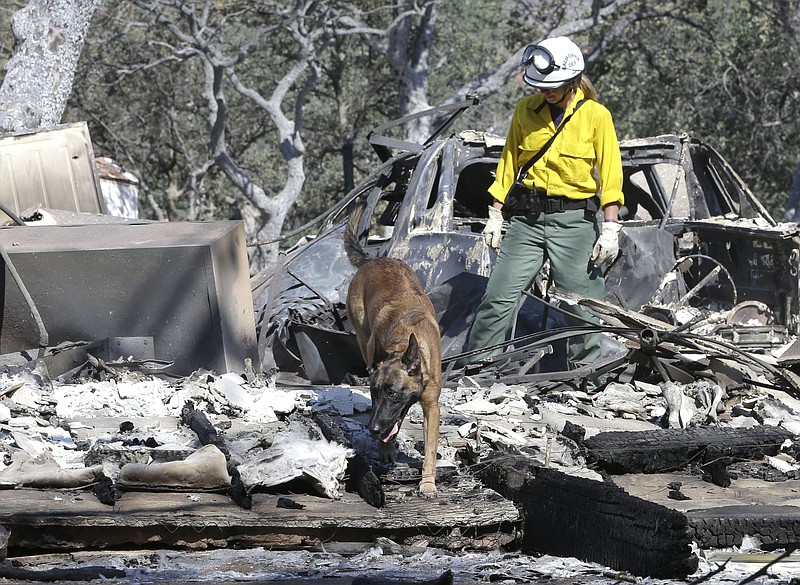 Inca, a cadaver dog, and her handler Mary Cablk search the burned ruins of a home Monday, June 27, 2016, in Squirrel Valley, Calif. The blaze had killed an elderly couple who were found Friday after apparently being overcome by smoke. The fire has burned more than 70 square miles and is 40 percent contained.

FRESNO, Calif.-A speeding wildfire in California that turned hundreds of homes near Lake Isabella to piles of twisted rubble has forced a conversation about how to minimize destruction in the most populous state experiencing the effects of climate change.

Wildfires in the last years have killed several people in California, a drought-prone state experiencing a five-year dry spell.

Weather is one factor, but more critical is the state's exploding population, spawning communities in the once sparsely inhabited ranch and timberland regions long known to burn, experts say.

"We know this is going to happen," said Kevin Ryan, a former U.S. Forest Service fire scientist, now a consultant with FireTree Wildland Fire Sciences. "We need to manage to take the crisis out of it."

Judy and Ken Brown were among hundreds who narrowly escaped the firestorm last week that swept down a mountainside and through their community beside Lake Isabella, an hour east of Bakersfield.

They've seen wildfires in the past, but none like this one that quickly consumed their mobile home and dozens in the neighborhood largely made up of retirees.

Judy Brown said she and her husband received an automated call telling them to leave. They soon heard exploding propane tanks and neighbors screaming.

With their two dogs loaded in their car, the couple drove to safety through thick smoke as their home burned behind them. Judy Brown said they were lucky to survive.

"It was like a tornado, but it was fire," she said. "I thought it was the end of the world."

The fire, driven by strong winds across mountains covered with dry grass and trees, travelled 11 miles in its first 13 hours, which firefighters say is fast. It killed and elderly couple and destroyed more than 200 homes.