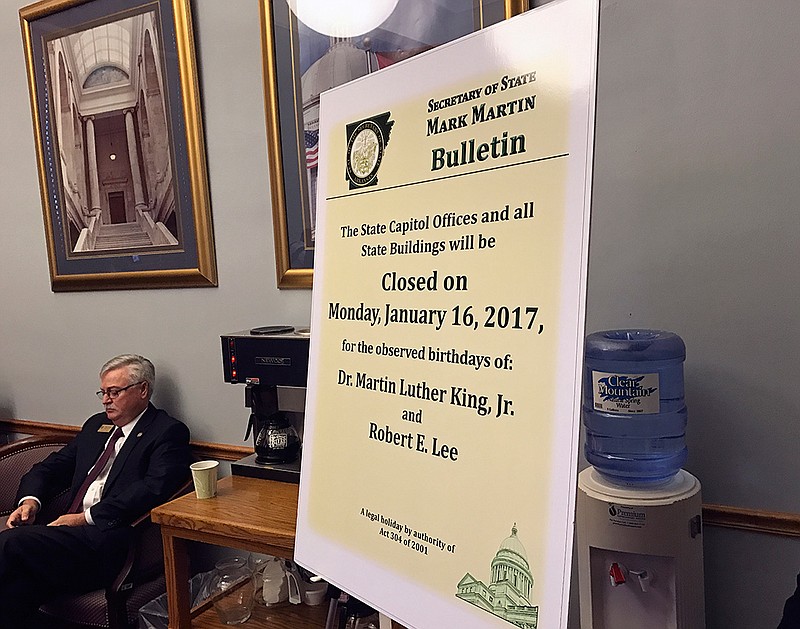 An example of the notices posted at Arkansas state offices marking the dual holiday honoring Confederate Gen. Robert E. Lee and slain civil rights leader Martin Luther King Jr. is displayed at a Senate Education Committee hearing in Little Rock, Ark. The committee endorsed a proposal to remove Lee from the King holiday, sending the proposal to the full Senate.

The Senate voted 24-0 in favor of the proposal to remove Lee from the state and federal holiday honoring King on the third Monday in January. Only two other states, Alabama and Mississippi, honor the men on the same day.

The proposal would designate the second Saturday in October as a state memorial day, not a holiday, to honor Lee. It also requires the state to expand what is taught in schools about civil rights and Civil War history.

Republican Gov. Asa Hutchinson has urged lawmakers to approve the change, which he says would help unify Arkansas and improve its image.

"While both men have left their mark on history, dually celebrating them, as we have done in Arkansas since 1985, is an obvious incongruence," Hutchinson said in a statement after the vote.

A similar effort to remove Lee from the King holiday repeatedly failed before a House committee two years ago after opponents said it belittled Arkansas' Confederate history. Eleven Senate Republicans didn't vote on the latest measure Tuesday, though some expressed reservations about the move.

Republican Sen. Gary Stubblefield, who called King a hero, questioned the benefit of the move.

"I don't think that changing a day is going to improve our race relations. I just don't think it will," Stubblefield, who didn't vote on the measure, told reporters.

Both Lee and King were born in January. Arkansas has had a holiday in honor of Lee since 1947 and one for King since 1983. That year, agencies required state employees to choose which two holidays they wanted off: King's birthday on Jan. 15, Lee's birthday on Jan. 19 or the employee's birthday. In 1985, the Legislature voted to combine holidays.

Supporters of ending the dual holiday include the city of Little Rock and Pulaski County, which passed resolutions last year endorsing the move. The 2015 effort to end the dual holiday was fueled in part by photos widely circulated on social media of a sign noting the shared King and Lee day.