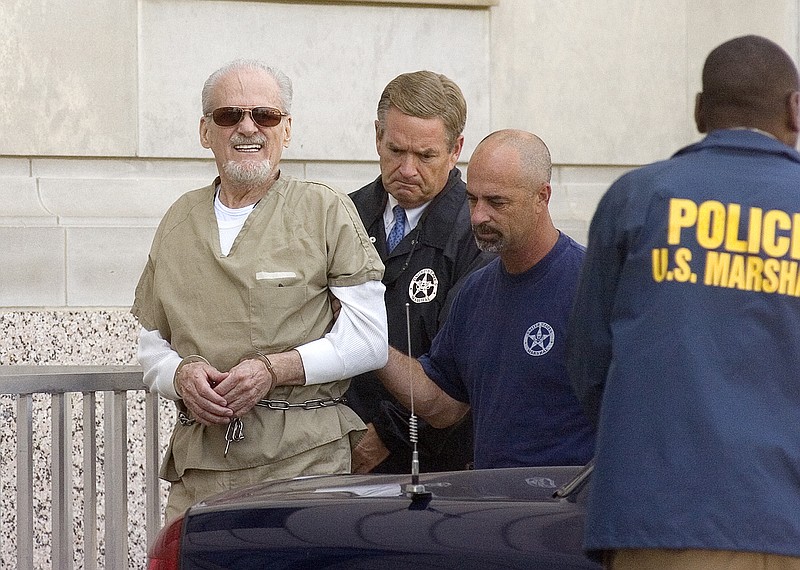 Evangelist Tony Alamo is led from the federal courthouse Monday July 13, 2009, in downtown Texarkana, Ark. He was convicted on 10 counts of bring five young girls across state lines for sex Friday, July 24, 2009, and sentenced to 175 years in prison later that year. Alamo died Tuesday, May 2, 2017, in prison.

Imprisoned evangelist Tony Alamo, whose given name is Bernie Lazar Hoffman, died Tuesday at the age of 82, while in custody at the Federal Medical Center in Butner, N.C., according to a spokeswoman for the Federal Bureau of Prisons.

Alamo was convicted in July 2009 by a jury in a Texarkana federal court of bringing five girls he wed as children across state lines for sex. Later that year, he was sentenced to 175 years in federal prison by U.S. District Judge Harry Barnes in the Texarkana Division of the Western District of Arkansas.

Alamo began calling himself a pastor and evangelist in 1969. Alamo's followers lived on communal properties including compounds in Fouke and Ft. Smith, Ark., owned by the ministry. Most worked as "volunteers" for the group. Members weren't allowed to amass savings, own personal property, or communicate with outsiders, except to attempt to recruit them.

The group owns properties in California and once held real estate in Dyer, Ark., and Oklahoma. Alamo's devotees ran sham charities and sold rhinestone studded jackets to fund the ministry.

Since Alamo's conviction, former wives and others who claim they were harmed by life in Alamo's closed, cultic society have sued and won millions in damages. The suits have led to the sale of Alamo properties in Fouke and Fort Smith, to help satisfy the judgments.

Texarkana lawyer David Carter secured judgments totaling more than $500 million against Alamo on behalf of former wives and others who were mistreated as children raised in Alamo's community.

"I personally would have preferred that he serve every day of his 175-year sentence," Carter said. "While I'm sure his death will bring closure for many of his victims, he actually became irrelevant in my mind as soon as he was convicted. Nothing is more despicable than wrapping the sadistic abuse of children in the cloak of religion, which is exactly what he did."

Witnesses at Alamo's trial and in civil cases testified that children and adults were publicly beaten, forced to fast, denied education and required to labor without pay at Alamo's direction. The group's dogma included fear and distrust of outsiders and governmental authority. Children were frequently separated from their families and Alamo often took underage brides, the youngest of whom was 8. Alamo followers were taught that abandoning Alamo, his teachings and his ministry meant eternal damnation.

Some of Alamo's followers have remained faithful and continue distribute his leaflets.

Retired FBI Agent Randall Harris was the lead investigator into Alamo's federal sex crimes and testified against him at his criminal trial.

"I have been inundated with inquiries this morning from former members, including one of the Jane Does, as well as others who had been closely involved in the Alamo case," Harris said. "After I was able to provide them with, at least, unofficial confirmation of his death, most everyone now expresses relief and hope that those who remained under Alamo's control will no longer be in fear to leave the group if they choose to do so."

A cause of death for Alamo has not been confirmed. However, at the time of his trial in 2009, witnesses testified the convicted sexual abuser suffered from diabetes and other age-related maladies.

Alamo's death provided closure to a number of people.

"We got finality," said Fouke Mayor Terry Purvis, who witness the rise and fall of the Alamo influence in his community. "The victims now have finality knowing that this guy is not on the face of this earth and he will never hurt anyone again.

"This may be weird, but usually when we hear about someone passing, we grieve. I'm happy.

Purvis said it was a great day when the Alamo property in Fouke was auctioned off.

"It gave us a true sense it was over for our city and the compound was no longer there," he said. "With his death it's totally ended. It's over. It's gone. Done."

Carter said Alamo's legacy is not in his teachings.

"What will endure long after Tony Alamo is forgotten is the legacy of his courageous victims who faced him in court and ensured that the cycle of abuse would not be repeated. The case is also a great example of our justice system meting out punishment to the guilty, and providing some measure of relief to innocent victims," Carter said. "When Judge Barnes sentenced Alamo, he told him he would have to answer to a higher authority some day. That day has come."