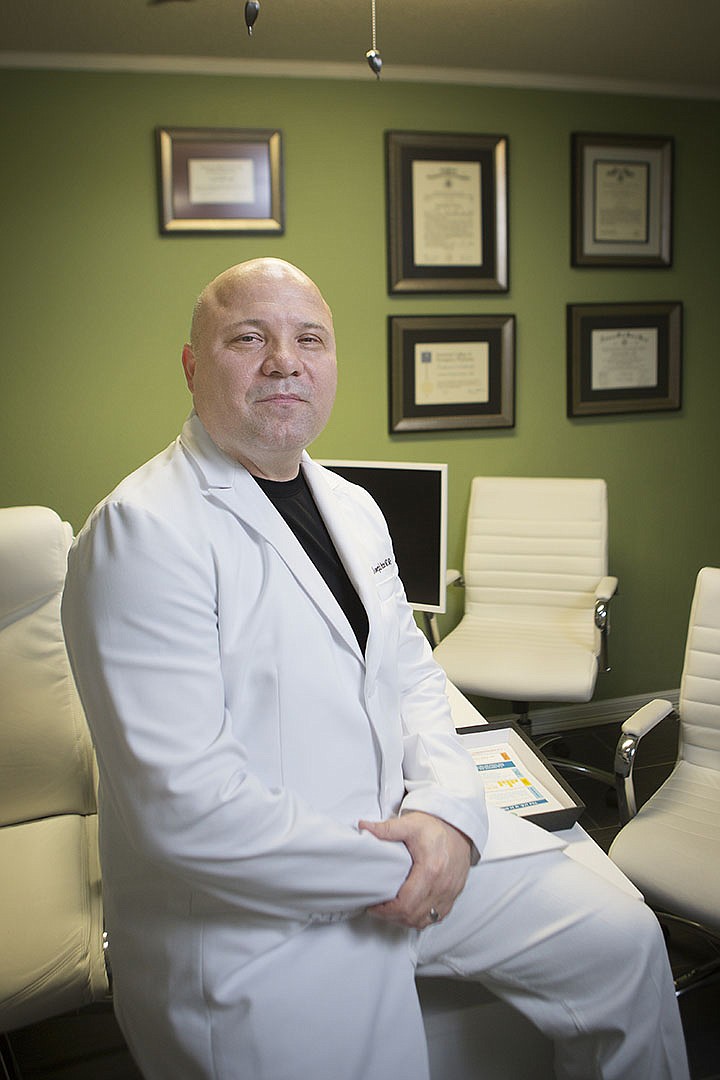 Dr. Joseph Parker is Texarkana's only physician so far to go public with the decision to authorize patients' medical marijuana use. Arkansas voters elected last November to legalize the drug for treatment of certain medical conditions.

As Dr. Joseph Parker sees it, he has little choice except to prescribe medical marijuana-even though doing so may raise some eyebrows in Texarkana, Ark.

"I was reluctant initially to agree to prescribe it, because you know anytime there's a change in policy, whichever doctors agree to consider it first, people who disagree with that decision are going to look at harassing or attacking them. You put yourself out for a little scrutiny, and that wasn't what I was looking to do.

"But I had patients who were suffering terribly on medications that could be very harmful to them under the wrong circumstances, or even if they use it just like it's prescribed, sometimes things don't go well," he said in an interview Thursday.

"As doctors you have to look at using the safest medication possible to relieve someone's suffering."

Parker is Texarkana's only physician yet to go public with the decision to authorize patients' medical marijuana use. Arkansas voters elected last November to legalize the drug for treatment of certain medical conditions.

Despite the stereotype of a marijuana doctor as a thinly veiled drug dealer, Parker will not be handing out prescriptions to anyone who asks. His criteria are clear and stricter than state regulations: To get a prescription from him, a medical cannabis patient must be diagnosed with a qualifying condition by a different physician and willing to reduce use of a more dangerous drug.

Anyone coming to him expecting a bogus diagnosis and rubber-stamp prescription will be very disappointed, he said.

"I'm not going to have someone come in with no prior diagnosis, say they have anxiety and that they need this medication," he said. "I want to make sure it is available to those it helps."

Patients suffering from a variety of ailments-from appetite loss caused by chemotherapy to post-traumatic stress disorder to chronic pain brought on by nerve damage and more-could benefit from using marijuana, Parker said. And in doing so, they avoid the risks involved with many other drugs, especially the addictive opiate painkillers that have caused a nationwide epidemic of overdoses in recent years.

By contrast, cannabis may be habit-forming for some people, but it is not addictive and has never killed anyone.

"We prescribe stuff all the time that we know has a high addiction risk, if the patient has a condition that warrants treatment with that to relieve their suffering. But a certain percentage of them are going to go on to have a severe addiction to those substances.

"Whereas marijuana, you may want it, you may actually crave it at some point, but you'll never die without it. If you get hooked on methadone and you stop it abruptly, you can die," Parker said.

One 2014 study published in JAMA Internal Medicine showed that, in the 13 states that passed laws allowing for the use of medical marijuana between 1999 and 2010, 25 percent fewer people died from opioid overdoses annually.

Cannabis can treat anxiety more safely than the class of tranquilizers called benzodiazepenes, including the popular drug Xanax, Parker said.

"If you start taking (Xanax) scheduled daily, it loses its efficacy and actually starts having some rebound effects. You need more and more and more frequently, and then your doctor says, 'Oh look, you're using too much' and cuts you off, and then you have seizures or other horrible panic attacks," he said.

In research trips to Colorado and Nevada, both of which legalized medical marijuana in 2000, Parker learned that cannabis is effective enough that many patients prefer it to other medicines.

"When patients (in Colorado) are asked to give up one or the other, either the opiates they're on or the marijuana, they choose to give up the opiates. Patients who are paraplegic have been willing to give up Valium if they can use medical marijuana. Well, Valium kills thousands of people a year; marijuana does not. So medically it should be a very quick choice," he said.

In addition to relieving chronic, severe pain, marijuana can work "extraordinarily well" for spasms caused by nerve damage and seizures, especially in children, Parker said. And one recent study showed that a certain kind of cannabis "not just slows the progression of Alzheimer's but appears to have some reversing effects."

Smoking anything is bad for the lungs, so Parker plans to recommend edible preparations of marijuana, oils containing its active ingredients and topical formulations that can be rubbed in through the skin.

Beyond that, his advice will not necessarily be specific. Patients can depend on medical marijuana dispensaries' years of experience matching strains of cannabis to particular diagnoses, and finding the right dosage can safely be a matter of trial and error, he said.

Though patients are beginning to apply for medical marijuana certification, it is unclear when a fully functional farming and distribution system will be in place to satisfy the demand. The Arkansas Medical Marijuana Commission is reviewing hundreds of license applications for the five cultivation centers and 32 dispensaries allowed. Those businesses awarded licenses will then have to build their facilities and grow a crop. Laboratory testing and transportation of the product are also factors, with no rules yet in place for either.

Whenever the Arkansas cannabis industry is ready to provide patients with the medicine he sees as obviously beneficial, Parker will be ready to ensure his patients can get it-without any stigma associated with recreational use.