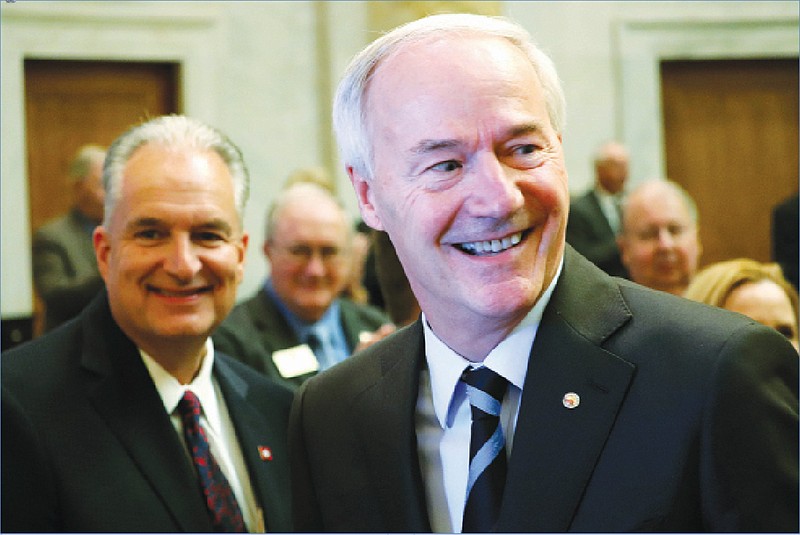 Arkansas Gov. Asa Hutchinson prepares to speak to a joint session of legislators Monday at the state Capitol in Little Rock. Behind him is Arkansas Treasurer Dennis Milligan. The governor told lawmakers that next year he would like them to cut the state's top income tax rate from 6.9 percent to 6 percent, a move that would save Arkansas' top earners $180 million annually.

LITTLE ROCK-Arkansas' governor called for cutting income taxes for the state's top earners by $180 million on Monday, and said his plan to set aside surplus money will help set the stage for that reduction when lawmakers take up the proposal next year.

Republican Gov. Asa Hutchinson said he'll push next year for cutting the state's top rate from 6.9 percent to 6 percent for those making more than $75,000 a year. Hutchinson issued the recommendation as lawmakers convened for an abbreviated session focused on the state's budget.

The proposal follows two other tax cuts Hutchinson has successfully shepherded through the Legislature since taking office three years ago: a $100 million tax cut for those making between $21,000 and $75,000 a year in 2015 and a $50 million cut for those making less than $21,000 last year. Arkansas' median household income is about $42,000 a year. State finance officials say the latest proposal would affect about 162,000 of the state's 1.5 million taxpayers.

Hutchinson, who is seeking re-election, said he'll push for the tax cut next year.

A legislative task force is expected to come up with its tax cut recommendations later this year.

"It is important to achieve this in order that we have continued success in job creation and economic growth," Hutchinson told a joint session of the House and Senate.

Hutchinson didn't offer specifics on how the state could pay for the reduction in revenue, but said the task force should look at closing some tax exemptions "that have outlived their usefulness" or finding savings elsewhere in state government. He said he believed the cuts could be made without jeopardizing essential services.

Hutchinson touted his proposed $5.6 billion budget for the coming year as lawmakers convened for an abbreviated "fiscal" session. Hutchinson's proposal calls for setting aside a projected $64 million surplus, with most of the funds going toward the reserve fund for tax cuts.

"This is the right budget for Arkansas because it is conservative in spending, it increases our savings and it invests in the future of our state," Hutchinson said.

Hutchinson kicked off the session as he and other supporters of the state's hybrid Medicaid expansion face questions about whether there's enough support in the Legislature to continue the program.

Three vacancies in the state Senate have left supporters short of the three-fourths approval needed to approve the budget bill for Medicaid and the hybrid expansion, which uses federal and state funds to buy private insurance for low-income residents. Most budget bills require a three-fourths vote in both chambers of the Legislature to win approval.

Hutchinson told lawmakers he expected approval before the end of this year's session for the state's plan to require some on the program to work. The Trump administration last month said it would allow states to impose work requirements on Medicaid. Hutchinson has said the requirement's approval will help win more votes for the program's continuance.

The governor's call for further tax cuts drew skepticism from Democrats who have complained his proposed budget this year is building up a surplus at the expense of other needs.

"We're already to the point where we feel like a whole lot of our priorities are either underfunded or not funded at allAt some point, we're not going to be able to pay the bills," House Minority Leader David Whitaker said.

The plan, however, won praise from some Republicans who said it would follow through on Hutchinson's call for across the board cuts after advocating reductions for low- and middle-income earners.

"It's time for everyone to get some of the fresh air we've been passing around," Republican Sen. Bart Hester said.