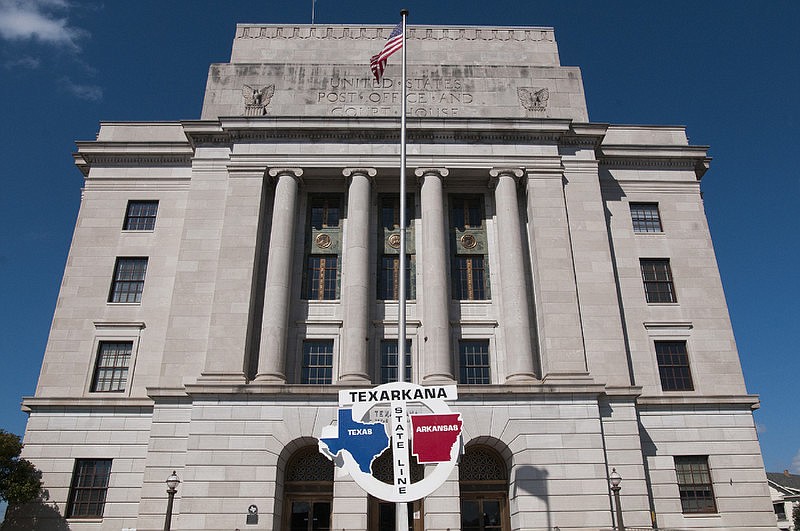 The next project on Main Street Texarkana's list is the Courthouse Square Initiative. The Federal Courthouse, the No. 1 tourist attraction in Texarkana, was built in 1933. (Gazette file photo)

It was created as a study to show how a stable stream of incremental, low-cost, and highly visual improvements to a downtown's smaller, commercial historic buildings provides great opportunity for significant and positive impact.

The program was implemented with the Texas Main Street Program, and Texarkana was chosen as the mid-size community, with San Augustine as a small-town community (population 2,000). Each town was given $40,000 to disburse in the form of grants and loans with zero interest for three years.

Main Street Texarkana Executive Director Ina McDowell manages this program along with development programs on the Arkansas side of the state line.

When San Augustine wasn't able to use all of its grant, that money also flowed into Texarkana projects.

The funds from the project were used by various businesses to improve their store fronts, including money for awnings, signage and landscaping. Those businesses that benefited from the program include 1894 City Marketplace, Pecan Point and the Museum of Regional History.

Her successful implementation prompted the Main Street America Program to invite her to speak at their national conference, held earlier this year in Kansas City, Mo.

Main Street Texarkana has the distinction of being one of only two twin city programs in Main Street America, the other being Bristol, Tenn./Va.

The Main Street office in Texarkana is located in the Chamber of Commerce building on State Line Avenue.

McDowell was raised in Texarkana and has always been interested in its local history-an important element of downtown redevelopment.

"I just love our history, and it's exciting to show it off," McDowell said. "Before I took this job, I volunteered at the Texarkana Museum Systems. Every Sunday afternoon for 16 years, I gave tours at the Ace of Clubs house."

The next project on her Main Street list is the Courthouse Square Initiative. The No. 1 tourist attraction in Texarkana was built in 1933 directly on the state line by the federal government and is the only courthouse in the U.S. that is not owned by a state. According to Tripadvisor.com, it is also touted as the second most-photographed courthouse, just under the Supreme Court Building.

"Thousands of people come every year to have their picture made in front of the courthouse," she said. "It's our No. 1 tourist attraction and the front door to downtown."

McDowell gets asked about many of the projects going on downtown, including, restoration of Hotel Grim.

"Over the years I've seen a lot of people show interest in the hotel," she said. "Many ask about buying it and some just want to tour it, which isn't allowed for safety reasons."

An effort has been underway for several years now to rehab the Hotel Grim into retail space and apartments.

"The Harrell Building, beside the Grim, is also an interesting piece of architecture, along with Union Station," Ina said.

Plans are underway to turn The Coliseum on Broad Street into apartments.

On May 12, as a tip to Historic Preservation Month, Main Street hosted the "Imagine the Possibilities" tour, which allowed the public to tour several vacant buildings in the downtown area. It was part of Railfest weekend downtown.

"I really see a renewed spirit for our downtown among all generations," McDowell said. "I'm very proud to be a part of making it fresh and exciting for today."