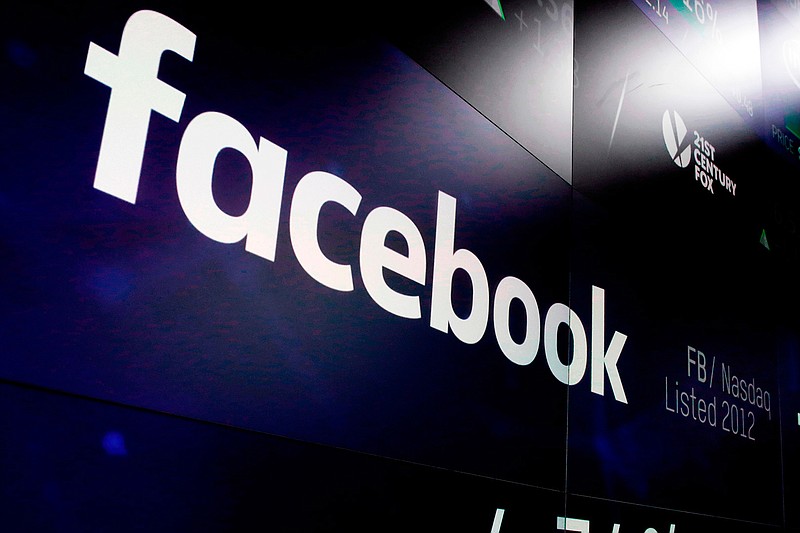 In this March 29, 2018, file photo, the logo for Facebook appears on screens at the Nasdaq MarketSite in New York's Times Square. Facebook's user base and revenue grew more slowly than expected in the second quarter of 2018 as the company grappled with privacy issues, sending its stock tumbling after hours. (AP Photo/Richard Drew, File)

The lawsuit was filed Monday in Houston against Facebook, the shuttered classifieds site Backpage.com and the owners of two Houston hotels.

The suit seeks at least $1 million in damages on behalf of a woman identified as "Jane Doe," who was 15 years old when she was sexually assaulted in 2012 after being allegedly targeted and recruited by a sex trafficker on Facebook.

According to the lawsuit, Facebook should be held liable for the conduct of sex traffickers because the social media site has become the "first point of contact between sex traffickers and these children. Facebook not only provides an unrestricted platform for these sex traffickers to target children, but it also cloaks the traffickers with credibility."

Annie McAdams, an attorney for the woman who filed the suit, said her client was befriended by another Facebook user who gained her trust and promised her a job as a model.

But, McAdams said, the other person forced her into sex trafficking within hours of meeting her. She was raped and beaten by people who had paid the trafficker, the attorney said.

McAdams alleged Facebook has not done enough to ensure that users aren't able to hide their identities from unsuspecting minors who may be targets of traffickers or to warn minors of the dangers posed by traffickers and how they can operate online.

"It was not just because a pimp did something that Jane Doe was trafficked. That pimp is not able to traffic Jane Doe unless Facebook allowed him access to her," McAdams said.

The legislation was focused more on classified-ad sites like Backpage.com, which had claimed they aren't the publisher of questionable content but are merely transmitting posts by others.

Backpage.com was shut down by federal authorities earlier this year after the company's co-founders and other employees were arrested in what authorities say was a scheme to publish ads for sexual services, some of which involved children.

"Facebook has the technology to be able to potentially develop algorithms to look for the indicators and the red flags of potential (trafficking) exploitation and abuse," said Tony Talbott, director of Abolition Ohio, a University of Dayton group that works to combat human trafficking.

Maya Simek, co-director of the Human Trafficking Law Clinic and a lecturer at Case Western Reserve University's School of Law in Cleveland, points to a lack of ID verification and a lack of advertisements or other outreach efforts to offer help for victims as some of the problems social media sites face in combating human trafficking.

"I don't think they're doing as much as could be done," Simek said.

Talbott said he thinks the Houston lawsuit will have a difficult time proving that Facebook knowingly facilitated sex trafficking, as the company could show that traffickers are simply exploiting the site.