A link to the past: Group gives medal to grandson of Confederate veteran 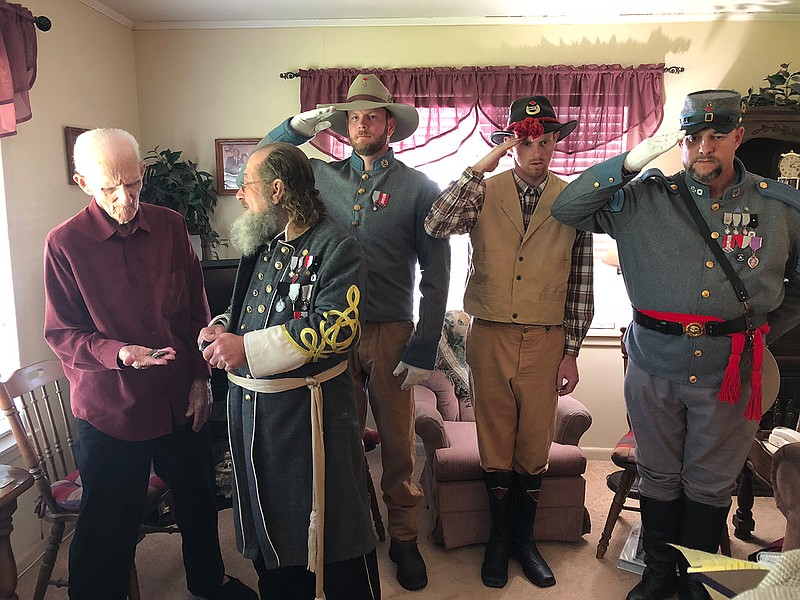 NEW BOSTON, Texas-While all surviving Civil War Confederate soldiers and their children are now deceased, a few grandchildren of these soldiers are still alive-one of them lives in New Boston.

The organization presented the medal to Barfield after one of his distant cousins, Deloris Gueterman, notified the group of her relative's comparatively rare status.

"Our organization wants to thank you, Mr. Barfield, for giving us this honor of presenting this medal to you," said Phil Maynard, commander of Red Diamond Camp 2193. "We surely count this as a real privilege to get a chance to meet and see someone who is still an actual living grandchild of a Confederate soldier."

Barfield is the grandson of Confederate States Army Pvt. Rhitt Barrett "Barto" Barfield Sr., who served in the Confederate Cavalry. Rhitt Barfield was born Oct. 15, 1838, in Georgia. He died Nov. 20, 1885, at age 47 in the city of Old Boston after he moved to Bowie County in 1868. He worked as a farmer and a businessman, running both a hotel and saloon in the county. He is buried in Barfield Cemetery, which still exists in Bowie County.

"This is the first time that our organization has been able to locate an actual grandson of a Confederate military veteran," Maynard said.

"This is a special occasion because grandchildren are usually the last ones living who have actually had direct contact with their grandfathers-grandfathers who went through major historical events in our history."