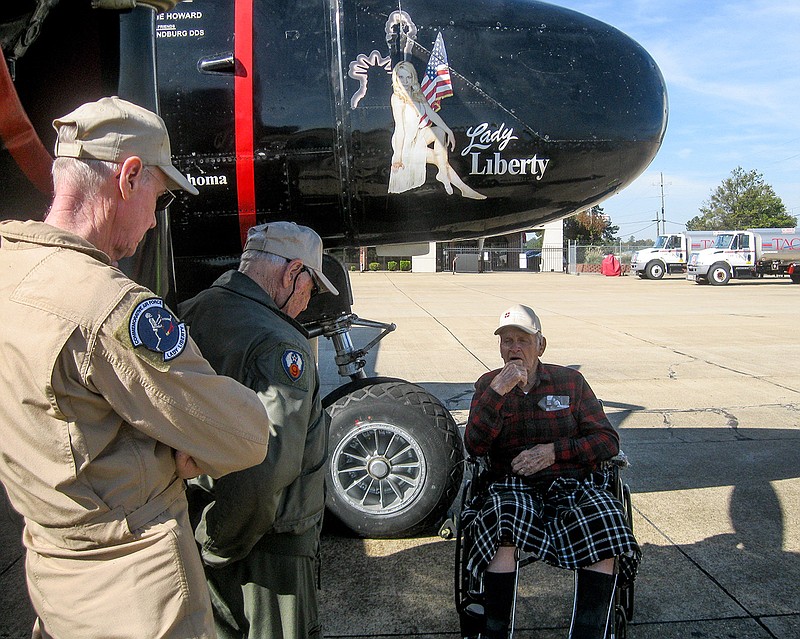 Former U.S. Army Air Force Capt. Ralph Miller, right, talks to Commemorative Air Force Flight Museum crew members about the museum's World War II A-26 Invader warplane, which flew strafing combat missions over Europe during the war. Miller, himself a WWII veteran, got the chance to fly an A-26 in the spring of 1944 while stationed in Lake Charles, La.

Miller got the chance Monday to see a warplane he hadn't flown since being stationed in Lake Charles, La. in the spring of 1944 as a bomber pilot with the U.S. Ninth Tactical Air Force in Europe during World War II,

"I remember when I first saw one of these and that's when my senior officer asked me if I could fly one of these things and I told him that if the plane flew like a bee, I could," Miller, who will be 99 years old next month, said. "At that point, we took off and flew about 3,00 to 4,000 feet off the ground for a little while-circling around the Lake Charles area."

Although Miller would eventually be deployed to Europe in August 1944 and be assigned to fly a similar warplane to the A-26 called the Martin B-26 Marauder, he never forgot the Invader.

"I spent my spare time looking at that plane's engineering records, flight records and flight maps," said Miller, who has lived in Texarkana, Texas, since 1950. "I fell in love with that airplane and the memory of that plane stayed on my mind as if seeing it for the first time, just happened yesterday."

As Miller regaled the CAF's A-26 flight crew with stories about anti-aircraft shells exploding around him during air combat missions and bombing missions during the war, Jammer Smith, the A-26's current CAF pilot, said he was captivated by Miller's first-hand account of air combat missions flown over Europe near 74 years ago.

"Hearing an actual first-hand account like this is truly incredible because it's very rare nowadays to find pilots who actually flew the A-26 back then," Smith said. "This is very enthralling."

Besides remembering the bombing missions he flew back then, Miller also remembered having to get through the enemy's anti-aircraft fire from the ground.

"I've been as high up at 16,000 feet, but normally we usually flew only as high as 12,000 to 13,000 to 14,000 feet while we were on bombing missions in Europe," said Miller, who went on to win 11 Air Medals and the Distinguished Flying Cross during the war. "When those anti-aircraft flak shells exploded around us, you could see the black smoke puff coming out of those orange balls of fire and the hot shell fragments would sound just like gravel being shaken in a tin can when they hit the side of our plane."

Although Miller saw the A-26 Invader perform during an air show in Midland, Texas about 12 to 15 years ago, he thought he would never get a chance to see it up close again until the chance for that started taking root within the last year. That's when one of his nephews, Todd Miller Bemenderfer of Indiana got the idea of having an A-26 fly over Miller's Texas-side house.

"I started writing letters to historic aviation organizations about my uncle's experience flying the B-26 and A-26," Bemenderfer, who became a pilot because of his uncle's influence, said.

Bemenderfer finally made contact last year with Julie Larcher, an events coordinator with the CAF.

During the summer of 2017, Larcher's husband, Kent Larcher with Federal Aviation Administration, called Bemenderfer and told him that the CAF would do better then just fly an A-26 over Miller's house . They would actually fly out to Texarkana and show Miller the plane. Although that Texarkana visit had to be delayed one year because the aircraft needed new fuel tanks, the CAF managed to fly the A-26 down from an air show in Little Rock last weekend to pay Miller a visit.

"Last month I got the call that they could be here and it's been an amazing day to see them here," Bemenderfer said. "Ever since I heard Ralph's stories when I was a kid, I've wanted to fly. My uncle is the reason I became a pilot."