Boozman touches on trade, infrastructure at Chamber breakfast in Texarkana 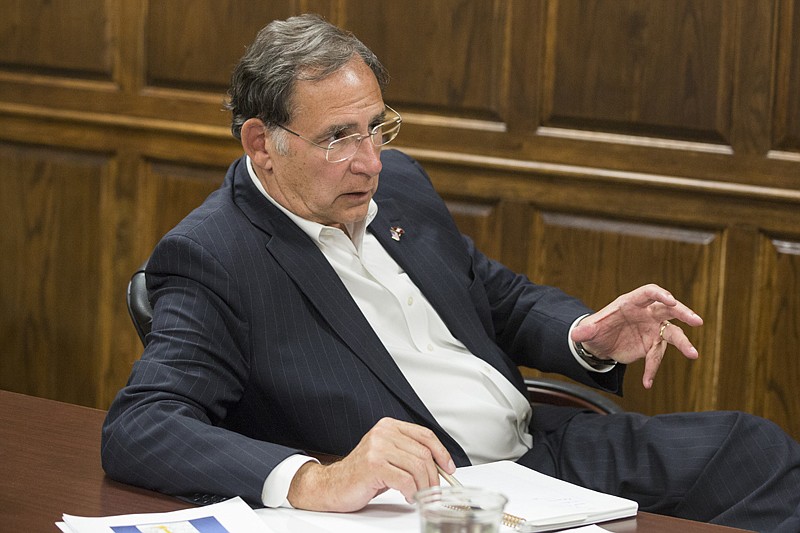 U.S. Sen. John Boozman of Arkansas speaks with reporters Monday at the Texarkana Chamber of Commerce.

TEXARKANA, Ark. - Sen. John Boozman spotlighted trade policy and a highway bill in brief remarks to the Chamber of Commerce on Wednesday.

Boozman, R-Arkansas, spoke to Chamber members over breakfast at First United Methodist Church on East Sixth Street. The stop was part of a statewide tour during a Senate recess. From Texarkana, he planned to visit the Domtar Paper mill in Ashdown and Southern Arkansas University in Magnolia later in the day.

Partisan dysfunction in Congress does not normally affect "the underpinnings of the country" such as funding for infrastructure or recent criminal justice reforms, Boozman said. He expressed confidence that the federal Highway Trust Fund, which provides about 40% of states' transportation funding, will be reauthorized.

Other infrastructure improvements such as providing broadband internet service to rural parts of the country would benefit the economy, as well, he said.

Uncertainty in international trade policy hurts American business, so resolving issues such as a new pact to replace the North American Free Trade Agreement is a high priority, he said.

Boozman was unequivocal in his condemnation of Chinese trade practices and complimented President Donald Trump's efforts to challenge China with import tariffs.

"The Chinese, they lie, they cheat, they steal, they manipulate, and that language is not too harsh," he said. "That is definitely true about them. They don't play by the rules, so we have to get a situation where they do.

Boozman said he believes "reasonable work requirements" for Medicaid access, such as those enacted in Arkansas, are acceptable, and he recommended adding drug testing as a requirement.

A former University of Arkansas football player and optometrist, Boozman represented Arkansas' 3rd Congressional District in the U.S. House of Representatives from 2001 to 2011. He was elected to the Senate in 2010 and re-elected in 2016.

He serves on the Senate's agriculture, appropriations, budget, environment and veterans' affairs committees.