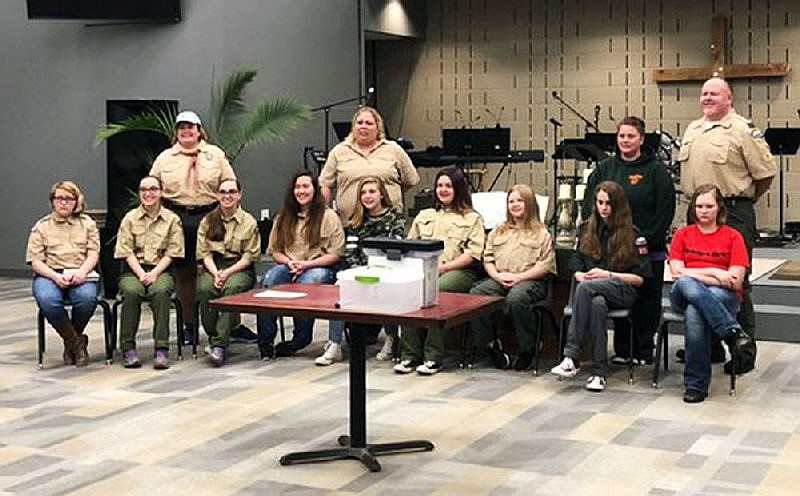 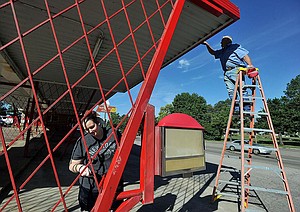 Photo by Michael Woods
NWA Media/Michael Woods --09/24/2014-- w @NWAMICHAELW...Gerald Clayton and his daughter Heather Gibbins work on putting on a new coat of paint onto the side of the Dairy Freeze drive-in Wednesday morning in Fort Smith. The family run business has been serving local residents since the '50s

BRYANT, Ark. - Ten girls stood in a single line alongside the Boy Scouts of Troop 17 and raised three fingers on their right hands as they recited the Boy Scouts oath during a ceremony Tuesday night in the First United Methodist Church of Bryant.

"This is actually a really great honor to be the first girl, female troop in Saline County," said 11-year-old Emily McEuen.

All-girls troops are starting to crop up elsewhere in the state, too.

All-girls troops have formed in Conway, White Hall and Cabot since the Bryant troop's induction, and the council plans to add 10 or 12 more all-girls troops in the next month, according to Marcal Young, Scouts executive and CEO of the Quapaw Area Council.

An all-girls troop was chartered Feb. 1 in Fort Smith, which is part of the Westark Area Council in Northwest Arkansas, said Christian Swaim, an assistant Scouts executive with the council.

Boy Scouts of America began accepting applications for all-girls troops in February for girls ages 11-17. The all-boys troops and all-girls troops follow the same program and offer the same opportunity to earn the rank of Eagle Scout, the highest rank attainable in the program.

Members of Bryant's Troop 19 hope the troop serves as a model for other states that have yet to add all-girls troops to their ranks, Scoutmaster Tim McEuen Scout said.

"We want other states to look at us and think, 'wow'" said McEuen, who has two daughters in the troop.

For decades there have been Scouting programs in other countries for boys and girls together, but the Boy Scouts program here remains single gender, chartering only all-boys troops or all-girls troops.

The decision to allow all-girls troops drew criticism from some, most notably the Girl Scouts of the USA organization, which accused the Boy Scouts of trying to replenish its diminishing numbers with girls.

But Young said allowing girls to join allows all family members to participate in the Boy Scouts. Some of the girls who joined Bryant's Troop 19 have brothers in Troop 17.

Araina Simmons, 14, said she has a brother involved in Scouting. She has followed along as he learned skills and is excited to be a part of the Scouts and getting the opportunity to master the same program herself.

The program will teach the girls traditional Scouting skills such as hiking and camping but also will teach such things as developing financial responsibility and leadership. McEuen said the intention is to let the girls lead the group while he acts as a guide.

There are 135 merit badges that girls will be allowed to earn, he said. The girls in Troop 19 will also get a badge for founding their group.

Information from Alex Gladden at the Arkansas Democrat-Gazette, Arkansas Online.