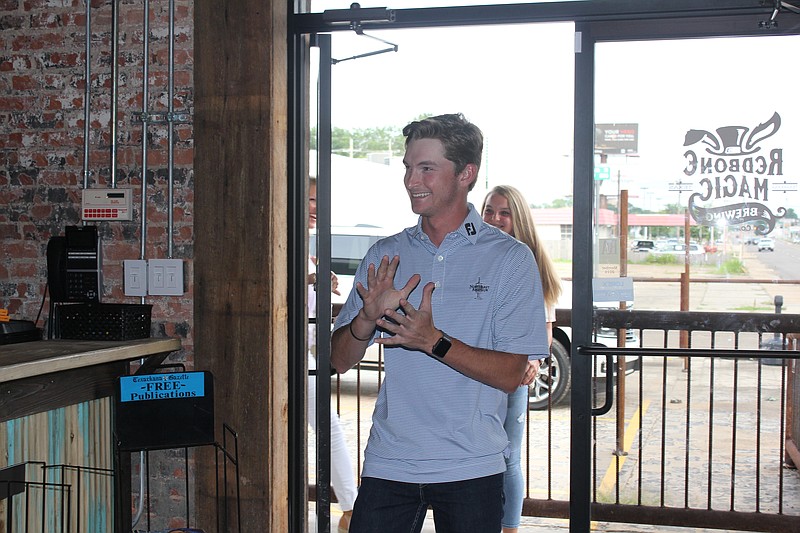 Garrett May walks into Redbone Magic Brewing on Monday in Texarkana, Texas.

Garrett May won the Northeast Amateur golf tournament on Saturday and was honored with a surprise party and a Certificate of Accomplishment from the City of Texarkana, Texas, at Redbone Magic Brewing on Monday.

May, surrounded by family and friends, walked through the doors of the restaurant/brewery with a big smile and a bit of a shocked look on his face.

May is a 2015 graduate of Texas High School and recently graduated from Baylor University, where he played golf. He was a standout golfer for the Tigers under head coach Jay Brewer.

"The best thing about Texarkana is the community," May said. "Everyone is really close and everybody knows everybody; which isn't bad. I love calling this city home. I have so many friends and family here, and they create a great support group around me.

"My ultimate goal, in golf terms, is to be the best player in the world. In life terms, I want to have an impact on anyone and everyone that I come into contact with."

Texarkana, Texas, mayor Bob Bruggeman presented May with a Certificate of Accomplishment as an outstanding golfer.

It was May's incredible start that made the difference when he won the Northeast Amateur at Wannamoisett Country Club in Rumford, R.I. on Saturday.

The Northeast Amateur is considered a major among amateur golfers and is ranked No. 4 in the long list of over 700 U.S. amateur golf events.

May told GolfDigest.com, "After I lost the five-shot lead, I was reeling. Then I thought to myself that I was still tied for the lead and they hadn't given the trophy to anyone else yet. I just dug in and said, 'We are going to be patient and we are going to do this.'"

May began the day at 12-under but would finish the tournament with a 7-under after shooting a 5-over-par 74 on Saturday.

"I was very happy and overflowed with joy when I won," May said. "I was also humbled and honored because so many great and historic golfers have won the event-Ben Crenshaw and Dustin Johnson. To be on the same list as them is humbling."

Crenshaw won the tournament in 1973, and Johnson earned the top spot in 2007.