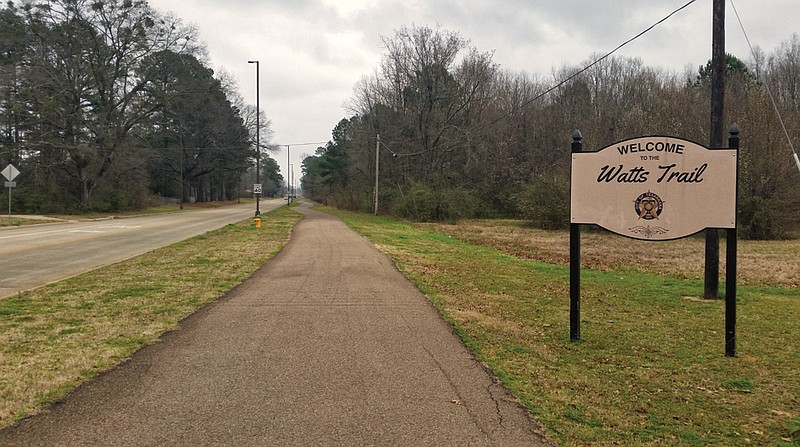 The sign near the corner of Robin Lane and Cowhorn Creek Road announces the Watts Trail.

EDITOR'S NOTE: This is the second in a three-part series

on trails in Texarkana.

The walking trails near St. Michael hospital and First Baptist Church on Moores Lane are known by many names, or no name at all.

They share a stretch of northern Texarkana, and we'll simply refer to them as the Watts and Sister Damian trails. Combined, they provide 4 to 5 miles of footpath.

The first one is the Watts Trail. According to the city-maintained signs posted at either end of the trail, it runs along Galleria Oaks Drive behind First Baptist Church, stretching from Cowhorn Creek Road to Robin Lane.

The asphalt trail is 12 feet wide and gently winds between a road and a swampy, wooded area alive with frogs and toads croaking their hearts out in the early-morning hours.

If you've never heard an amphibian serenade, hop over to Watts Trail around 6 a.m. for a concert in the wild. It's actually rather soothing.

One gentleman who lives in the neighborhood triangle bounded by Robin, Richmond and Galleria Oaks says he likes to use the trail but he wishes it had sidewalks along Robin Lane. Otherwise, getting to it from his street can be dangerous when there is heavy traffic on the road. He went on to say with a laugh that Texarkana has fewer sidewalks than any town he's ever seen.

Most people who take the Watts Trail don't stop at Robin Lane. They continue across Robin and take the new sidewalk on down to Richmond. Galleria Oaks continues on the other side of Richmond to the Arista Apartments behind Ironwood Grill and Amigo Juan. Some of the younger tenants there use the extended trail/sidewalk for running early in the morning, LED lights flashing on their ankles, wrists and chests. There are plenty of street lights for safety.

Timothy Lewis, who works for Freeman Landscape and lives off Airline Drive and Richmond Road, says he enjoys having a well-lit area where he can run in the morning before he goes to work. Some of the neighborhoods he goes through on the way there and back don't have lights, so the Watts Trail lights are a bright spot.

Across Cowhorn Creek going east toward Summerhill, there is another city sign, with a bench nearby, informing trail users that they are now on the Sister Damian Murphy Trail.

Going straight leads to a bridge just past Hospice of Texarkana; turning right follows an arm that heads toward Collom and Carney Clinic.

So where one trail ends, another begins and then, almost poetically (think Robert Frost), diverges.

(Learn about the Sister Damian Murphy Trail in Tuesday's edition.)