Short trail at park is long on tranquility 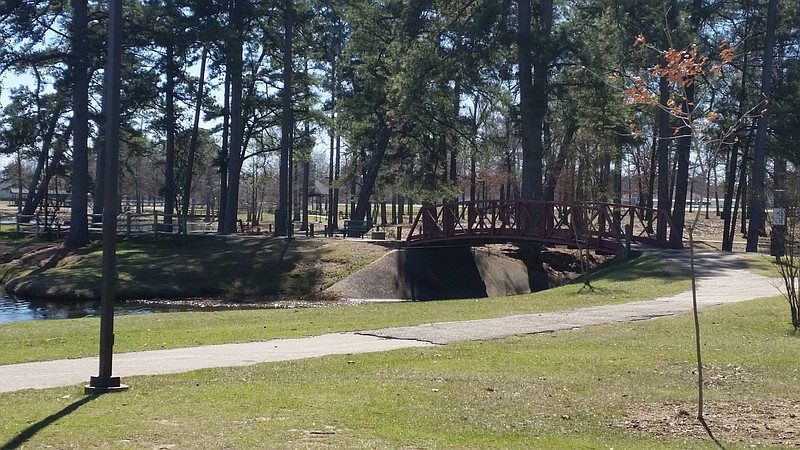 A long peninsula with a short bridge cuts across the middle of the lake, offering walkers the opportunity to take a figure 8 route.

At a little more than a mile around the lake, the walking path at Bobby Ferguson Park in Texarkana, Ark., has a lot to offer without wearing out visitors.

There is a long, thin peninsula and a short bridge cutting across the lake, so you can extend your walk to a mile and a half with a figure 8 route if you wish. There's certainly plenty to see either way you go.

Turning off Interstate 30 onto Four States Fair Parkway going south, you'll see the park sign to the left as soon as you get off the interstate. 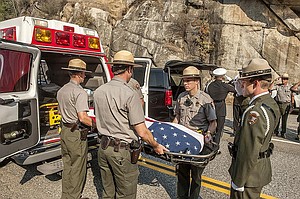 The other entrance to the park is about four blocks further. Both entrances also take you to the Four States Fairgrounds, which is behind the park.

There are friendly ducks all along the 6-foot-wide paved trail. They're so used to being fed that they come right up to you. Signs urge visitors not to feed bread to them since it's bad for them. Instead, give them seedless grapes, cooked rice, peas, corn or birdseed. You're guaranteed to have some "close encounters" whether you feed them or not.

The path around the lake is paved with asphalt, but it's not always smooth, though it's only meant for walking.

If you want to run or ride your bike, visit some of the other trails in Texarkana that are more suited to that.

On the southwest corner of the park is the Cotton Belt Cupola Gazebo, taken from the roof of the old Cotton Belt Railroad Hospital that was built by the railroad company in 1904. When the hospital was torn down, the cupola was saved and later moved to the park, where it became a popular spot for weddings. It's a shady place to rest or picnic when the weather turns hot. 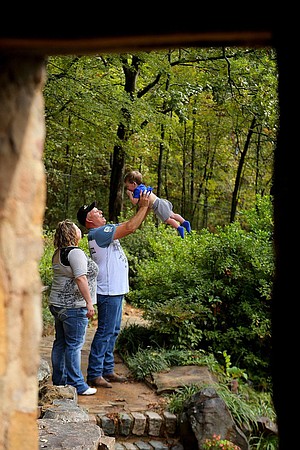 Continuing on around the lake, there are several sets of playground equipment for children. One grandmother was at the park with her granddaughters, Kylee and Kinslee.

They were enjoying one of the double-sided swings that were installed a few years ago. Their giggles could be heard everywhere.

Shady areas alternate with stretches of sun as the trail winds around the lake, so you're never in one or the other for too long. It's so tranquil and restful, with the sound of water lapping at the shore and ducks quacking, you could almost forget you're in town.

The walk around the lake is easy, but for the adventurous or for children who want to run up and down some hills, there is a wooded knoll behind the main sign. It forms a triangle-shaped peninsula pointing into the lake and covered with pine trees. The knoll overlooks the rest of the lake, providing a view through the trees most people never see.

It's worth the detour off the path to take a look.

For an easy stroll with some pleasant sights and sounds, this trail fills the bill.