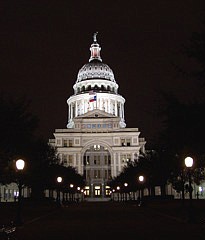 AUSTIN - Prosecutors would have another sentencing option for first time drunk driving offenders under a bill approved by the Senate Criminal Justice Committee Wednesday.

The current system, which focuses on punishment over treatment, doesn't serve the cause of public safety well, said the bill's sponsor San Antonio Senator José Menéndez. His bill would allow for deferred adjudication, a type of probation, for a first time DWI offense under some circumstances.

Consideration of the bill opened into a broader discussion of how the state treats DWI cases, with members asserting that intervention and treatment had to be critical components of combating drunk driving.

"We need to address the issue of alcohol and substance abuse addiction," Menéndez said. "It can't be just the punitive side, it has to be preventive."

Under the bill, HB 3582 by Representative Andrew Murr, this option would only be available in cases where the first-time offender was driving with a blood alcohol content of less than .15, just under twice the legal limit, and where no property damage or personal injury occurred.

As the bill came out of the House, the offender would be required to install an ignition interlock device on their car, but some members in the Senate expressed concern over this provision. Installation of the device can cost as much as $150, and along with a $60 to $90 monthly monitoring fee, it can be difficult for many to afford.

The version presented by Menéndez would permit judicial oversight, allowing a judge to consult with an alcohol and substance abuse evaluation prior to sentencing to determine if the person presents an ongoing threat to public safety. If not, he or she could waive the requirement. The bill also includes financial aid provisions for indigent offenders who are required to install an interlock device.

A person could apply to have the record of the offense partially sealed two years after successful completion of probation. It would still count on their record; should they be convicted of DWI again, it would be classified as a second offense and entail the commensurate punishment.

"I've had cases come across my desk, it's a young offender, it's a senior citizen with a pristine criminal record it's a veteran with PTSD that has gone to drinking to try and cope with it and has found themselves with that first time DWI offense," she said. "Those individuals, for first-time DWI offenses, with no property damage, no personal injury, we need to look at giving them a second chance, and that's what deferred [adjudication] does."

She highlighted the provisions regarding the substance abuse evaluation component, not just to determine if an interlock device is needed, but also what, if any, substance abuse treatment the person needs. Tharp brought a letter signed by 50 more elected prosecutors in support of the bill.

Committee chair and Houston Senator John Whitmire said he has long been frustrated with how the state deals with drunk driving offenders. Today, he said, there are five thousand people incarcerated in Texas for multiple DWIs, and they aren't getting the help they need in jail.

"If anyone thinks we're being soft on DWIs, there's five thousand lives that are ruined, away from their family, [and] we're spending millions of dollars," he said. "They go in and out of [Texas Department of Criminal Justice] for five years and get no treatment from the state of Texas prison system. And most, unfortunately, will re-offend."

"We could spend the whole session trying to make a better, workable, enforceable, tough, and smart policy on DWIs," he said. "This is not the final chapter in this war against DWIs, but it's going to have to be a combination of punishment, enforcement and treatment and early intervention."

The bill was approved by the committee and will now head to the floor for consideration by the full Senate.