Search is on for famous Idabel painter's work 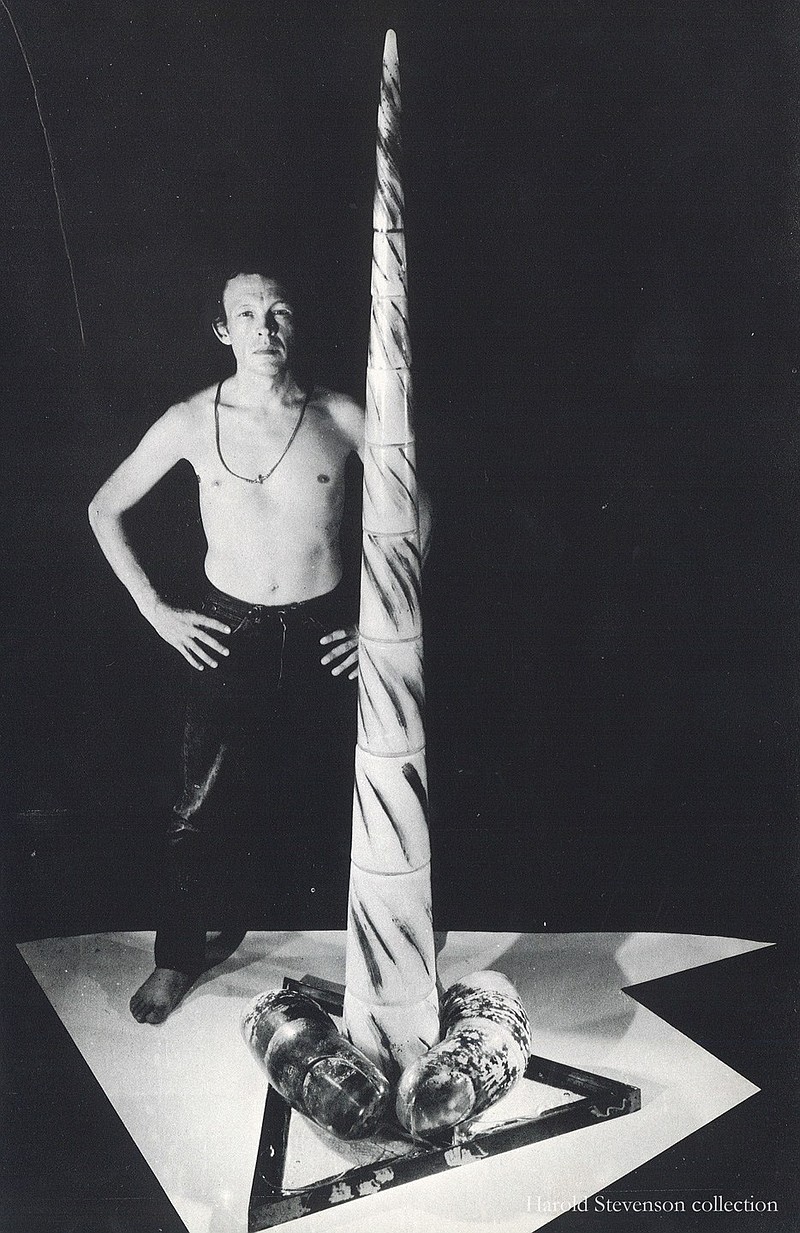 IDABEL, Okla. - Artist Harold Stevenson may have befriended Andy Warhol, studied with Robert Rauschenberg, lived in Europe and created art that landed in top galleries and shows the world over, but at heart he was always a McCurtain County boy.

Stevenson, who died roughly a year ago in his hometown of Idabel, will be the subject of a 2020 art exhibit at Museum of the Red River. It's called "Art in Community."

To that end, Dr. Dian Jordan, a professor at the University of Texas of the Permian Basin, will serve as visiting curator for the show, and she's looking for Stevenson's art that may be located in the region, including McCurtain County, Texarkana, and the surrounding areas. The exhibit will be up March 10 through June 7.

Stevenson's eclectic, challenging and unconventional art found its way to the Louvre, Guggenheim, MoMA, Smithsonian and other famous galleries. He participated in the Venice Biennale. Italian authorities seized his work, he appeared in Warhol movies and he exhibited art at the Eiffel Tower, according to his online bio.

It was a scholarship to the Art Students League New York that transported him from Oklahoma to the New York City art milieu, where his career took off.

His iconic work "The Eye of Lightning Billy" was included in a famous 1962 exhibit titled "New Realists" that also showcased Robert Indiana, Roy Lichtenstein, Warhol and other notables of the time.

Stevenson's 40-foot-long nude titled "The New Adam" is part of the Guggenheim's permanent collection, a museum where the massive, nine-panel, oil-on-linen painting was at one time yanked from potential inclusion in a Pop Art exhibit decades earlier, according to the Guggenheim website.

The '60s was the decade that people here regionally also began collecting his work, said Jordan, who's from Broken Bow and came upon the self-taught artist Stevenson while mulling potential research projects. Her academic interests are more aligned with sociology, but Stevenson fit.

She knew who he was before embarking on this research adventure with him and his art, but mostly he was known as "that crazy artist from Idabel," she admits. She'd never seen his work. She wasn't an art or art history major.

While doing adjunct teaching at UTPB, she started doctorate work in sociology at Texas Woman's University, focusing on qualitative research methods. As such, she studied content analysis and oral history. A one-hour oral history project about "someone interesting in your community" led her to Stevenson.

During Jordan's first conversation with him at his cabin in the woods, he began naming people he knew. They appeared in photographs on his dining bar. He was already 83 at the time, she recalled. One of the people who took a picture of him was Lord Tony Snowdon, who was husband to Princess Margaret - "sister of the queen of England," the researcher said.

"I'm like, is this guy joking me?" Jordan said. But it was true that Snowdon was in Oklahoma. She found an article about it. Her content analysis skills came into play.

Another person connected to these photos was Lady Jane Willoughby, a baroness and a maid of honor for the Queen Elizabeth II coronation. Stevenson snapped her pic. "I'm just sort of stunned, you know," Jordan said. Later, she said, she'd learn that the Idabel artist dated her brother.

Eventually, discussion fell upon Stevenson's best friend, Alta Fly, whom he met at an art camp when they were teens. Jordan later tracked her down in Arizona, and what she provided was stunning: letters Harold wrote to her over the decades, detailing all his adventures in the world of art and society from the late 1940s to 2012. There were photos and exhibition catalogs in there.

"It was Harold's diary, essentially. They had stayed friends all of these years," Jordan said.

Her research dug up other stacks of letters Stevenson sent to his friends - "tied up in fragile ribbons or in a box or in a big envelope." She estimates she now has 600 Stevenson letters, collected from a generation of letter writers, she explained.

"He was a very good writer, and he was a good talker," Jordan said. She thinks that helped bring him fame. On the flip side, she believes, he wouldn't play the art world game, which meant he also found obscurity.

After that initial interview where such intriguing people were name-dropped, of course, Jordan's interest was mightily piqued, even though the project didn't become her doctoral thesis. "I spent the next seven years talking to him and visiting him," Jordan said.

Her research also led her to his paintings that others owned - "hanging on living room walls in obscurity," she said, adding, "That's what gave me the idea to do the exhibit." Most of Stevenson's art is in private collections.

"Part of it is, a lot of people locally know who Harold is. He's the local artist, and he's always been very popular here," Jordan said, noting she learned by perusing his high school yearbook that he was president of the high school art club, president of the National Honor Society and vice-president of his class. "He was voted Outstanding Senior Boy for the Idabel Chamber of Commerce of 1949."

Harold was popular, even though everybody knew he was different than other folks.

"They just accepted it because they loved him so much," Jordan said. She said he returned to Idabel several times after leaving Oklahoma in 1949.

"I think what this exhibit will do is show the breadth of Harold's work. He's most noted for the human figure and specifically close-up or gigantic body parts, 'The Eye of Lightning Billy,' Sal Mineo's navel," Jordan said.

But he also painted birds, flowers, fruit, landscapes and portraits of both children and elderly people. "He had a wide variety of things that he painted."

She was hoping to find about 30 works, but the reality has surpassed such expectations to reach about 50 art pieces. She's limiting the exhibition to art found in the Four States Area.

"I want people to realize that they have art in their living room that is just as important as what's at the Smithsonian," Jordan said. Art from local artists should be appreciated, she says, and that's what Stevenson was: a local artist. And Stevenson's legacy?

"His real legacy is that he painted what he saw in society," Jordan said. "If there was war, he was painting war. If there was issues with race relations, he painted that."

In a statement about the planned exhibition released earlier this year, the artist's nephew, Kurt Stevenson, said "Uncle Picasso," as he was called, did not enjoy the recognition he deserved in his home state. "Most people don't realize who he is," Jordan said.

Now, with this upcoming exhibit and help from anyone in the region who'd like to loan his art, Stevenson may just get more recognition.

(Potential art lenders are encouraged to contact Museum of the Red River at 580-286-3616, contact Dr. Dian Jordan at 940-600-2713 or [email protected] More info: MusemOfTheRedRiver.org or HaroldStevenson.com.)

Print Headline: Search is on for famous Idabel painter's work