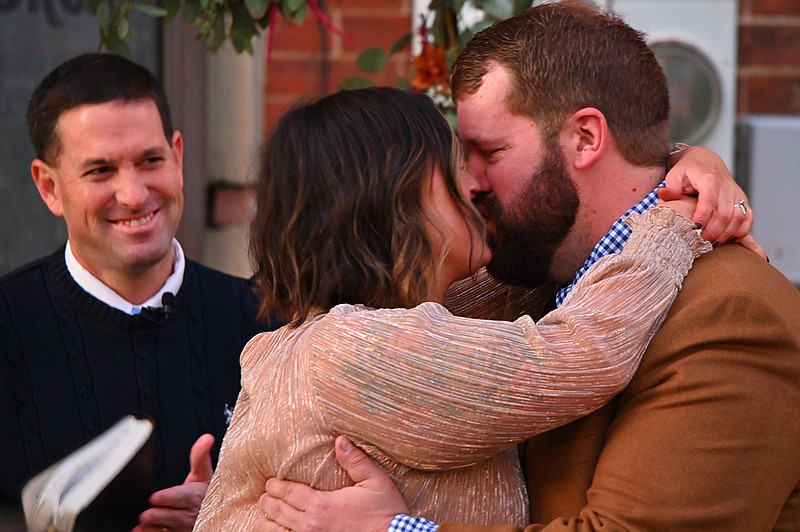 Samantha Whitlow kisses her husband, Jonathan Stokes, Friday after they were announced husband and wife at their wedding ceremony at Kress Gap in downtown Texarkana, Texas.

TEXARKANA, Texas - Where collapse and decay once prevailed, love and beauty triumphed Friday.

At an address once known as the home of a derelict former department store, a largely impromptu wedding and reception proved just how far the downtown spot has come in only a couple of years.

Samantha Whitlow and Jonathan P. Stokes were married at what has become known as the Kress Gap, the lot and mural attraction at 116 W. Broad St. that until recently was a dangerous pile of rubble.

"We've always supported downtown," Stokes said before the Friday afternoon ceremony, as Whitlow had her hair and makeup done at the nearby Beauty Bar salon, where she works.

He and others were busy setting up tables, benches and portable heaters. Most of them had been built or loaned by the couple's family and other supporters, said Candi Campell, a friend of the bride.

About 150 guests were expected.

The location was Whitlow's idea, Stokes said, but he and she both like the spot and wanted to show appreciation for the city's improvements there.

"Hopefully, this might inspire more people to have events down here," he said.

A long-abandoned S.H. Kress and Co. store, once noted for its art deco architecture, lay in a heap at the spot - only the facade left standing - until the city decided to demolish it rather than attempting a much more expensive restoration. At a cost of more than $629,000, a Joplin, Missouri, company in 2017 cleared the lot and stabilized the adjoining walls.

Paving followed, and the lot is now used for some city employee parking.

In 2018, the Texarkana Arts and Historic District commissioned a series of "mini-murals" to decorate one of the walls, and the brightly colored paintings since they have become a popular destination for downtown photographers.

On Friday, Whitlow, Stokes and their friends and family celebrated not only the couple's new life together, but also new life in the heart of Texarkana.