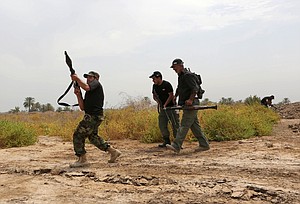 TEXARKANA, Texas - Liberty-Eylau football players who were involved in the fight during the Oct. 5 non-district homecoming game with La Vega are suspended from playing next Friday against Spring Hill.

District officials said the students directly involved in the altercation following L-E's sole touchdown by Damian Henderson in the third quarter could have been suspended for only two quarters of the next game per UIL rules, but they wanted to do more for the players to understand the seriousness of their actions.

"The punishment goes beyond what UIL suggests," L-E Athletic Director Klint King said. "However, our message to our players is that building character is more important than wins and losses."

Players who entered the field from the sidelines during the 49-6 game will be suspended for half of the next game. Those who did not participate, those who were de-escalating the situation and those who left the field will not be reprimanded and will be eligible to play the next game.

District Spokesman Matt Fry said King and administrators are reviewing a video of the game to determine which of the players will be suspended from play.

"We as administration looked at the video and determined that we are going to do a little bit more than what UIL requires," he said. "That's the type of program we're trying to build here. We don't know exactly how many are involved. We are still looking at the video, bringing in students and talking to them."

Fry added that L-E administrators had been in close communication with La Vega's admin and that their reprimands were similar and that the game was a double-forfeit.

This is King's first year as L-E's Athletic Director, as he replaced long-time coach Steve Wells this fall. Fry said the AD has been working with the players to create character growth both on and off the field.

"He has been working on character initiatives," he said. "While working with the kids it's been a culture change and it's been palpable."

Fry said Klint would continue that focus throughout the season.

"Hopefully this gives the kids some clarity on why the coaches push as much as they do," he said. "Changing a culture and the entire athletic program takes some time but it will get there."

The next game will be played Oct. 18 at Spring Hill. Members of the junior varsity and freshman teams will move up to play during the varsity game.