What it is like to trek 800 miles on Arizona Trail 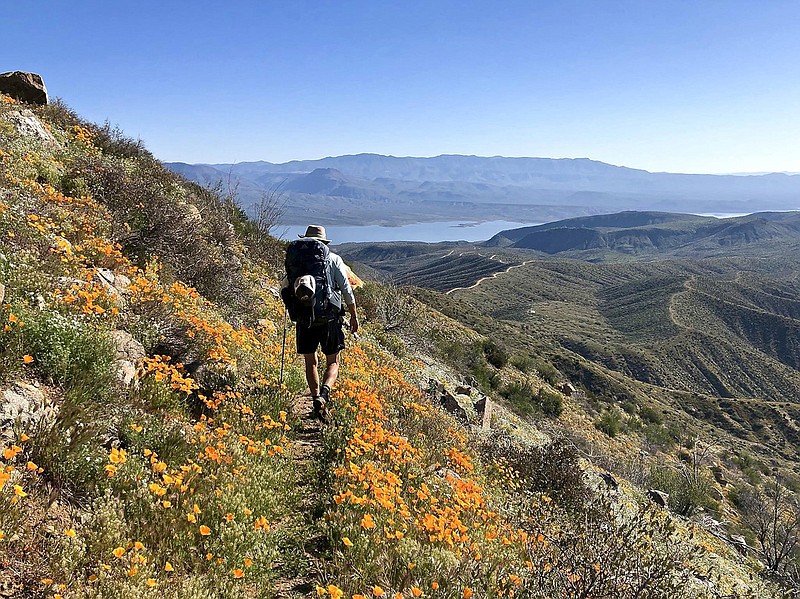 A backpacker traverses the Arizona Trail's Four Peaks passage, brightened by a profusion of spring wildflowers. Roosevelt Lake, pictured in the distance, is a popular resupply spot.

SAGUARO NATIONAL PARK, Ariz. - Fat drops of rain tap out a mournful melody on the nylon ceiling stretched over my head. Peeking out from under a thick down quilt, I watch tiny rivulets of water drip down the sides of my tent and sigh.

It's not supposed to be raining here, at the entrance to Arizona's Saguaro National Park. Not in March. Not here in the Sonoran Desert. But rain is the least of my problems.

I'm just a week into a 45-day trek along the Arizona National Scenic Trail, or AZT, which unravels northbound from the state's Mexican border to Utah. Here, in its southernmost passages, the path stumbles up and over Mica Mountain. The problem is that Mica's summit hovers around 8,600 feet. If this storm weeps over the mountain all night and much of tomorrow, as forecast, Mica will be socked with 2 or 3 feet of snow - not something I want to hike through.

Flopping back onto my stomach, I pull the quilt over my head and pray the storm drifts far away. And soon.

The AZT is one of 11 National Scenic Trails in the U.S., an elite group that includes the Appalachian and Pacific Crest pathways. While on the shorter side at 800 miles, the AZT is billed as one tough trek. You traverse the Grand Canyon and climb up and down a slew of mountains along the way.

And then there's the issue of water. It's scarce. And while thru-hikers like me - those trying to hike the entire trail in one attempt - can avoid summer's oven-like temperatures by hiking in the spring or fall, there are no guarantees on this path. The trail unspools through diverse landscapes of desert, mountain, canyon and forest. You may be hot one day, then freezing the next. Kicking up endless swirls of dust in the south, then slogging through miles of knee-deep mud or snow in the north.

Its intimidating reputation isn't scaring away hikers. Far from it. Like other National Scenic Trails, the AZT has seen tremendous growth in traffic over the last five years. From 1998 to 2014, the Arizona Trail Association recorded an average of five trail completions per year. Now, there are more than 100.

For me, the attraction of an AZT thru-hike is the chance to immerse myself in nature. And to push myself. With this night's deluge, the AZT has just given me a big shove.

The steady staccato of raindrops wakes me in the morning. A quick call to the Saguaro National Park rangers results in the grim recommendation to decamp, stat. And stay off Mica for about a week, unless I want to posthole through knee-deep snow. I don't have a week to burn, so the next two days I hike around Mica's base and that of neighboring Mount Lemmon, whose peak is also snowbound. A fellow hiker tells me some people got caught in the storm at the top of Mica and were evacuated, confirming I'd made a wise decision.

From Mica and Mount Lemmon, I tromp around the town of Oracle, then head for the Black Hills and Tortilla Mountains. The trail devolves from a relatively smooth pathway into a rocky, inhospitable mess. Stumble, fall, curse, repeat. Thankfully, I'm distracted from my misery by the immense fields of colorful spring wildflowers that pop up trailside: Mexican Gold Poppies, bobbing their brightly hued heads; delicate, feathery lupine, which soothe with their pink and lavender tones; bright-red chuparosa, whose flowers taste like cucumbers, and so many more.

Three weeks in, and I've got the hang of things. I'm adept at filtering water, setting up my tent and checking my shoes for scorpions. I haven't tired of eating Pop-Tarts for breakfast, and I've learned to clean up at night with a tiny bar of soap and a few capfuls of water. When a fat rattlesnake blocks my passage, flicking its forked tongue, I only freak out a little before taking a rocky detour.

As I make my way toward the towns of Kearny and Superior, then Payson and Pine, I enjoy occasional meetings with my fellow "hiker trash," as we long-distance trekkers jokingly refer to ourselves. Cashmere, Cookie and Tic Toc tell me to ditch my heavy Nalgene water bottles in favor of lightweight Smartwater disposables, which also fit my screw-on water filter. CowStep and I trade snacks, my candy bar for a scoop of his chocolate chip-laced peanut butter. Golden and I curse about the several-day stretch of trail comprised almost entirely of baseball-sized rocks, which battered our feet and our psyches. And I fret over Long-Hauler, who fears his persistent leg pain is because of a torn tendon.

By the time I reach Flagstaff, I've got 500 miles under my pack straps and dozens of video clips in my head, which contain all of the breathtaking vistas the trail has shown me. While I'm eager to see what lies ahead, I know serious challenges remain. From here, the trail ascends Humphreys Peak, whose 12,633-foot summit is Arizona's highest point. The AZT climbs only 9,000 feet up Humphreys' flank, but there's a lot of soft, deep snow up there. After that, I'll face trekking in and out of the mighty Grand Canyon, then navigating its North Rim - which, like so many other spots this year, is buried under several feet of snow. Can I do it?

My final exam is tough. I repeatedly sink up to my knees in the soft snow on Humphreys Peak, causing tears of frustration. Once off the mountain, strong winds pummel me for two days. I battle several short-lived, but unnerving, blizzards. Pick my way across some treacherous rock slides climbing out of the Grand Canyon. I'm forced to pitch my tent on the porch of the North Rim park ranger's cabin when the voluminous snow cover makes it impossible to camp elsewhere.

On Day 45, I arrive at the trail's northern terminus. Long-Hauler and a few other friends are there, and we all dig into a feast of hot dogs, chips and beer, courtesy of a handful of other hiker trash eager to provide "trail magic" for their kindred spirits. Then it's time for reflection.

I'd set out on this journey to enjoy nature while pushing myself a little. Now I can attest that while Mother Nature is awfully beautiful, she's one tough cookie. And so am I.