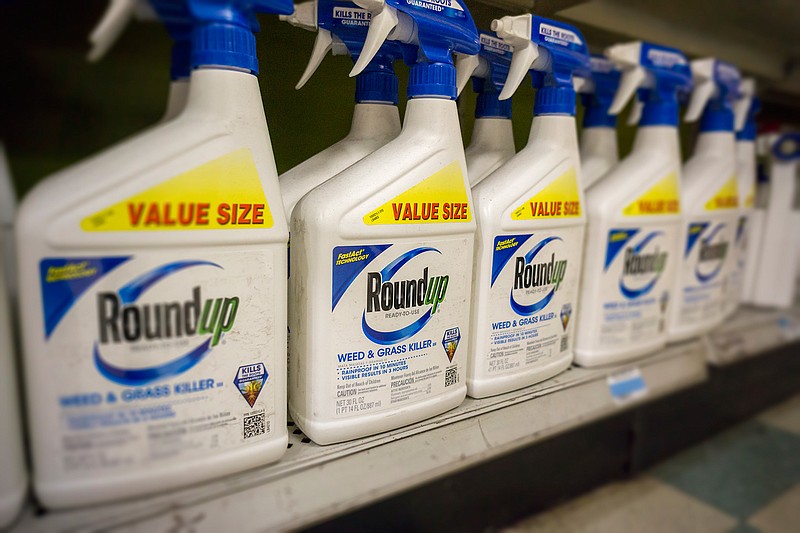 Containers of Monsanto Roundup weed killer on a garden supply store shelf in New York on May 23, 2016.

TEXARKANA, Ark. - A lawsuit filed earlier this month in a Texarkana federal court seeks damages on behalf of Arkansas and California consumers who bought Roundup weed killer products from Lowe's stores in those states.

The suit against Lowe's is similar to one Harrelson filed in August against Walmart. That suit seeks damages on behalf of Arkansas residents who purchased a Roundup product from an Arkansas Walmart.

Neither Lowe's nor Walmart responded to requests for comment.

Roundup contains the herbicide glyphosate, which has been linked to disease in humans and animals. The suits filed in Texarkana alleges Roundup products contain inadequate warnings and that Walmart and Lowe's didn't do enough to protect customers.

"Roundup's labeling provides certain warnings, such as, 'Keep Out of Reach of Children' and 'Caution.' But the only identified hazard is that it may cause 'moderate eye irritation,'" the complaints state. "This warning gives the false impression eye irritation is the only risk posed by Roundup, when in fact, glyphosate is known to have links to cancer."

Walmart and Lowe's, as retailers of Roundup, are provided with a "Safety Data Sheet" by the manufacturer, which details the product's risks, according to the complaints. The SDS warns of inhalation and skin contact.

"Defendant further omits proper use instructions, e.g. advising consumers to use a gas mask respirator when using Roundup," the complaints state. "Reasonable consumers, like plaintiff, who have purchased Roundup, would not have done so had they known of its carcinogenic risks or had defendant provided a warning on how to minimize these risks."

The complaints chronicle a number of studies that raise concern about the health risks glyphosate exposure may pose. Also mentioned are other lawsuits against Roundup manufacturers, which have resulted in multi-million judgments for plaintiffs. The complaint notes as well restrictions and bans on glyphosate in multiple countries.

The complaints specifically refer to multi-million judgments awarded consumers against Roundup manufacturer Monsanto in 2018 and 2019.

Both cases are currently pending before U.S. District Judge Susan Hickey. Neither Lowe's nor Walmart has responded to the complaints.