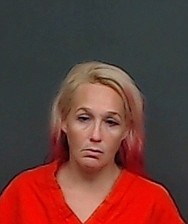 TEXARKANA, Texas - A Texas appellate court has upheld the murder conviction and 25-year sentence of woman found guilty in January in the 2018 shooting of a man she once dated.

Tonya Ruth Barnett, 43, was convicted by a Bowie County jury of murder in the May 24, 2018, death of 35-year-old Cedric Ellis. The 6th District Court of Appeals in Texarkana affirmed Barnett's conviction and sentence in an opinion issued Tuesday.

At trial, Barnett claimed she acted in self-defense during a struggle with Ellis over her cell phone. Assistant District Attorney Katie Carter argued during the trial that Barnett's portrayal of herself as a "damsel in distress" was in conflict with the physical evidence.

No evidence pointed to a struggle and a medical examiner testified that Ellis was shot in the back of the head from a distance of more than three feet.

Carter argued that Barnett was upset because Ellis was dating other women and because he planned to attend a family gathering with the mother of his child.

On appeal, Barnett argued that her lawyer was ineffective. Specifically Barnett complains that her trial lawyer didn't thoroughly advise her of the consequences of giving the jury only one option - murder - when they deliberated on her guilt or innocence.

Barnett argued that her lawyer should have given her better advice about giving the jury two options: murder and manslaughter. Manslaughter is a lesser offense than murder and carries a lower punishment range.

The higher court rejected Barnett's argument. The opinion notes that Barnett was questioned under oath outside the presence of the jury regarding the decision to proceed with an "all or nothing" approach.

The opinion found that such an approach is a valid trial strategy and noted additionally that Barnett did not show she was entitled to a jury instruction on manslaughter.

Barnett is currently being held in a Gatesville, Texas, unit of the Texas Department of Criminal Justice. TDCJ's website shows Barnett will become eligible for parole July 9, 2032. Eligibility for parole is not a guarantee parole will be granted.