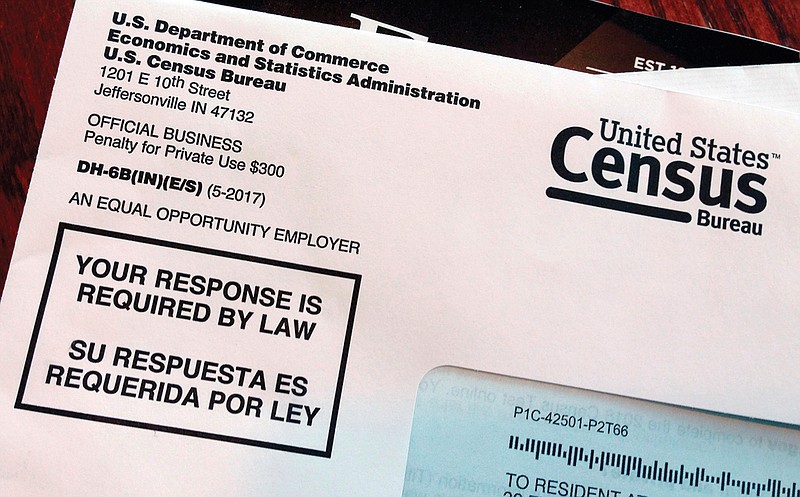 This March 23, 2018, file photo shows an envelope containing a 2018 census letter mailed to a U.S. resident as part of the nation's only test run of the 2020 Census. (AP Photo/Michelle R. Smith, File)

With the national census response rate at only about 62%, the U.S. Census Bureau has announced a series of follow-up activities to boost participation over the next several months.

The Bureau has begun making follow-up calls to some households that have already completed the 2020 Census. The goals are to make sure everyone in a household was counted and to validate information provided when they completed the census questionnaire.

Census call center agents began making calls on April 22. If the household does not answer a call, agents will leave a voice mail with a 12-digit ID as a reference number. This effort is set to continue through the end of the response phase on Oct. 31.

All census takers will be trained on social distancing protocols. They will be issued personal protective equipment and follow local guidelines for their use.

In some cases, a second census taker may visit a household to conduct a short interview to ensure the quality of data collection activities. These re-interviews are meant to confirm every census taker followed our training and did their jobs correctly. The re-interview will be conducted by a different census taker than the one who originally visited the household. The Nonresponse Followup Re-interview operation is scheduled to run from August 12 to October 31.

After a household has already completed the 2020 Census, census takers will visit a select number of households as part of the Post-Enumeration Survey. The Census Bureau conducts this survey to measure the coverage of housing units and people residing in housing units in the 2020 Census. To that end, census takers will gather the following information: current residents of the housing unit; people living in the household who may or may not have been there April 1, Census Day; and people who moved out of the household between April 1 and the time of the interview.

The information collected for each person includes name, sex, age, date of birth, race, relationship to householder and Hispanic origin. The interviewer also collects information about alternate addresses to establish where people lived on Census Day, according to census residence rules. Post-Enumeration Survey interviews are set to take place Sept. 23 to Dec. 22.

The Census Bureau urges the small percentage of households that are contacted during the Nonresponse Followup Re-interview and Post-Enumeration Survey operations to take a few minutes with the census taker to help ensure the quality of the 2020 Census.

All census takers have official ID badges that include their name, photograph, a U.S. Department of Commerce watermark and an expiration date.

The U.S. Constitution mandates a census of the population every 10 years. Census statistics help determine the number of seats each state holds in the U.S. House of Representatives and how billions of dollars in federal funds will be allocated to states and communities for the next 10 years.