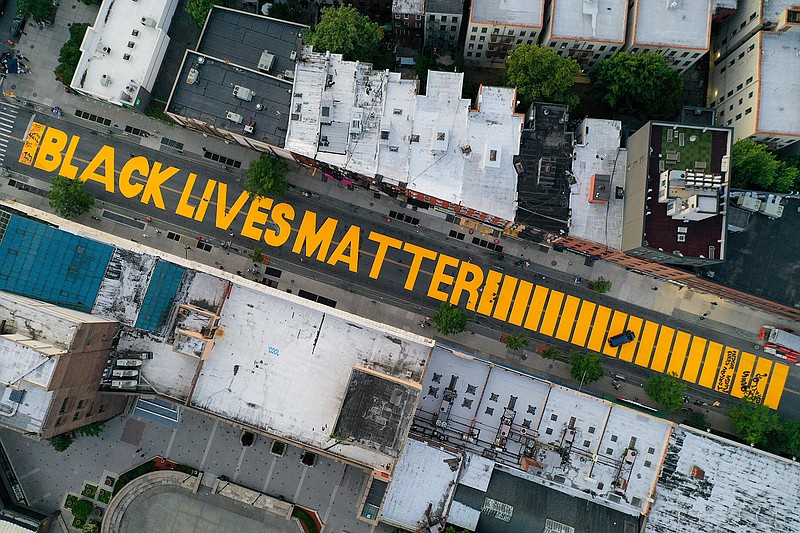 In this June 15, 2020, file photo, a giant "BLACK LIVES MATTER" sign is painted in orange on Fulton Street, Monday, June 15, 2020, in the Brooklyn borough of New York. Black Lives Matter Global Network Foundation, the group behind the emergence of the Black Lives Matter movement, has established a more than $12 million fund to aid organizations fighting institutional racism in the wake of the George Floyd protests. (AP Photo/John Minchillo, File)

At the onset of the pandemic, travel content creators found themselves wrestling with the same question: What do you write about, photograph and share online when you can't actually travel? A small group of black creatives formed a mastermind group to brainstorm answers. They hosted calls each Friday, where they would share thoughts on the future of an industry still reeling from international and local shutdown.

But then in late May, the videos of the police killing of George Floyd in Minneapolis immediately changed the tenor of their conversations.

"It just brought to light not only police brutality but also how so far behind we are in other areas," says Martina Jones Johnson, the globe-trotting content creator behind the Instagram account, ThatCoupleWhoTravels, which she runs with her husband.

Johnson says the group quickly shifted their attention to addressing the shortcomings in the travel industry, a sector of the U.S. economy that has long excluded black people in everything from executive leadership positions down to representation in advertising campaigns.

"We wanted to figure out how we could change this narrative - how could we make the travel industry that we love better?" says Johnson, who recently joined more than a dozen creatives in founding the Black Travel Alliance (BTA). The alliance announced its first campaign last week on social media with the hashtag #PullUpForTravel, inspired by beauty executive Sharon Chuter's #PullUpOrShutUp campaign to call out brands and hold them accountable.

Over the past few weeks, as protesters took to the streets of more than 2,000 U.S. communities, major travel brands have rushed to express support for the Black Lives Matter movement - though their declarations rarely include actionable specifics. Even when travel brands announce philanthropic donations or initiatives such as leadership training programs, they repeatedly leave out details such as dollar figures and internal employment statistics.

#BlackLivesMatter proclamations from brands have followed a familiar script, with social media users calling out the ambiguity. Take Hilton, which announced on Facebook that they are "listening and learning." They pledged to hit an undisclosed leadership diversity target and "further support" the NAACP and National Urban League, without saying how much money they would donate.

On Instagram, Delta Air Lines stated they are a "values-led brand," so TheBlackTravelAlliance and several other commenters asked to see "support beyond social media." And boutique hotel chain the Hoxton, one of many brands that posted a black square to its Instagram grid for #BlackoutTuesday, said "silence is not an option," while keeping mum about the amount or timing of the donations they promised to make. In a statement to The Washington Post, the company said they will not disclose donations and are "in the process of selecting a black owned diversity and inclusion partner."

Hilton and Delta Air Lines had not responded to The Post for comment at the time of publication.

Without a clear outline of what companies plan to do, such statements can read as little more than "slacktivism," or low-effort and noncommittal online support. Black travel professionals say what we need now is brands practicing what they preach.

"It is not about marketing slogans or campaigns in my view, but about the proactive actions each of us personally take and hold ourselves accountable for," Carnival chief executive Arnold Donald, one of the few black executives in the industry, wrote in an email. "There is an opportunity here for all of us to do more - and do much better - looking closely at our diversity and inclusion results across the board and challenging ourselves as individuals to take actions that can make a difference."

American Airlines, for example, declared on social media that they "stand in solidarity against racism." Only three years before, however, the NAACP issued a travel alert "warning African American travelers about their safety" when flying with the airline because of "a pattern of disturbing incidents." NAACP lifted the advisory in 2018, citing progress toward diversity and inclusion, though this week five passengers sued the airline, alleging racial discrimination. Commenters on Instagram have also noted that the executive team remains entirely white.

Similarly, the chief executive of Enterprise Rent-A-Car recently issued a statement decrying "the racial injustices affecting our communities," though there was no mention of how last year a federal judge ordered the company's Baltimore subsidiary to pay $6.6 million to the 2,300 black applicants turned down because of their race.

And while the chief executive of Spirit Airlines encouraged the company's Twitter followers to "say no to racism," on person recalled how Spirit had disciplined a flight attendant in 2016 after a white man complained she was wearing a button that said "Black Lives Matter. White Supremacy Kills."

The focus needs to be on accountability, not memes, BTA members insist. "We want travel brands to put action behind their black squares," Johnson explains, "starting with equal opportunities, representation and pay for Black content creators." So they set a deadline, calling on companies and organizations across the travel industry to release internal data on June 19, aka Juneteenth, which commemorates the end of traditional slavery in the United States.

An ongoing initiative of BTA, the Black Travel Scorecard tracks the data brands submit across five key performance indicators: employment, conferences and tradeshows, marketing campaigns, press trips and philanthropy. BTA did not expect travel brands to debut impressive diversity stats this month; they primarily want to establish transparency as an operating principle, so the public can track progress going forward.

"I thought it was a fair and interesting callout," says Rita McClenny, president and chief executive of the Virginia Tourism Corporation, the first state-level destination organization to respond to the scorecard. McClenny appreciates how BTA was challenging destination marketers to recognize that inclusivity is a part of their job. "Everybody wants the same thing, the same treatment - I don't know if everyone gets that," she says.

BTA cites Virginia Tourism as one of the best examples they have seen, with not only a black executive at the helm but also black leaders making up 35 percent of the board of directors, 50 percent black representation in print and banner ads, and nearly 50 percent in paid social ads, among other stats.

Only a few of the biggest names in travel are among the roughly 60 companies that have submitted data to BTA so far, with silence from the likes of the InterContinental Hotels Group, Airbnb and Southwest Airlines (the latter two each announced $500,000 in donations to organizations including the NAACP, National Urban League, 100 Black Men of America and the Black Lives Matter Foundation).

In the few cases where major brands have replied, they have been less forthcoming in sharing data. Marriot Bonvoy and Condé Nast Traveler, for example, provided a summary of their brand's commitments instead of hard numbers. Smaller companies such as luggage brand Béis and travel website the Points Guy have come through with more complete data sets.

When it comes to destination marketing organizations, more have remained silent than have spoken up. "Some destinations are going to have to force themselves to evolve," wrote Regena Bearden, chief marketing officer at Memphis Tourism, in an email. Memphis reports black managers making up 42 percent of its leadership team, and 50 percent of its influencer campaigns feature black content creators.

Like Virginia Tourism - and other BTA respondents including Visit Jackson and Cincinnati USA - Memphis works to avoid tokenization by embracing the richness of the destination's black communities and building relationships with a wide range of black creatives. "When your organization is intentional and conscious of the need to speak to black travelers, it becomes part of your DNA and drives your decisions in outreach and creative campaigns," Bearden said.

After all, failing to act makes brands complicit, Johnson of BTA says. "Moreover, it's bad for business," she adds, noting that black Americans alone spend more than $63 billion a year on travel, based on a 2018 report from Mandala Research.

"The companies and destinations that get diversity right, especially in the area of black representation, will be the first to recover from the impact of covid," Johnson predicts. "Equality and fair representation will be a driving point for where we black people, along with our allies, spend our money."