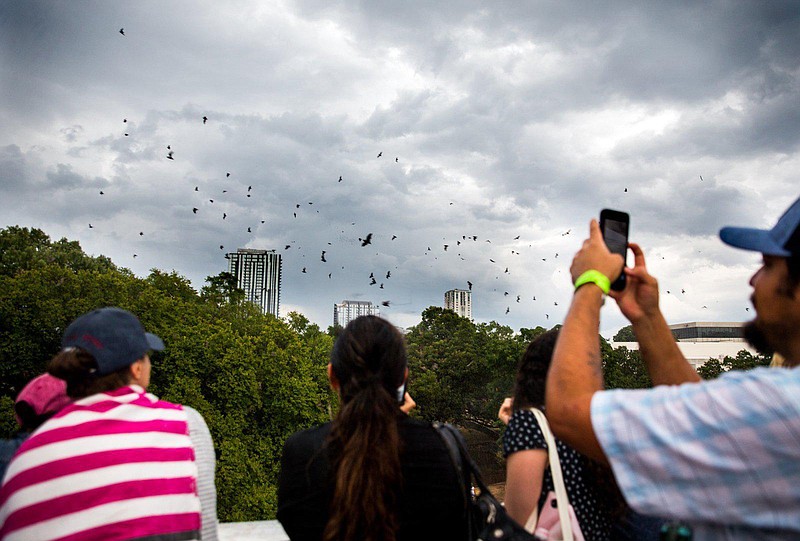 People watch bats fly out from under the South Congress bridge at the 15th annual Bat Fest in Austin, Texas, on August 24, 2019. (Eli Imadali/Austin American-Statesman/TNS)

AUSTIN, Texas - As the sun sets over Lady Bird lake on a warm summer night, a stream of shadows begins to emerge from beneath the Ann Richards Congress Avenue Bridge. The shadows dart and dance across the orange sky like insects silhouetted by a flame.

Tiffany Toronto, visiting family from her home in Maine, watched the display with her children Tuesday. "It's really a cool thing to watch them all fly out. You look at it and you think, 'Where are they?' And then they fly out all at once."

This scene plays out nightly during the summer in Austin. Millions of bats depart their daytime roosts within the structure of the bridge to consume nearly their body weight in insects every night. The bats, a tourist attraction and icon for the city, appear in public sculptures, on basketball jerseys and all over Austin souvenirs. Austin's bats even have their own festival that has drawn massive crowds in previous years.

But with recent media coverage pointing to bats as a possible origin of the new coronavirus, have attitudes changed towards the bats in Austin?

"These media stories are bound to do some harm," said Merlin Tuttle, a veteran bat biologist and the eponymous founder of Merlin Tuttle's Bat Conservation. But Tuttle has quieted public fears before.

When he first arrived in Austin in 1986, fear of contracting rabies from bats was spreading across the country. "Health officials told Austinites that the bats were rabid and dangerous," Tuttle said. "People signed petitions to have the bats are eradicated."

Like the rabies virus in years past, the suggested link between the new coronavirus and bats has put the animals at risk for "demonization, eviction, and slaughtering," Tuttle said in a recent Op-Ed in a science journal. But the link between bats and the virus may be more tenuous than what has been suggested.

"The closest related coronavirus is found in horseshoe bats, and that virus, as they pointed out in the media, was 96% genetically similar to the SARS-CoV-2, that's causing COVID-19," Tuttle said. "But we are 98% genetically identical to chimpanzees, and I don't know if anybody has trouble telling us from chimpanzees."

Tuttle and other bat conservationists worked tirelessly to overcome the rabies scare and educate the Austin public about the many benefits and the largely overstated concerns surrounding these nocturnal visitors.

Now referred to as Brazilian free-tailed bats, after scientists discovered that Mexican free tailed bats were not a separate species, the nocturnal mammals make their summertime home in Central Texas before migrating to Mexico in the winter.

"In the well over 100-year history of Austin, no one has ever contracted rabies from a bat," Tuttle remarked. And "just one of our Brazilian free-tailed bats can eat enough corn worm moths in a single night to prevent them from laying 20,000 or more eggs on crops; that's enough to force a Texas farmer to spray multiple acres of cropland with pesticide."

Austinites came to love the Brazilian free-tail bats, and their nightly emergence became a must-see attraction for visiting family and friends. From then on, not only were the bats saving Texas farmers an estimated "$6.4 billion in crop protection," according to an estimate from Bat Conservation International, but they also brought Austin an additional "$10 million in tourism revenue each year."

Today, because of travel restrictions from the coronavirus pandemic, tourism revenue is taking a hit.

Capital Cruises on Lady Bird Lake closed from mid-March to mid-May. After reopening, the operator cut its sales of nightly bat tours by 75% to maintain safe distancing between passengers, Manager Tony Borne said. "The loss will be hard to make up."

Live, Love, Paddle owners Beverly and Casey Vick also felt the pain of decreased tourism. "It's been brutal for us," Casey Vick said. "The majority of the people who come on bat watching kayak tours are tourists, or they are visiting someone from Austin. It's been a much more direct hit on our tours."

Both companies agreed that it wasn't a lack of interest in the bats that was hurting their businesses, but a lack of tourists.

Tourists gathering near the bridge to watch the bats also provided the perfect opportunity for education and outreach by conservation groups. While Austinites know more-than-most about the Brazilian free-tailed bats with whom they share a city, visitors often come with very little knowledge, and occasionally some trepidation.

The Austin Bat Refuge, a bat rehabilitation facility, understood the importance of these moments and took the opportunity to educate crowds at the Congress Avenue bridge from a table they set up every weekend.

"Education is a big part of our mission," said Dianne Odegard, who co-founded the refuge with Lee Mackenzie. "We weren't just preaching to the choir. The people we spoke to didn't know a lot about bats."

Fewer tourists also mean fewer educational opportunities. And while media coverage has continued to place bats at the center of the ongoing pandemic, education may be the only way to combat growing fear and misinformation globally.

"We're learning to do some virtual education sessions on zoom and other platforms," said Odegard, who has been rehabilitating bats since 1990. "We really value our connection with people."

The few tourists who gathered at the bridge Tuesday expressed delighted awe at the bats emerging that evening.

"It's awesome," said Miro Hernandez, who was visiting from Fort Worth. "And the fact that it happens every day is pretty cool."

Asked if whether or not the coronavirus has changed his opinion of the bats, William Winberg from Cedar City, Utah, said, "Not really, no. I think they're cute."