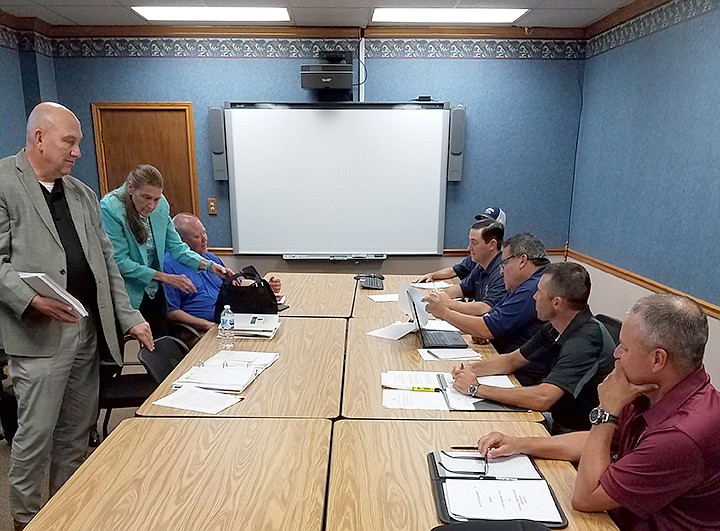 TEXARKANA, Texas - In contract talks Wednesday, city negotiators said any wage increases for firefighters would hinge on the local union's acceptance of a hiring advantage for applicants from underrepresented demographics.

Union representatives rejected the city's proposal, which would give a 10-point bonus on the Texarkana, Texas, Fire Department entrance exam to minority applicants who score 70 or above. The union is all for more diversity in TTFD, but the real hindrance to more minority recruitment is low pay, and the measure likely would result in the city being sued, they said.

"Now is the time to show the city is committed to increasing diversity," she said. "Everyone believes this is important to the future of the community."

Direct action is warranted in TTFD because it is the least diverse city department, with 96% male and 99% white employees, said J.W. Bramlett, city human resources specialist. The sole ethnic or racial minority in the Department is a Hispanic man, he said.

"We don't see the same issue within other departments," he said.

The parties discussed other possible means outside a new contract to improve recruiting, including programs that would introduce local high school students to the fire service. All agreed that such initiatives are a good idea.

But the union insisted that as long as wages remain noncompetitive with those paid by other nearby fire departments, recruiting anyone will be difficult, and the best remedy for the diversity problem would be compensation that attracts more applicants.

"This is a crazy deal," said Scott Robertson, president of the union, International Association of Fire Fighters Local 367. "If you're not getting people to come take the test, this is not going to work. The wages are the problem."

For the union to even consider accepting the diversity clause, the city would have to agree to its pay-raise plan, he said.

More importantly, the measure would leave the city vulnerable to accusations of discriminatory hiring and potential lawsuits, Robertson said. Lynn countered that the city's intention was just the opposite, to forestall involvement of state or federal authorities, for example by means of a U.S. Department of Justice takeover of the Department.

"We recognize we have a problem and we have to solve it ourselves before it gets shoved down our throat," she said.

Negotiations have entered their third year without resulting in a new employment contract. The city introduced the diversity clause proposal for the first time last week, as the union offered a proposal stripped down to a single provision, a pay plan that would incrementally raise wages to market average over three years.

The latest round of negotiations followed the success of a ballot initiative petition circulated by the union, which will give voters some say in the matter. Because firefighters gathered enough signatures, in November's general election Texas-side voters will decide whether to amend the city charter to allow the union to force binding arbitration.

In November 2016, Texas-side voters elected to allow the Fire Department to engage in collective bargaining. Firefighters later chose the union as their representative in employment talks.

In 2018 and 2019, multiple meetings and an attempt at third-party mediation did not result in a contract. Union members voted against accepting a contract proposed by the city, rejecting it as unresponsive to firefighters' concerns. The city rejected the union's request to resolve disagreements through binding arbitration.

Negotiations will continue in open meetings, live streamed on the city's website, at 1:30 p.m. Wednesday and 9 a.m. Thursday.