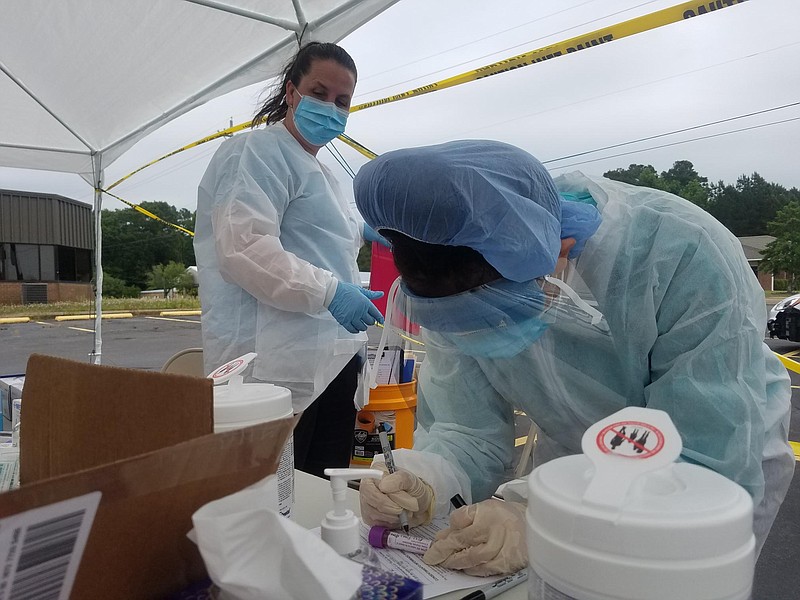 Staff from Healthy Connections, Inc. work at a one-day, pop-up, COVID-19 testing event held May 21, 2020, at the old De Queen Medical Center parking lot in De Queen, Ark. Wearing personal protective equipment, five employees collected tests from 10 a.m. to 2 p.m. at no cost to people tested. People could drive up and be tested, no matter their symptoms. The Mena, Arkansas-based community health center will hold another testing event in De Queen on June 11 and then again the next day, June 12, in Nashville, Ark.

SEVIER COUNTY, Ark. - Recent upswings in the county's number of confirmed coronavirus cases can be attributed to increased testing, as well as residents' complacency about safety guidelines such as wearing protective face masks, according to a local official.

County Health Officer Dr. Jason Lofton said Friday that he expects more testing, including a free drive-up drive conducted last weekend, to cause the county's case count to jump, and he encouraged residents to wear masks and practice social distancing.

"When I go out, I don't see very many people wearing masks, and people getting back together, and that's about the time we started seeing a lot of this happen," he said.

The county recorded less than 20 cases by May 15, but by Monday the tally was 225, according to the Arkansas Department of Health. The count was 162 on Friday.

"To me, it's been expected. It's just the wave is just now hitting here," Lofton said.

Most positive cases he has seen are among patients who show no symptoms of COVID-19, the disease caused by the virus. He cited thorough contact tracing, followed by testing of those exposed to infected patients, as another explanation for the rise in the county's confirmed cases.

"Wherever the largest number of people are, that's where you're going to see the most cases," he said.

Tyson Foods announced Monday that it will conduct facility-wide testing at its plants in Benton and Washington counties in Northwest Arkansas, the region of the state currently hardest hit by the pandemic. The company did not announce testing plans for its facilities in Sevier County or elsewhere in the state.

As of Monday, Tyson was aware of 77 active COVID-19 cases among its nearly 24,500 employees in Arkansas. Infected employees "are still absent from work under the guidelines by the CDC and Tyson to stay home," according to a news release.

Pilgrim's Pride has not mounted an effort to test employees of its plant in the county, though the company says it is "helping to facilitate testing in more of our locations as testing becomes available to state and local authorities."

On Monday, Smith said 571 poultry industry workers statewide had tested positive, 392 of those cases were active, and 73% of the patients were Latinos, who make up much of the industry's workforce.

Asked Thursday if there were plans to focus a testing effort on the state's food processing plants, including testing on worksites, Smith said it was possible.

"We've really had excellent partnership with all of our worksites where we had clusters, and in some cases it makes sense to come onsite and do testing there. In others, it makes more sense to send them to the local health unit or to their private providers. But certainly we are open to working with worksites, whether they've had a cluster or not, on strategies for testing of the employees," Smith said.

Addressing a recent concentration of positive cases among Latinos statewide, Smith stressed Thursday that the problem goes beyond worksite clusters.

"This is larger than a workplace-associated outbreak. This involves entire communities. Our fastest growing age group is less than 18. Worksites, workplaces can be places where adults do interact with each other and facilitate the spread of COVID-19, but this is in the entire community," he said.

"We're looking at this holistically," Hutchinson said Monday after a meeting with poultry industry executives. Hutchinson said he too was impressed with the industry's new safety protocols.

Lofton said he has been reaching out to Sevier County's Latino population - as well as to Marshallese residents, natives of the Marshall Islands who also make up a significant portion of poultry workers - to encourage them to observe safety guidelines and get tested.

The county's health clinics have plenty of test kits available, and residents without health insurance need not worry about paying to be tested, Lofton said.

"Everybody can get tested who wants to get tested. There's no limits on testing right now," he said.