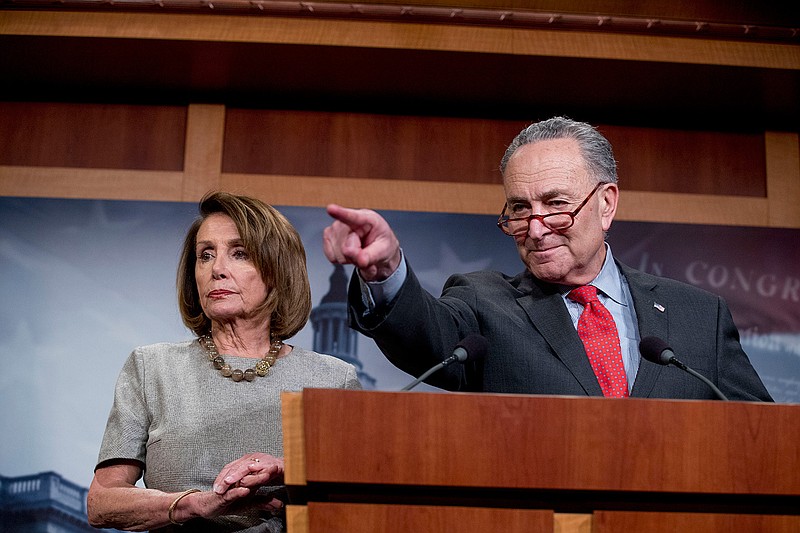 WASHINGTON - hief Justice John Roberts on Wednesday criticized as "inappropriate" and "dangerous" comments that Senate Democratic leader Chuck Schumer made outside the Supreme Court earlier in the day about Justices Neil Gorsuch and Brett Kavanaugh.
Roberts was responding to Schumer's remarks at a rally outside the court while a high-profile abortion case was being argued inside.

"Inside the walls of this court, the Supreme Court is hearing arguments, as you know, for the first major abortion rights cases since Justice Kavanaugh and Justice Gorsuch came to the bench," Schumer said. "We know what's at stake. Over the last three years, women's reproductive rights have come under attack in a way we haven't seen in modern history.

"Republican legislatures are waging a war on women, all women, and they're taking away fundamental rights," Schumer said,  according to video of the rally available online. "I want to tell you Gorsuch, I want to tell you Kavanaugh, you have released the whirlwind and you will pay the price. You won't know what hit you if you go forward with these awful decisions."

In a statement, Schumer spokesman Justin Goodman criticized Roberts, saying that "to follow the right wing's deliberate misinterpretation of what Sen. Schumer said" shows the chief justice "does not just call balls and strikes."

Goodman said Schumer's comments "were a reference to the political price Senate Republicans will pay for putting these justices on the court, and a warning that the justices will unleash a major grassroots movement on the issue of reproductive rights against the decision."
He noted that the chief justice remained quiet in recent weeks when President Donald Trump questioned the impartiality of Justices Ruth Bader Ginsburg and Sonia Sotomayor.

Late last month, Trump had tweeted, "'[Supreme Court Justice Sonia] Sotomayor accuses GOP appointed Justices of being biased in favor of Trump.' @IngrahamAngle. This is a terrible thing to say. Trying to 'shame' some into voting her way? She never criticized Justice Ginsberg when she called me a 'faker'. Both should recuse themselves on all Trump, or Trump related, matters! While 'elections have consequences', I only ask for fairness, especially when it comes to decisions made by the United States Supreme Court!"

Trump himself weighed in on Schumer's comments later Wednesday, tweeting: "If a Republican did this, he or she would be arrested, or impeached. Serious action MUST be taken NOW!"
Roberts, who in 2018 rebuked Trump for the president's criticism of an "Obama judge," had jumped to his colleagues' defense after Schumer's remarks. "Justices know that criticism comes with the territory, but threatening statements of this sort from the highest levels of government are not only inappropriate, they are dangerous," Roberts said in a statement.
The justices are currently weighing a Louisiana law requiring doctors who perform abortions to have admitting privileges at a nearby hospital. A federal judge found that just one of Louisiana's three abortion clinics would remain open if the law is allowed to take effect.
Roberts is expected to be the deciding vote.

Jimmy Williams, a senior adviser to Democrat Tom Steyer's failed presidential campaign, responded to Schumer's remarks by suggesting that the senator may need to step down.

"Threatening a sitting Justice regardless of their politics is dangerous," Williams tweeted. "What Schumer said is gross inappropriate and unacceptable. He should clarify his words immediately or step down from leadership. We must be better than this."

"Tonight U.S. Senator Josh Hawley (R-Mo.) announced he will introduce a motion to censure U.S. Senator Chuck Schumer (D-N.Y.) for inciting violence against U.S. Supreme Court Justices. In a pro-abortion rally in front of the Supreme Court today, Senator Schumer threatened Justices by name saying, "I want to tell you, Gorsuch. I want to tell you, Kavanaugh. You have released the whirlwind, and you will pay the price. You won't know what hit you if you go forward with these awful decisions."

"Now @chuckschumer is threatening Supreme Court Justices personally, to the point of implying their physical safety is endangered. Disgusting, shameful, and frankly, WEAK," Hawley wrote on Twitter. "I would call on Schumer to apologize, but we all know he has no shame. So tomorrow I will introduce a motion to censure Schumer for his pathetic attempt at intimidation of #SupremeCourt."

Democrat Jonathan Turley, constitutional law professor at George Washington University, also criticized Schumer for his remarks. He tweeted, "Schumer's threat to the Court that "you will pay the price" is a direct attack on the integrity of our courts. I criticized Trump for his reckless comments about the courts. Where is the chorus of condemnation of Schumer? Schumer sounded more like a stalker than a statesman."

The House and Senate have regularly asked Turley to testify about constitutional issues, including during the recent impeachment proceedings.