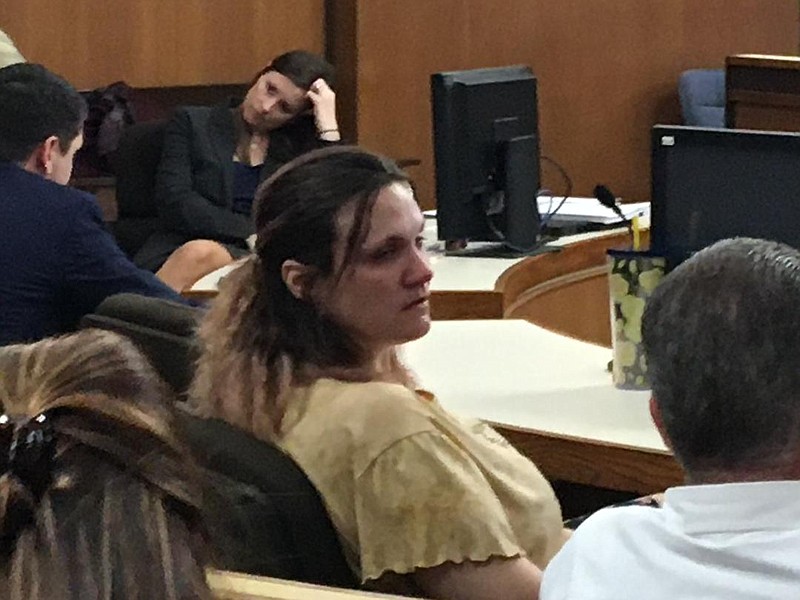 Linda Michelle "Gucci" Dooley, 38, talks to her lawyer on Thursday in court in New Boston, Texas. She was found guilty and sentenced to life in prison for human trafficking involving the prostitution of a 16-year-old girl.

NEW BOSTON, Texas - A woman who turned down a 20-year plea offer was sentenced by a jury to life in prison Thursday for human trafficking involving the prostitution of a 16-year-old girl.

Dooley provided the girl, who'd been reported as a runaway to Bowie County Sheriff's Office, with methamphetamine and a place to stay and kept money paid by strangers to have sex with the teen. Investigators were concerned the girl was at risk for human trafficking and circulated flyers among area law enforcement agencies.

A special agent with the Texas Department of Public Safety showed the victim's photo to a known sex worker in Texarkana who herself was a victim of child sex trafficking. That woman saw the girl at Dooley's residence on Waterman Street in Texarkana, Texas, and told law enforcement where they could find her.

Among the witnesses to take the stand Thursday was a 24-year-old man who testified that he was 10 or 11 when Dooley sexually assaulted him on the living room couch of her apartment in Hooks, Texas. The man said he was at the apartment to visit her children.

The man testified that as the children watched television, Dooley threw a blanket over his lap and her lap and she sexually assaulted him. The man said she warned the children not to tell anyone.

The jury heard testimony regarding Dooley's prior criminal history.

Texarkana, Arkansas, Officer Les Munn testified that he was working a detail meant to identify intoxicated drivers March 31, 2012, when he observed Dooley driving at speeds of 60 and 65 miles per hour in a residential neighborhood. Munn said that when he attempted to stop Dooley, the sole occupant of a small pickup, she fled in the truck. He said he began to back off his pursuit of the truck for fear she would hurt someone in the mostly residential neighborhood.

As he watched, she ran a stop sign and "T-boned" an sport utility vehicle, injuring the family inside, Munn said. He said the truck Dooley was driving "spun out in a daycare parking lot" before she abandoned it and fled on foot. Munn testified the truck had been reported stolen. Dooley served time in an Arkansas prison in connection with the events of that day, he said.

"What kind of behavior do you have to engage in to be at the end of the punishment range? We are there," Crisp argued. "Her conduct is representative of a person who never again needs to see a free day."

In addition to life in prison, the jury also assessed a maximum $10,000 fine. Dooley recently turned down an offer from the state to plead guilty to sexual assault of a child and accept a sentence of 20 years.

Richards thanked the jury for their service and expressed hope that the verdict serves as a deterrent.

"In addition to Linda Dooley's lengthy criminal history, the jury took into consideration the impact on the victim and our community. Our area is not immune to the dangers of human trafficking," Richards said. "We hope the jury's decision to sentence her to the maximum punishment for trafficking a child will serve as a warning to others who engage in the same conduct."

Crisp praised the work of law enforcement and the jury's verdict.

"The jury heard outrageous testimony," Crisp said. "Linda Dooley created an advertisement, online, for the sexual services of a minor child, and Dooley had previously abused a child of 10. The jury quickly found Dooley guilty and assigned a life sentence in the Texas Department of Criminal Justice. The Bowie County District Attorney's Office is thankful that this predator has been removed from our community and for the diligent investigative work of the Bowie County Sheriff's Office and Texas Department of Public Safety."