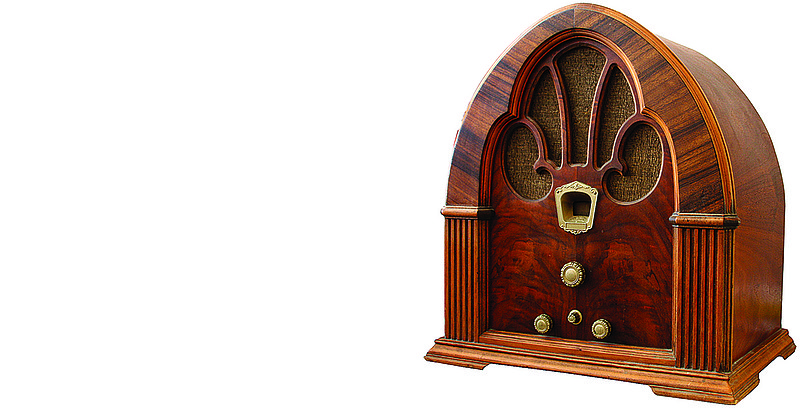 The Jefferson Opera House Theatre Players will bring live theater back to the area with onstage enactments of two short old-time radio plays at both 5 p.m. and 7 p.m. Sunday at Enoch's Wine and Coffee House: episodes of "Sam Spade, Detective" and a once-popular radio soap opera, "The Romance of Helen Trent."

Jefferson Opera House Theatre Players present two short plays at both 5 p.m. and 7 p.m. Sunday at Enoch's Wine and Coffee House: an episode of "Sam Spade, Detective" and an installment of the longtime soap opera "The Romance of Helen Trent."

It's a throwback to old radio shows, complete with microphones, sound effects and vintage 1940s costumes. Because of the ongoing pandemic and state guidelines, they will be allowed to seat only 25 theatergoers at each show.

"We had to think of something fairly simple, and something we could put together without any lengthy rehearsals or something like that," said director Marcia Thomas, noting the pandemic has cratered theater, even Broadway. 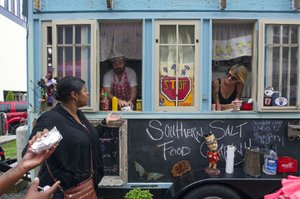 Photo by Benjamin Krain
Arkansas Democrat-Gazette/BENJAMIN KRAIN --9/5/14-- Antoria Harrison, left, is served lunch by food truck operators Mike Brown and Lauren McCants from their Southern Salt Food Company mobile kitchen during the first day of the Downtown Little Rock Partnership's weekly lunch event, Main Street Food Truck Fridays.
"It trickles down to the little community theater like we are, too," Thomas said. They don't have their own theater space, which makes productions a challenge for them. They're helped by grants, ticket sales and local support.

"It was just absolutely unthinkable, not anything we'd want to do to shut down completely," Thomas said. They opened their 33rd season last November with a two-women show. Typically, they do three shows per year, plus a couple of fundraisers.

She came up with the idea for a radio play production while looking through a book of old radio scripts from the '40s and '50s. "They were all good scripts out of radio," she said. Radio is a medium she remembers well, listening to it as she grew up.

"I decided to choose a script out of that book and to cast it as well as I could locally, and I thought, what a neat idea - we can bring back the '40s, '50s and simpler period of life," Thomas said. With older residents living in Jefferson, she thought it would take them back. "They'll probably enjoy it," she said.

The other part of the show is rooted in the director's old recollection of this soap opera that was on air for decades about a woman named Helen Trent who was forever engaged.

"She could never finally get her man, and it went on and on and on," Thomas said, noting with the dated language it will be funnier if they play it straight. They also make sound effects during the show.

"That's another fun part. We're trying to make sound effects as they would have done back in the day when they had a live radio show," Thomas said.

There's no stage at the venue, but plenty of space is available for them to stage these two performances. The Sam Spade play will be a bit longer than the other, the director said, but it should add up to a bit more than an hour of theater in Jefferson, where nothing's been happening lately.

"I was so happy to have an opportunity to come back and do something for this community, to get people out," said Thomas, who's a native to Jefferson.

Director Thomas is working with actors both local and from out of town: Joe Todaro, Jane Coady, Sara Davis, Don Harris, Keith Lack, Mark McKay and Fran Hurley. Thomas also acts. Sound effects and costuming are being done by Scott Imhof and Thomas. Players membership will have first choice at purchasing tickets.

Typically the Jefferson Opera House Theatre Players do a musical in July, but with the pandemic that's up in the air.

(Tickets: $18 with a complimentary glass of wine included. Purchase tickets via JeffersonOperaHouseTheatrePlayers.com or call 903-665-8243. Tickets may also be available at the venue, Thursday through Saturday.)