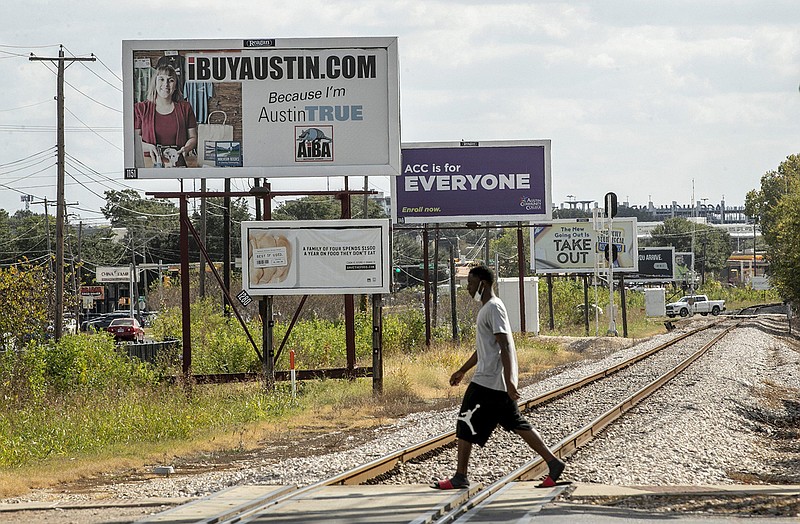 Billboards are lined up along Airport Boulevard. A federal appeals court ruled in August that Austin's ban on off-premise digital billboards violates the First Amendment freedom of speech. The city has asked the U.S. Supreme Court to review that decision. (JAY JANNER/AUSTIN AMERICAN-STATESMAN/TNS)

AUSTIN - A three-year legal battle involving Austin's ban on digital advertising on commercial billboards appears to be headed to the U.S. Supreme Court, an escalation by the city that could have rippling consequences throughout Texas and two other states.

Austin is among roughly 90% of cities in Texas that prohibit digital billboards anywhere except for on the premises of the business being advertised. The prohibition is aimed at protecting the aesthetics of the city's skyline and keeping motorists from being distracted by rotating advertisements for such things as whiskey brands and personal injury firms.

But the ordinance's future is uncertain after the New Orleans-based 5th U.S. Circuit Court of Appeals ruled in August that excluding off-premise billboards from going digital violates the First Amendment's protections on freedom of speech.

In reversing the decision of a federal judge in Austin who had upheld the city's ordinance last year, a panel of three appellate judges said that to classify a billboard as on-premise or off-premise, one must first consider the message that is displayed on the billboard. The city had argued classifications are based on location and not on the messaging.

The decision was a victory for advertising companies doing business in Austin and elsewhere in the footprint of the 5th Circuit, which has jurisdiction over federal appeals cases in Texas, New Orleans and Mississippi.

"This is a very broad, wide-reaching decision," said Margaret Lloyd, board president for Scenic Texas, a nonprofit dedicated to preserving the state's visual environment. "That's why we're concerned about it."

Austin appears willing to fight to the bitter end. On Nov. 12, the Austin City Council approved a legal services agreement with lawyer Renea Hicks to take the case to the Supreme Court. Hicks will ask the nation's highest court to review the 5th Circuit decision, a request that has long odds of getting a positive response. In a typical year, the court accepts only 100 to 150 of the 7,000-plus cases that it is asked to review.

Hicks said Friday he had not had an opportunity to thoroughly review the lower court's ruling. He has until Jan. 21 to file a writ. The city will pay Hicks $122,425.

"We believe the City Code's distinction between on-premise and off-premise signs meets the requirements that the Supreme Court set forth in the 2015 decision in Reed v. Town of Gilbert," city spokesman Andy Tate said in a written statement. "We are seeking Supreme Court review of the appeals court's recent ruling, and are optimistic the court will provide a clarification of the constitutional rules for billboard regulation that will allow the City to reinstate its regulations."

The case referred to by the city involved an Arizona pastor whose church was cited for exceeding time limits when displaying signs and for not including the date of services on a sign. After failing to get relief from lower courts, the pastor asked the Supreme Court to review the case. The court's majority ruled that the city's sign code was content-based and did not survive a strict scrutiny standard necessary to be constitutional.

The 5th Circuit invoked that ruling in making its decision in the lawsuit involving Austin. The opinion came from three judges appointed by President George W. Bush, who suggested the Arizona case resulted in a sea change in how courts interpret the First Amendment as it relates to billboards.

"The sign code does not need to discriminate against a specific viewpoint to be content based," Judge Jennifer Walker Elrod wrote.

Two leading advertising companies in Austin are behind the lawsuit: Reagan and Lamar. Between them, they filed 83 permit applications to install digital sign faces on existing billboards in 2017. The city denied all 83 applications, citing the code that prohibits digital billboards at off-premise locations.

Reagan filed the lawsuit in a Travis County state District Court in June 2017 and the city moved it to federal court a month later. Shortly after, Lamar intervened in the case.

At the time of the denied applications, the city defined an off-premise sign as "a sign advertising a business, person, activity, goods, products, or services not located on the site where the sign is installed, or that directs persons to any location not on that site."

The city amended the sign code in August 2017 to broaden the definition for an off-premise sign, but the changes did not have a major impact on the litigation.

"We feel very confident about our case as we have from the beginning," said Russ Horton, a lawyer representing Reagan.

Horton said he'd be surprised if the Supreme Court accepted the case given that the court reviewed the Reed case in Arizona only five years ago. Plus, he said, the court recently declined to review another case in which an appeals court struck down restrictions on off-site billboards in Tennessee.

But Council Member Kathie Tovo said she supports taking the litigation to the Supreme Court.

"I believe the city's prohibition of off-premise digital signage stands on solid legal ground, and I support the city's continued defense of these regulations by seeking review from the U.S. Supreme Court," Tovo said in a written statement.

Tovo's downtown district includes 20 billboards that could be digitized with the city code stricken down.