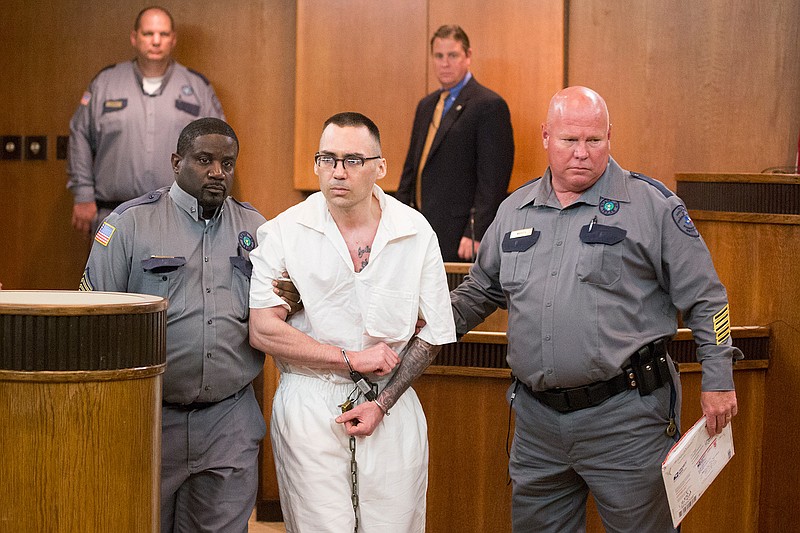 Tracy was found guilty in the fall of 2017 in the brutal beating death of Barry Telford Unit Correctional Officer Timothy Davison. A video of Tracy slipping a hand free of its cuff and attacking Davison was played for the Bowie County jury that found Tracy guilty of capital murder.

Tracy, 42, had a long history of violence both in and out of prison before he attacked 47-year-old Davison the morning of July 15, 2015, during a routine walk from a prison day room to Tracy's one-man cell in administrative segregation. Tracy, who packed all of his personal belongings before walking out of his cell for an hour of recreation, violently struck Davison with fists he'd managed to free of their cuffs.

Tracy then grabbed Davison's tray slot bar, a tool used to manipulate the rectangular openings in cell doors, and beat him to death.

Tracy filed a motion Thursday in the Texarkana Division of the Eastern District of Texas for a court-appointed lawyer to represent him in a federal appeal. In his motion, Tracy claims that the two Capital Habeas Units in the state that typically provide representation to death row inmates cannot accept appointment currently to his case because of "staffing and caseloads."

Tracy asks the court to appoint Jennifer Merrigan as lead counsel in his federal appeal.

"Ms. Merrigan is an adjunct professor at Saint Louis University Law School and Washington University School of Law, where she founded and teaches a death penalty clinical practicum," the motion states. "Ms. Merrigan has represented people facing sentences of death and life without parole for 15 years. Her training and background are in capital mitigation, and she has been appointed and has consulted in state and federal habeas corpus, pre-authorization, and trial cases as a mitigation specialist and as counsel. She is a former staff attorney and Acting Director of the Death Penalty Litigation Clinic, a non-profit law firm in Kansas City, Missouri."

The case has been assigned to U.S. District Judge Michael Truncale of Beaumont, Texas. Truncale has not ruled on Tracy's motion requesting Merrigan's appointment to his case.

Tracy is currently being held at the Polunsky Unit in Livingston, Texas.