TISD wants to buy dilapidated Pine Street school property back | They plan to 'knock it down,' says owner John Stone; historic status may be an issue 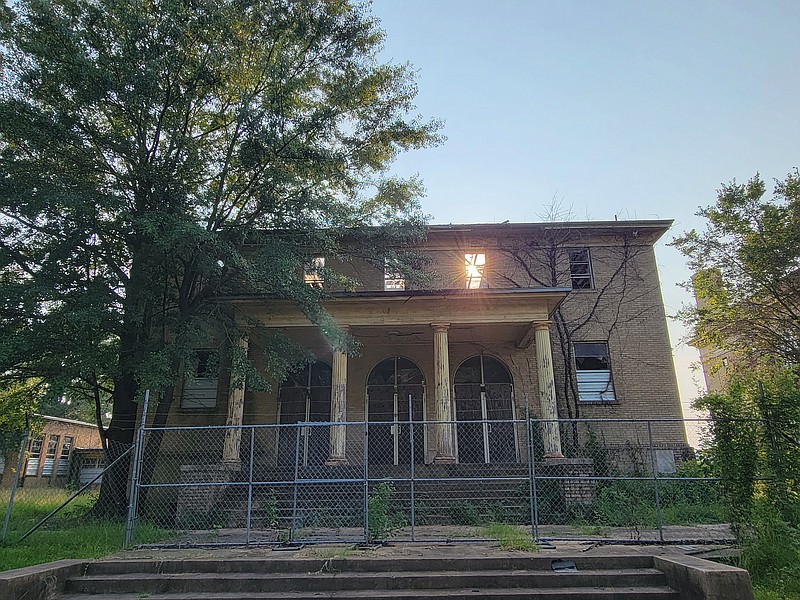 Sunlight glares through an open window late Friday afternoon, made possible because there is no longer a roof above it. This long-vacant building on the Pine Street school campus is now privately owned. The Texarkana Independent School District board on Friday voted to acquire the property through the eminent domain process.

TEXARKANA, Texas - The Texarkana Independent School District Board of Trustees discussed a resolution authorizing the acquisition of property at 1915 Pine St. by purchase, if possible, during a special called meeting on Friday.

The building on this property formerly served as the district's high school campus, before becoming Pine Street Junior High School in 1967. The last class for the property was held in 1996, and the building was officially retired by TISD in 2003.

The building's current owner, John Stone, acquired the campus in a land swap with TISD in 2005. Stone also owns the long-vacant McCartney Hotel in downtown Texarkana.

At the time he bought the Pine Street property, Stone proposed a plan for senior loft apartments, among other potential uses.

"The Pine Street property has been left in complete disrepair by the current property owner," Board President Fred Norton, Jr. said via a news release Friday. "After years of inattention and of natural decay, it has become an eyesore, a public health hazard and a detriment to our community's surge of economic development. At this juncture, the property cannot be transformed absent an extraordinary and nonsensical injection of private capital. Texarkana and the Highland Park neighborhood, in particular, deserve better.

"TISD board of trustees desires to reclaim the property for a potential new campus development, adding to the revitalization of the neighborhood. We see this new 'start over' as a key part to our upcoming Strategic Planning efforts and as an obligation to our tax payers."

On Friday, Stone, told the Gazette he wasn't made aware of the called meeting and said he hasn't been offered a fair price for the property.

"We have had some emails and meetings in the past with them where they have offered us less than what we even have in the property, and we have rejected their offers in the past," Stone said. "We had one a couple of months ago where they said 'we want to buy your property, and then we want to knock it down.' And we said 'well, that's a non-starter.'"

Stone said his business was originally planning on spending around $8 million to renovate the property to add the apartments, but put it on the back burner upon learning about Wadley Regional Medical Center's poor financial standing at the time, which he said would severely hinder the value of the apartments he was planning to build.

"We were not told by the school district, prior to exchanging in it - and many of them were also on the board at that time of Wadley Regional Medical Center - that Wadley Regional Medical Center was going bankrupt," he said. "We were never advised of that material fact. If you're about to go from over 2,000 employees to 125 employees, which is what happened there, then that would obviously kill demand for apartments in that location."

(In 2019, Texarkana Regional Chamber of Commerce listed Wadley as the region's 10th largest employer with 719 employees.)

Stone then looked towards getting the property listed on the national register.

Stone said it would take a clawback provision from the district that they would never tear down the historical buildings for him to consider another offer.

"It's against the law to tear down a national register property," he concluded.

Betty Williams, Ward 3 member of the Texarkana, Texas City Council, said she thinks the building's shape has brought the quality of the city down.

"It's just been a great disappointment in my ward for many years that that building has just stood there and gone downhill," Williams said. "It just brings a lump in my throat because both of my children went there, and I just cannot understand why he has allowed that building to deteriorate like that.

"At this point, it just needs to go away because I don't think it can be salvaged, and it's certainly an embarrassment to the national register that they would include something like that as part of their program."

The Pine Street property originally served as Texas High School's third campus, which was completed in 1930. The facility was designed by the architectural firm of Witt, Siebert and Haley and was constructed by Oats Building and Construction Co. It was built for 750 students and through the years housed between 400 and 1,343 students.

A series of additions to the campus were made in the 1940s for expansion. By September 1967, Texas High School was moved from Pine Street to Kennedy Lane, and the building became the junior high school.