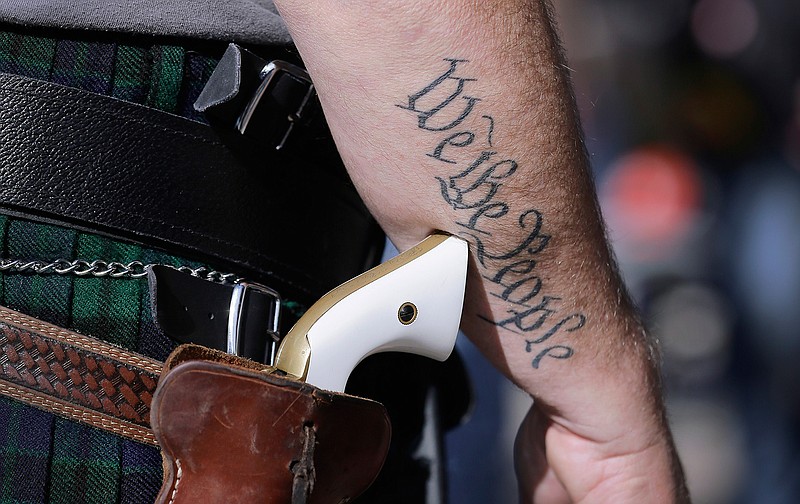 In this Jan. 26, 2015 file photo, a supporter of open carry gun laws, wears a pistol as he prepares for a rally in support of open carry gun laws at the Capitol, in Austin, Texas. Texas lawmakers have given final approval to allowing people carry handguns without a license, and the background check and training that go with it. The Republican-dominated Legislature approved the measure Monday, May 24, 2021 sending it to Gov. Abbott. (AP Photo/Eric Gay, File)

TEXARKANA - The Texas Legislature passed a state constitutional amendment during this year's legislative session. The new law increases legal protections for Texas gun owners, but according to Tiffany Phillips, a program attorney for U.S. Texas Law Shield, the full effects of the new law will be revealed as it is applied in real world situations.

U.S. Texas Law Shield put on a seminar at Wake Village First Baptist Church to let attendees know about the new law and how it applied to them.

"It is a state constitutional guarantee," Phillips said Monday. "But as with all laws, there is grey area, not black and white."

Her first advice, for those who care about constitutional guarantees and rights, was to use those rights, including those of the 2nd Amendment.

"However, everyone who has been watching what is going on in the culture, there is strong animus among many against firearms and 2nd Amendment rights," she said. "Remember Jack Wilson, the man who used his weapon to stop a gunman at the West Freeway Church of Christ? He still had to take a ride through the criminal court system and is having to deal with the civil courts as well. If you have to use your firearm, be prepared for these possibilities."

Only handguns are covered under Texas Constitutional Carry.

"I still advise those who wish to exercise their right to carry to obtain a license to carry or keep it if they already have it," she said. "Don't just rush out and get that new gun. Get trained, educated and protect yourself. And keep in mind, the law does not go into effect until Sept. 1."

Under Texas Constitutional Carry, those who can carry must be 21 years of age (exception, those in active military or honorably discharged), must not be felons or convicted of domestic assault or under protective orders. Certain misdemeanors can disqualify you, as well.

In addition, she emphasized those who care about gun rights need to pay attention to what the federal government is doing.

"Due to the Supremacy Clause, Federal laws can supersede state laws," she said. "Keep in mind your local government may have an anti-gun bias. A local prosecutor may be overzealous and want to make an example of you, should you be involved in a firearm situation, take you on that ride through the judicial system."

In addition, there is a whole list of places where those carrying generally are not permitted to carry their firearms, though being licensed to carry may grant more leeway. These include schools, polling places, courts, secured areas of airports, hospitals and more.

"However, government meeting places, like city council chambers, school board areas and the like, you are permitted to bring in your weapon, if you are licensed to carry."