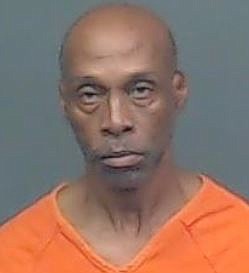 TEXARKANA, Texas -- A convicted sex offender accused of breaking into the home of a disabled Texarkana woman was indicted Thursday by a Bowie County grand jury for multiple felonies.

Everick Lovosier Monk, 58, allegedly broke into the woman's home by removing a window air conditioning unit in the early hours of Oct. 26, according to a probable cause affidavit. The woman, a stroke victim, reported she was in bed sleeping when she woke to find Monk in her bedroom. The woman reported that the man she knew as "Eric" had been knocking on the doors and walls of her residence for about a week but she would not let him inside.

At a bond hearing before 202nd District Judge John Tidwell last month, Texarkana, Texas, police Sgt. Brad Thacker testified that the woman told investigators that Monk covered her mouth with his hands and said, "If you don't give it to me I'm going to take it," before sexually assaulting her. Monk allegedly displayed a knife during the attack and allegedly struck the woman in the face multiple times, causing her to lose consciousness, Thacker said.

While responding to the woman's call for help, emergency dispatchers received a 911 call from a concerned citizen who reported a possible drunk driver near the alleged victim's residence. The license number provided by the citizen showed the car was registered to Monk and that he is a registered sex offender with a history of committing a sexual offense with facts similar to those in the case reported that night.

Officers quickly made a connection between the attack on the disabled woman and the call about a drunk driver. Monk allegedly failed to immediately stop when officers attempted to pull him over.

Monk was convicted in 1994 of breaking into an elderly woman's home during the day, according to testimony at the bond hearing. When the woman emerged from her bathroom in a robe, Monk raped her. Monk was convicted of rape, robbery and burglary in Arkansas in 1994 and sentenced to 40 years.

Monk also has a conviction in California for lewd and lascivious acts with a child under 14 years by force.

Arkansas Department of Correction parole records show Monk was approved for release most recently in April 2020.

Monk was first paroled in Arkansas in 2008 and has been arrested in 2010, 2014 and 2021 for failing to comply with sex offender registration requirements.

At the time of his arrest, Monk was free on a $25,000 bond for failing to register as a sex offender in Columbia County, Arkansas. Monk was released on the bond in Arkansas on Oct. 12, two weeks before he allegedly broke into the Texarkana's woman's home.

Monk faces five to 99 years or life in prison if convicted of either the burglary or sexual assault charges. The minimum punishment ranges could be enhanced because of his prior convictions.

Monk is currently being held in the Bowie County jail. Tidwell set bonds totaling $3 million in the case. Records show Arkansas parole and Columbia County, Arkansas, have placed holds on Monk as well.