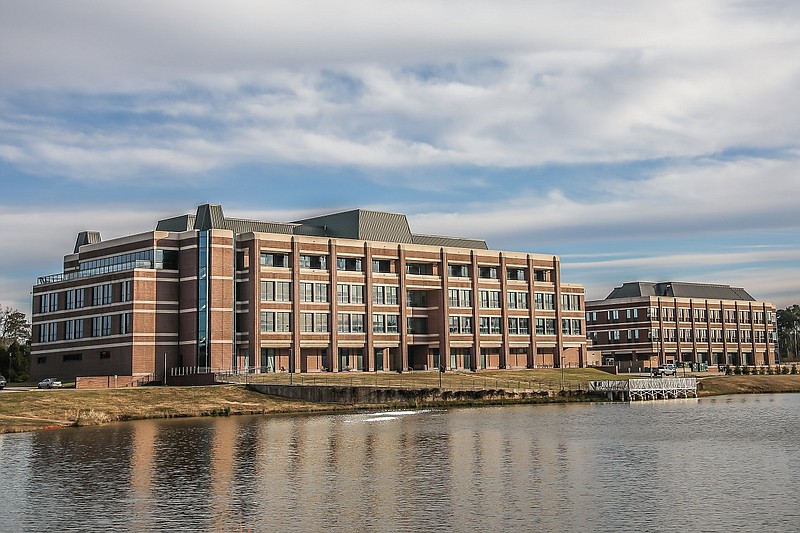 That's 50 years as an institution, 25 years as a member of The Texas A&M University System and 10 years of breaking new ground at its location near Bringle Lake.

While system leaders are constantly focused on future goals and what's to come, they believe it is also necessary to look to the past for lessons on how to best move forward.

Whether it was East Texas State University at Texarkana, an upper level institution long located on the Texarkana College campus, or the four-year university at its current location, the college's primary mission has always been the same.

"Its legacy is expanding the higher education options and availability for this region, which has been traditionally underserved in higher education," President Dr. Emily Cutrer said. "I think the biggest lesson is to learn from, listen to, participate with and partner with our community. That has been key from A&M-Texarkana's beginning, and we should never, ever lose that."

To continue this mission and legacy, TAMU-T started working to raise $500,000 in scholarship donations to celebrate a half century in higher education.

The college has not only met that goal, but has exceeded it. As of Thursday, TAMU-T has raised $932,000 through these fundraising efforts that will go towards improving and expanding its programs.

To be able to provide opportunities to students through community support at its current rate, various milestones and checkpoints had to be passed throughout the program's history to eventually become Texarkana's first four-year university.

50 Years as an Institution

In June of 1970, East Texas State University President D. Whitney Halladay announced plans to establish an upper-division campus of ETSU in Texarkana after a state education board determined graduates of the state's two-year colleges were in need of more opportunities to continue their education without traveling long distances to do so.

Shortly after the 1970 plans were announced, $450,000 was approved in an appropriations bill to fund the first two years of development for the ETSU Texarkana Center.

The next order of business was to find a president for this division. Dr. John Moss, who was then an assistant dean in the College of Education at ETSU, was selected for this job in 1971.

Moss had his work cut out for him.

"When I was president, to think that the university would become what it has become 50 years later was beyond my imagination," Moss said in a past interview.

"The reason we were created in the first place, according to the Texas Legislature, was to serve placebound students. Placebound generally meant someone who was closer to age 30 than 20. And they hadn't gone anywhere because they had a job, they had a family, they had social involvement and they just couldn't get away."

Moss said that before the establishment of ETSU, the nearest place for people with two years of education from Texarkana College to go to further their education would be 70-100 miles away.

Moss managed to hire 12 full-time faculty members, whom he said were mostly either just graduating or getting their Ph.D.'s, and likely took the positions due to a tight job market at the time.

The assumption at the time was that ETSU would lease facilities with TC, but TC officials said they were limited on space. So, the faculty and staff available were housed in four classrooms.

The 12 faculty members who showed up worked in an "office" that was composed of folding card tables and metal chairs in the auditorium. Moss said two who were working in the school's ticket office complained that there were large rats in the vending machine.

"One of the things I look on with great affection when I think about starting out was the stick-to-it-iveness of those original 12 people to put up with all of that," Moss said. "They could've gone anywhere, but they came there."

The first enrollment numbers in the summer of 1972 accounted for 315 total students.

Despite the challenges, Moss and the staff grew from there and worked diligently with the resources available to them to keep the ball rolling. He said one of his key objectives upon arriving was using student fee money wisely for things like sending students to competitions statewide and nationwide and establishing clubs that corresponded with their majors.

"The most rewarding thing to me is that despite everything, failure was not an option," he said. "We were going to make this work. And they did make it work."

ETSU-T President Stephen Hensley (1994-2008) later joined in on these talks and helped get the ball rolling on making this possibility a reality.

"The main goal originally when I went there was to increase the academic programs of the university," Hensley said. "They were very narrow and limited. And in order to be a true university, we needed to expand those programs."

Serving around 1,200 students a year at the time, Hensley said it was hard to get legislation in his college's favor because of the low enrollment numbers. This played a factor in wanting to join the A&M System.

"I have to give credit to Dr. Jerry Morris, who was president of the East Texas State University system," Hensley said. "He was very much for that, and all he wanted to know was if I wanted to do it. And I told him 'You've got to be crazy if you don't think I want to do that. Let's go get it done.' So, that was what really opened the door for many of the good things that have taken place."

In February 1995, the ETSU Regents OK'd the merger with an 8-0 vote and one abstention.

Two months later, eight ETSU-T supporters drove more than 14 hours to and from Austin, Texas, to testify before the senate hearings on the merger. Despite their efforts, the Texas Senate unanimously approved the bill to merge.

Barry Thompson said in past interviews that this move made the A&M system visible in Northeast Texas, where it previously had not been as much as in other regions.

Hensley said this was perhaps his greatest accomplishment as the president of what at that time had just become Texas A&M University-Texarkana.

Hensley was not only a part of this momentous move to the A&M System, but he was an essential piece in the expansion of TAMU-T into a four-year institution with its own campus.

After becoming TAMU-T, Hensley and the university's next goal was to move toward downward expansion (adding freshman and sophomore curriculum).

Hensley was concerned about what he called "brain drain," or in other words, a large percentage of Texarkana students leaving to go to other universities due to the lack of a four-year university in the area.

But in 2000, Texarkana College President Dr. Carl Nelson expressed concern about the potential of TAMU-T leaving the TC campus, saying it would cost TC $3.2 million.

"We looked at that model, and unfortunately, Texarkana College did not want to go that way," he said. "In fact, they were fighting very much against it. So ultimately, it left us with only one thing to do. And that was if we were going to expand and expand downward, we had to find a location where we could build our own campus.

"We could begin to make our own statement to the community and the region and be recognized as a full-fledged, four-year university. And that is what drove that."

After many hoops and hurdles were endured, the Texas Legislature authorized A&M-Texarkana to continue with the plans of downward expansion in 2003. In 2004, the university acquired 300 acres of land from the City of Texarkana and 75 acres from the Truman and Anita Arnold Foundation to construct a new campus near Bringle Lake.

Construction began on the new campus in 2006, the University Center welcoming freshman and sophomore students arose in 2010 and the university's first residence hall opened in 2011.

From that point until now, TAMU-T has continued to expand, add programs and break ground as time goes on. And current TAMU-T President Dr. Emily Cutrer says they have no plans of stopping there.

Focusing heavily on student life and the development of intercollegiate athletics upon her arrival in 2013, Cutrer said these things play a huge role in not only keeping Texarkanians in Texarkana, but attracting people to the area.

"People really wanted an institution here to stop the brain drain, and we work on that. But we've also become a brain magnet by bringing people into Texarkana," she said. "We were at the point of taking off when I arrived."

Cutrer says the focus is now on expanding programs and providing as comprehensive and complete of a collegiate experience for students as possible.

Most recently, TAMU-T has received $45 million from the Texas State Legislature to build a new academic building, as well as $4.9 million over two years for a new physical therapy program and financial literacy program.

"I set out really early to emphasize three values and three goals for the institution. And those are academic excellence, student success and community leadership," Cutrer said.

"There's a lot more work to be done. We will keep on striving for all of those goals. And we've got a great team of people all across the university. And that team has done amazing work on each of these goals."