With its more than 90 entrants Saturday requiring an hour and 15 minutes to pass, the parade is likely the biggest in the area, including Texarkana.

Officials estimated as many as 2,000 to 3,000 people lined the route. Participants in the parade itself were probably 500 strong.

Participant Claude Crocker's experience was probably typical. He was told to bring his New Colony Baptist Church float with its riders to the staging area by 4:45 p.m. He made it. But being numbered 72 in the line, his float didn't get moving until 6:15 p.m.

"All the kids on the float just enjoyed watching everyone else in the staging area and then being part of the parade," said Jill Crocker, Claude's wife.

Vehicles of all kinds were especially prominent in this year's parade. Some were out-sized, too. There must have been 20 semi-tractor trucks -- all in a row and each polished to a high gloss -- blowing their air horns and flashing Christmas decorations.

The parade has a deadline for entrants of Wednesday before the Saturday. But many entrants called even on Saturday. During that day many final decisions were made about how to integrate everyone into a parade whose purpose is to have fun.

"It's simply a time to be happy," Jill Crocker said. "You have someone like organizer Miranda Johnson to make decisions then you trust no one will get confused and drop the ball. And you feed everyone into the parade. We maybe have 90 entrants but many of those entrants were composed of many people. We just tell ourselves we're OK and then go for it."

Gary VanDeaver’s long, low, white Eldorado Cadillac convertible certainly competed with the best of the entries in Atlanta’s Christmas parade. Santa Claus should have been so lucky as to have this for his travel. (Staff photo by Neil Abeles) 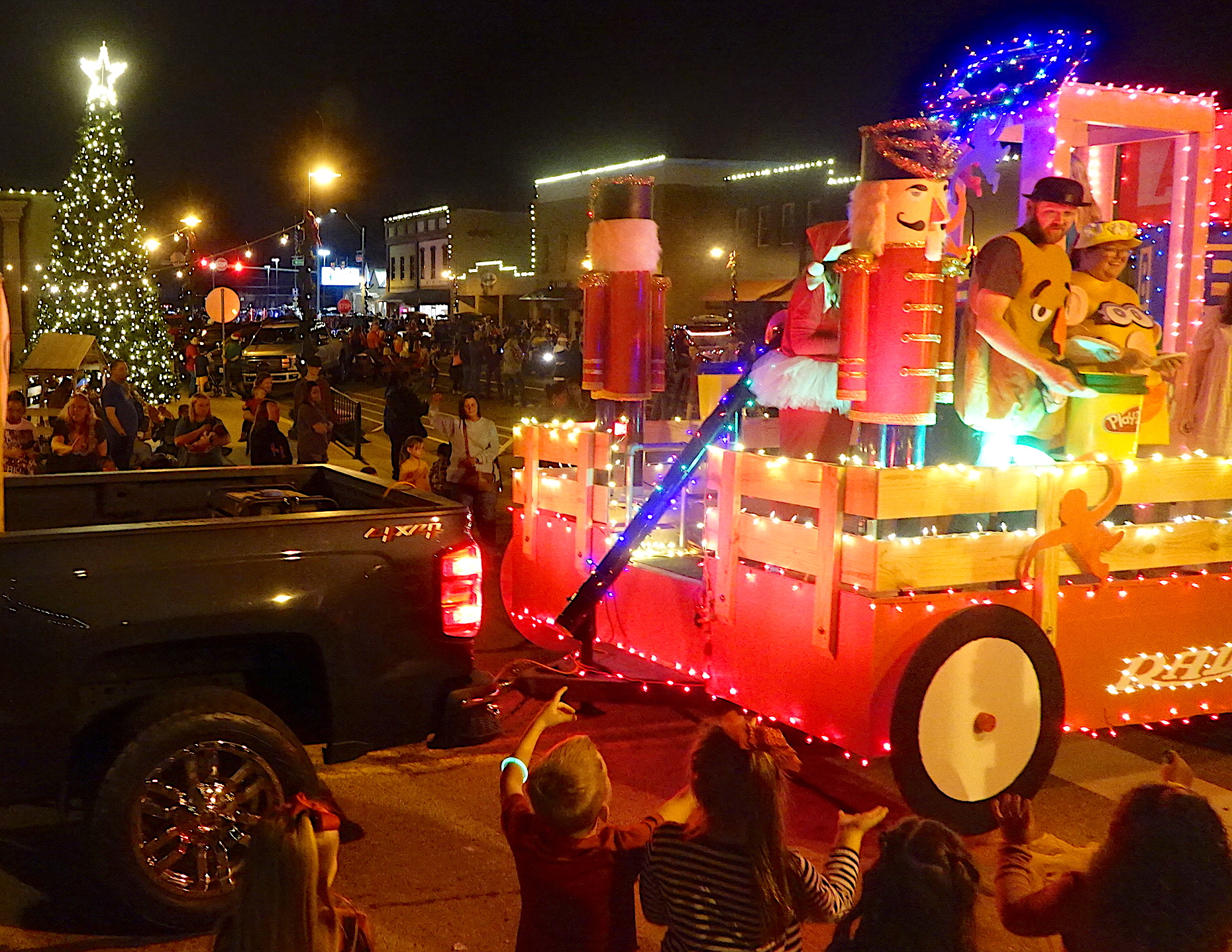 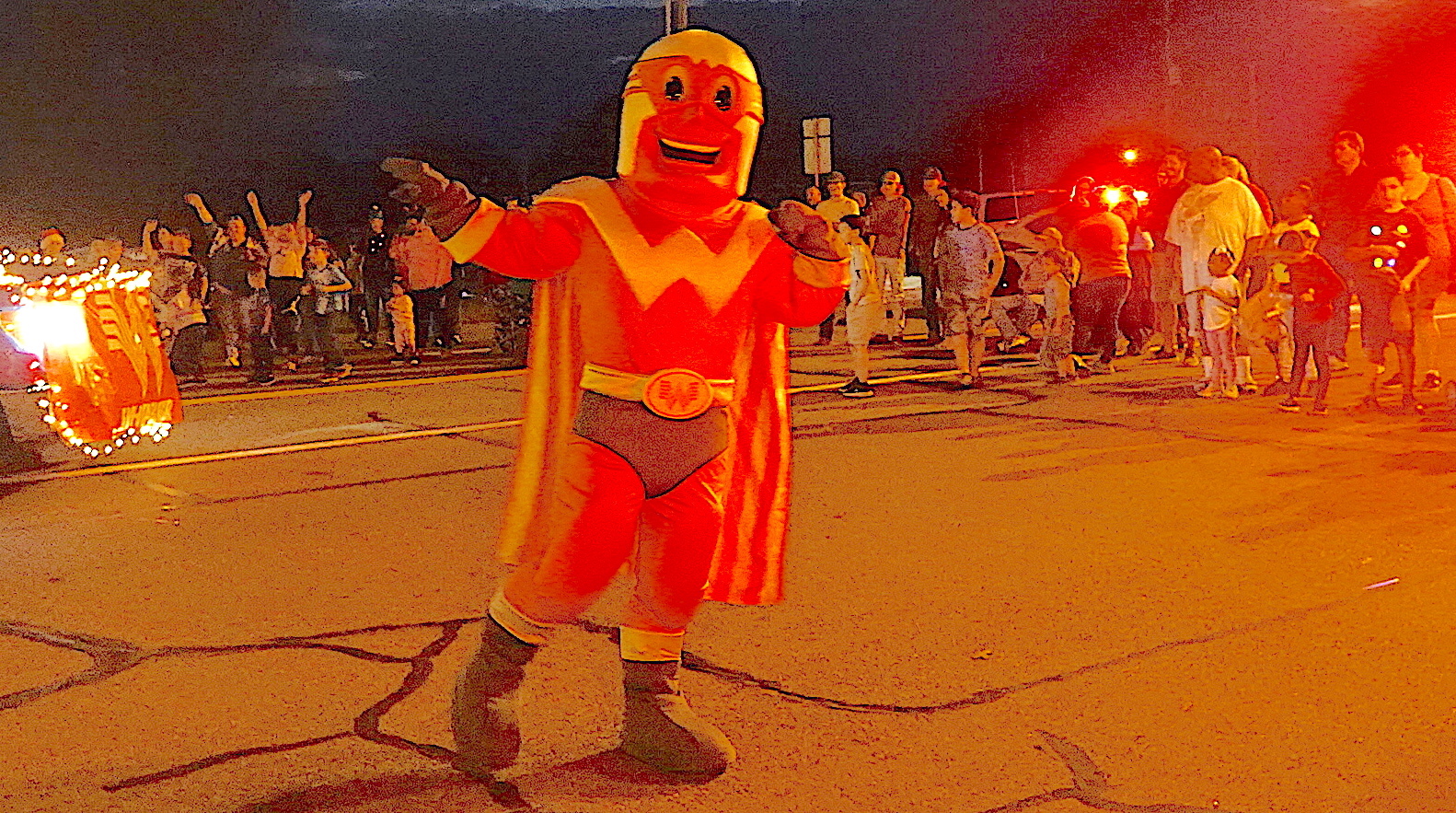 “What A Guy” from Whataburger made his initial appearance in this year Atlanta Christmas parade. As pictured, he was in a class by himself. (Staff photo by Neil Abeles) 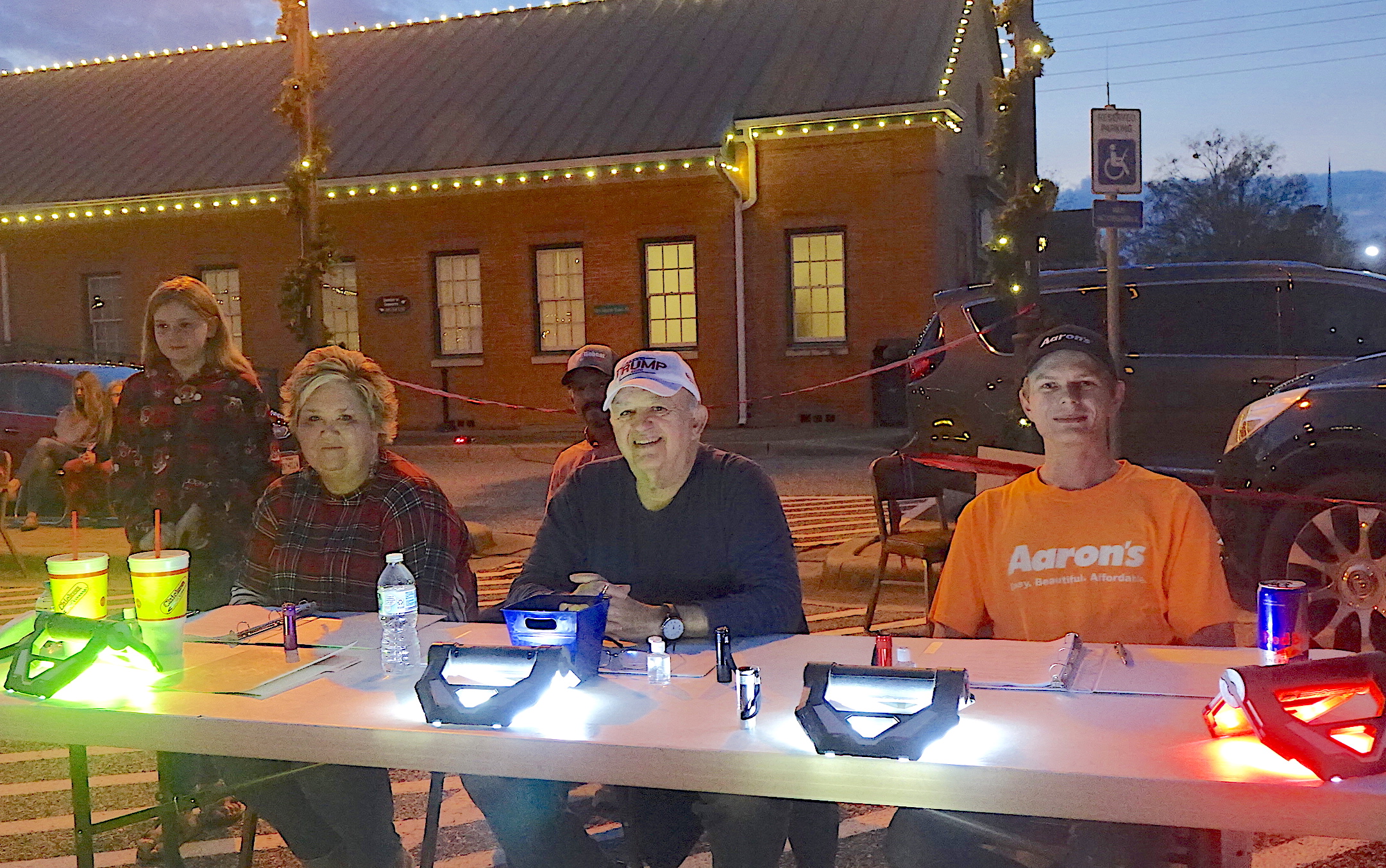 Preparing for the difficult task of judging more than 90 parade entrants are, from left, Luci Rabe, Danny Richardson and Train Anderson. Granddaughter Abigail Rabe is at left. (Staff photo by Neil Abeles) 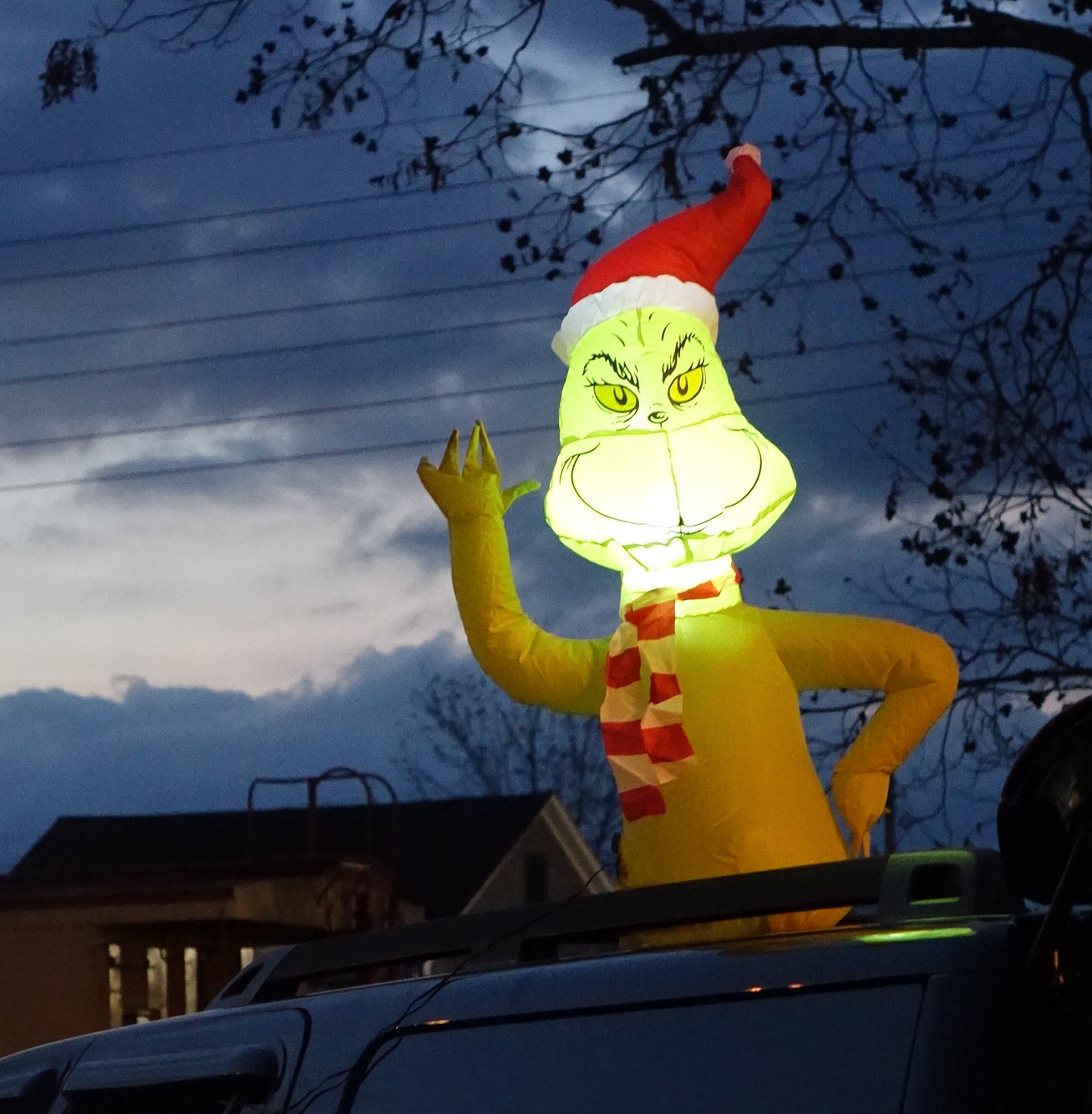 He’s in every parade these days, but still the Grinch is a favorite. Maybe it’s because he’s so self-confident and doesn’t have to throw candy to the kids or kisses to the adults. (Staff photo by Neil Abeles)

Kelsey Mangrum, center, and Taylor Boyd of Atlanta’s Family Eye Care Clinic are helping to re-create the Island of Misfit Toys being visited by Rudolph the Red Nosed Reindeer. The float won third best in the commercial division. (Staff photo by Neil Abeles) 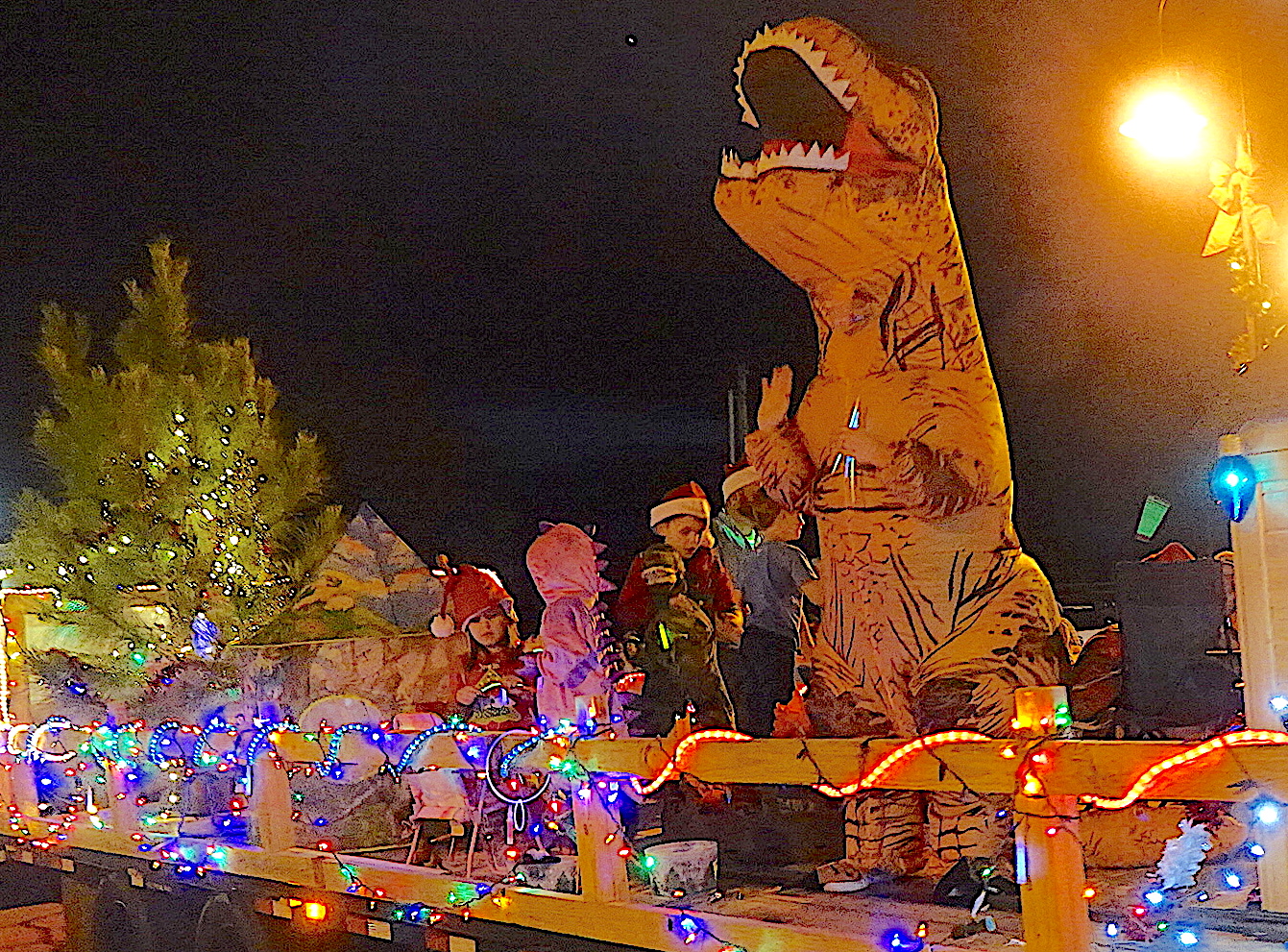 This dinosaur made its first appearance in the area during Halloween. He stayed around to join the Christmas parade, too. (Staff photo by Neil Abeles)