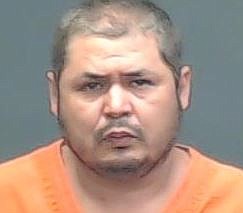 NEW BOSTON, Texas -- A man who sexually abused young girls for more than a decade was sentenced Thursday to 90 years in prison at the end of a jury trial in Bowie County.

The jury assessed maximum 20-year terms on each of the indecency charges and 102nd District Judge Jeff Addison ordered that two of the 20-year sentences run consecutively. First Assistant District Attorney Kelley Crisp said Pina-Salazar must serve 70 years before he is eligible for parole.

While five teen girls --ages 18, 17, 16, 16 and 13 -- testified about sexual abuse they suffered, Pina-Salazar was tried for misconduct involving four of them which occurred at residences in Bowie County. Some of the girls reported being abused beginning when they were 3 or 5 while others were abused less frequently and at locations in Dallas.

Four of the girls testified they were sleeping in a bedroom at a house in Texarkana in May 2019 after a graduation party and a day of family fun. In the early morning hours, Pina-Salazar came and went from the room, abusing each girl as he did.

"We have to send a message. This is not allowed in Bowie County," Assistant District Attorney Bradley Akins argued in closing remarks.

Assistant District Attorney Lauren Richards urged the jury to consider the impact of Pina-Salazar's depravity on his young victims.

"They will never have the lives we all want our children to have but what they can have is the rest of their lives without worrying about him," Richards argued. "Let's let them move on."

During the punishment phase of trial, the jury heard from Pina-Salazar's youngest victim, now 13, and the first girl to make an outcry of abuse she said was prompted by fear that an upcoming family gathering might mean more abuse.

"I did not want to go through this. It has brought a lot of mental illnesses for me. The trauma and the pain all come back sometimes," she said. "I'm going to get through it. I know that I am."