To grandmother's house or no? Omicron disrupts holiday plans 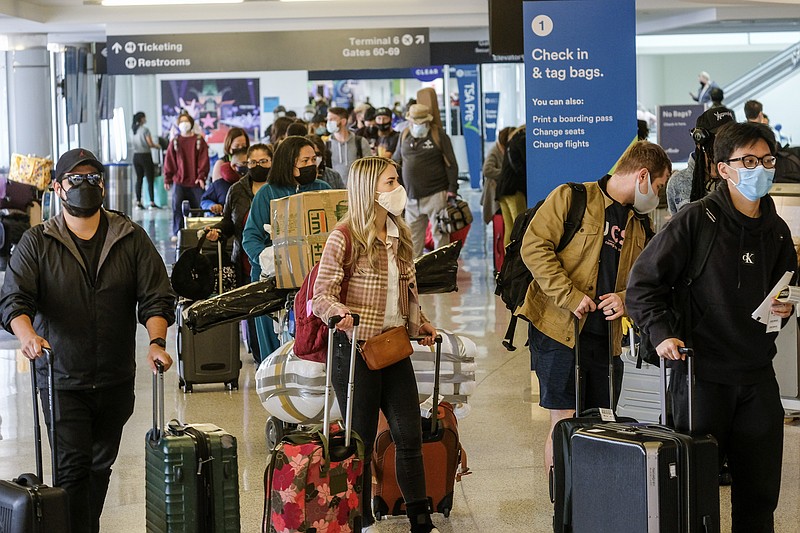 Dave Fravel and his wife invited several relatives to their Cape Cod home for Christmas to share food, gifts and the togetherness they've longed for during the lonely days of the pandemic. They were also looking forward to a holiday sightseeing trip to New York City.

But the coronavirus spoiled all those plans. With cases surging in their state of Massachusetts and the super-infectious omicron variant racing around the world, they feared spreading the virus even before Fravel's 18-year-old son, Colin, came down with COVID-19.

Rich England has been there before. In the summer, when the delta variant was surging, he said no to a Christmastime vacation with his parents and sister's family to London and Scotland. But he, his wife and 2-year-old daughter are keeping plans for a four-day trip from their home in Alexandria, Virginia, to Miami on Dec. 31.

"The safest thing to do would be to say 'OMG, we have to cancel,'" he said. "But there's a lot of letters in the Greek alphabet -- there's going to be variants after omicron. You can't just respond to every single variant by shutting down."

For the second year in a row, the ever-morphing virus presents would-be revelers with a difficult choice: cancel holiday gatherings and trips or figure out ways to forge ahead as safely as possible. Many health experts are begging people not to let down their guard.

World Health Organization Director-General Tedros Adhanom Ghebreyesus put it starkly this week when he said that "an event canceled is better than a life canceled."

But pandemic fatigue is real. And while travel restrictions in some places have forced cancellations, many governments have been reluctant to order more lockdowns, leaving decisions about who to see and where to go increasingly in the hands of individuals.

Complicating matters is the mystery that surrounds omicron. Scientists now know it spreads fast -- perhaps up to three times faster than the delta variant. It also seems to be better at evading vaccines, although boosters rev up protection, particularly against hospitalization and death. But a crucial question remains: Does omicron cause less severe illness than delta? Some research suggests that it does, but the studies are preliminary.

Even if it is milder, omicron could still overwhelm hospitals because of the sheer number of infections. That makes it difficult to know how far to turn down the dial on the festive season.

In the United States, infections average around 149,000 a day, and officials announced this week that omicron dethroned delta as the dominant variant. In Britain, where an omicron-fueled surge is seen as a harbinger for many other European countries, daily cases topped 100,000 for the first time on Tuesday. France, Spain and Italy are also seeing infection spikes.

Fravel and his wife, Sue Malomo, who are both software developers and have six children between them, are worried about omicron and delta. Fravel, 51, said they nixed their trip to New York City because "the thought of being in those big crowds didn't seem to make a whole lot of sense."

Neither did having lots of people at their house. Typically, 20 to 25 people filter through between Christmas Eve and Christmas Day. But this year, only the kids will come and not all at the same time.

England, an energy lobbyist, also weighed his options -- and decided a trip could be made. He and his wife both got booster shots, which reassures him, though his daughter is too young for the vaccine.

"We picked Miami in part because we would be able to eat exclusively outdoors and then spend time on the beach and at the pool," he said. But even he is still hedging: As of Tuesday evening, they were "80/20 going."

Colombia native Julieta Aranguren has already begun her trip. The 18-year-old was on a stopover in Madrid on Wednesday on her way to Dubai, where she planned to spend time with relatives. She spent thousands of dollars on flights and hotels -- booked nine months ago -- so she said that she didn't consider canceling.

But she still faces the unknown. Her group plans to go shopping, dine out and visit the World Expo in Dubai, so "it would be no fun at all if there were more restrictions," Aranguren said.

It's still unclear which path most people will take. Ryanair, Europe's biggest airline, lowered its forecast for the number of passengers for December from 11 million to 10 million, chief executive Michael O'Leary told the Guardian last week.

Both airlines noted that international travel was the most affected by the omicron variant.

That rings true for Alex Wong. The freelance journalist and radio producer in Toronto canceled a mid-December flight to New York that would have been his first trip since the pandemic began. He worried about being stuck in quarantine upon his return, which would leave him unable to see his family during the holidays.

"Feels like I made the right decision and feel better by the day," he said in a text message. He's getting a booster shot on Wednesday and seeing his parents, who live nearby, this weekend.

That is the sort of balanced calculation many experts recommend.

Matthew Binnicker, director of clinical virology at the Mayo Clinic in Rochester, Minnesota, said people should consider taking a rapid test for COVID-19 on the day of a gathering or, better yet, a more accurate PCR test 24 hours in advance. But experts warn that tests are not a firewall against infection.

"It's a good idea to kind of rethink big plans of travel or getting together in large groups," he said.

Small groups of less than 10 people can gather in safety if they ensure that everyone is vaccinated, wear masks indoors and encourage people most vulnerable to severe disease to stay home. Other experts suggest opening windows to improve ventilation and staying outdoors as much as possible.

"To me, the holidays are a time to think about others. This is often expressed through gift giving, charitable donations or volunteering," Binnicker said. "But this year, there's another excellent way to think of others, and that's to take precautions to stop the spread of COVID-19 and influenza." 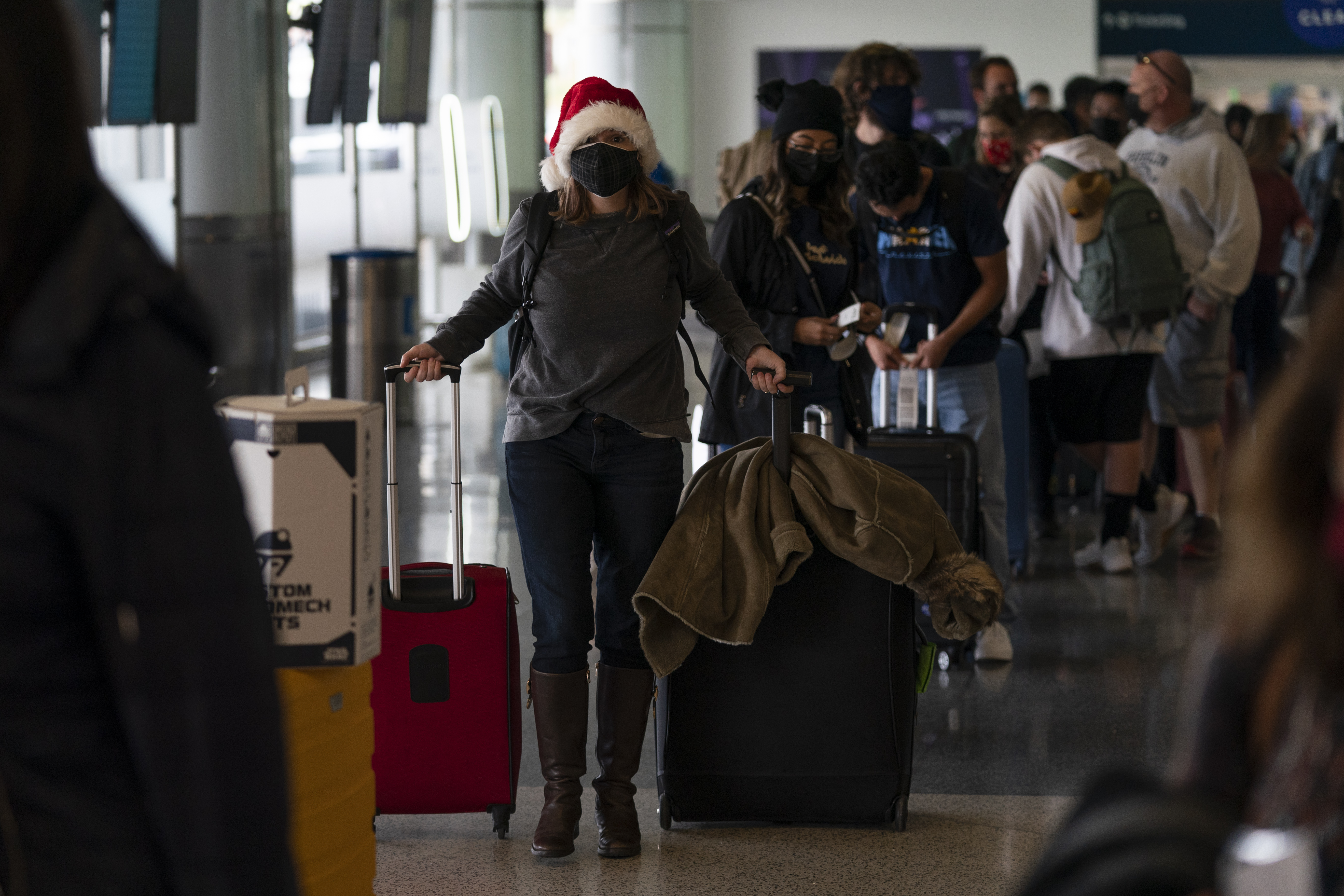 FILE - Donning a Santa Claus hat, Caitlin Banford waits in line to check in for her flight to Washington at Los Angeles International Airport in Los Angeles, Dec. 20, 2021. For the second year in a row, the ever-morphing coronavirus presents would-be holiday revelers with a difficult choice: cancel their trips and celebrations yet again or figure out how to forge ahead as safely as possible. Many health experts are begging people not to let down their guard, but pandemic fatigue is real. While travel restrictions in some places have forced cancellations, many governments have been reluctant to order more lockdowns. (AP Photo/Jae C. Hong) 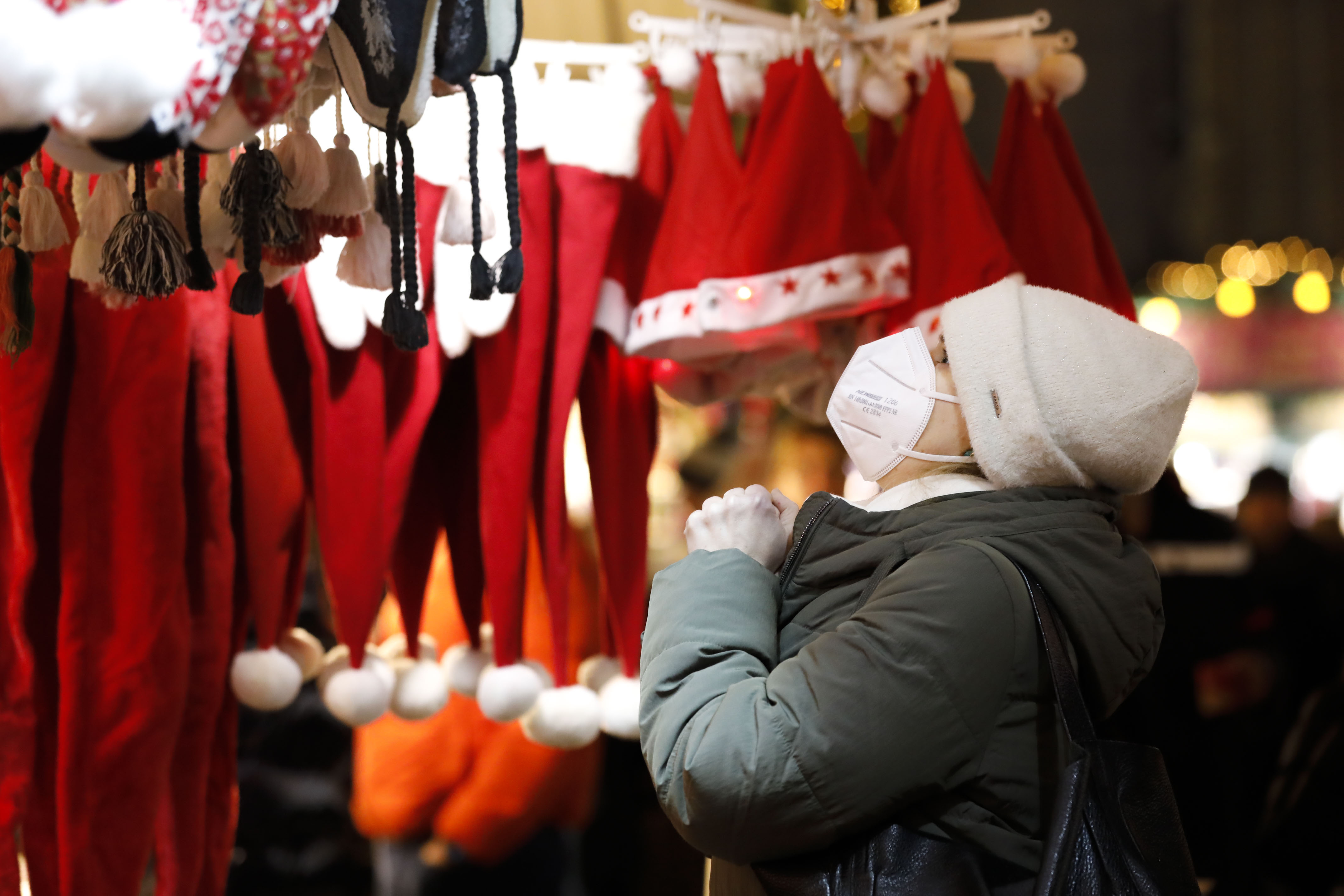 A person wearing a mask looks at a stand at a Christmas market for a Santa Claus hat in Vienna, Austria, Wednesday, Dec. 22, 2021. (AP Photo/Lisa Leutner) 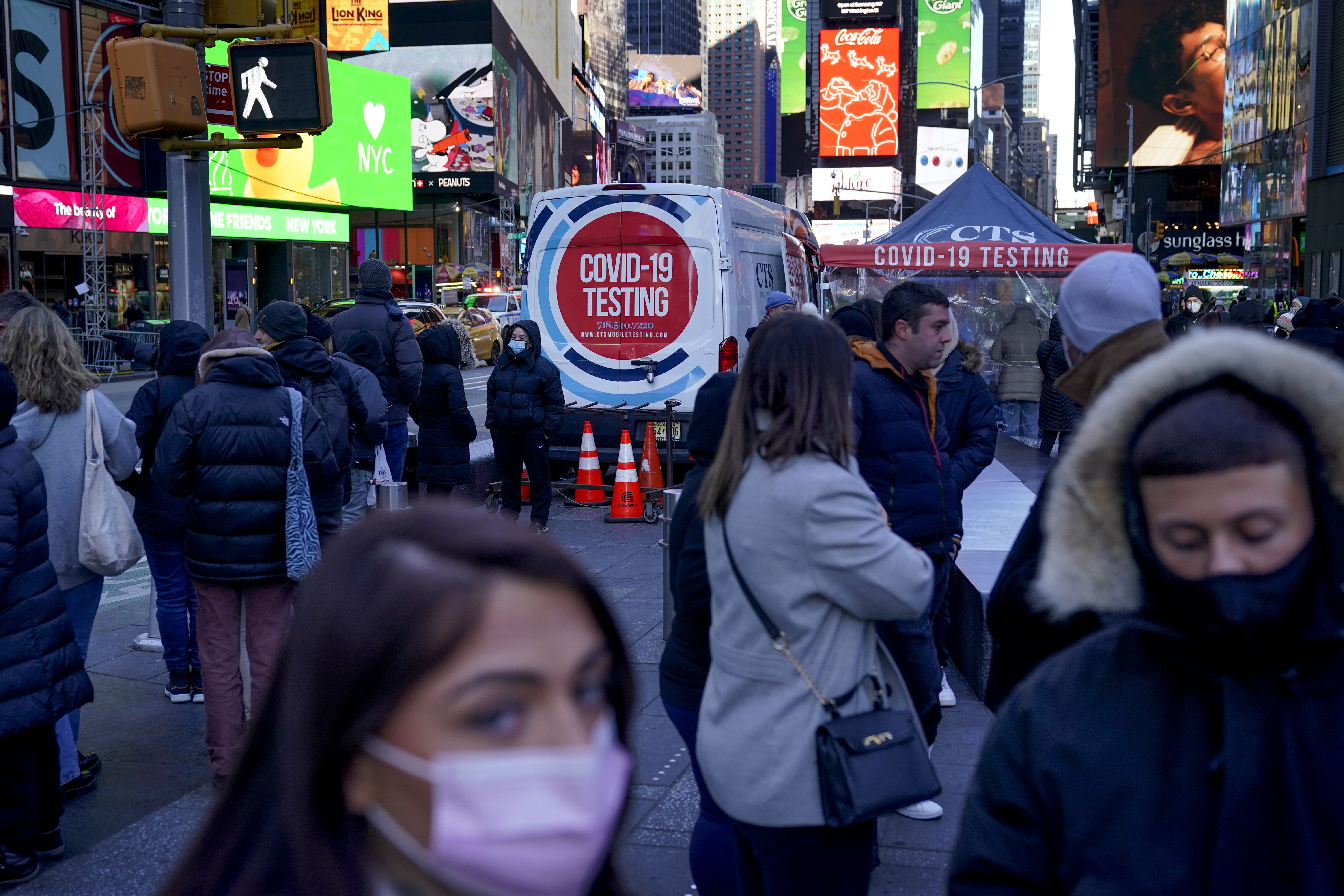 FILE - People wait in a long line to get tested for COVID-19 in Times Square, New York, Dec. 20, 2021. For the second year in a row, the ever-morphing coronavirus presents would-be holiday revelers with a difficult choice: cancel their trips and celebrations yet again or figure out how to forge ahead as safely as possible. Many health experts are begging people not to let down their guard, but pandemic fatigue is real. While travel restrictions in some places have forced cancellations, many governments have been reluctant to order more lockdowns. (AP Photo/Seth Wenig, file) 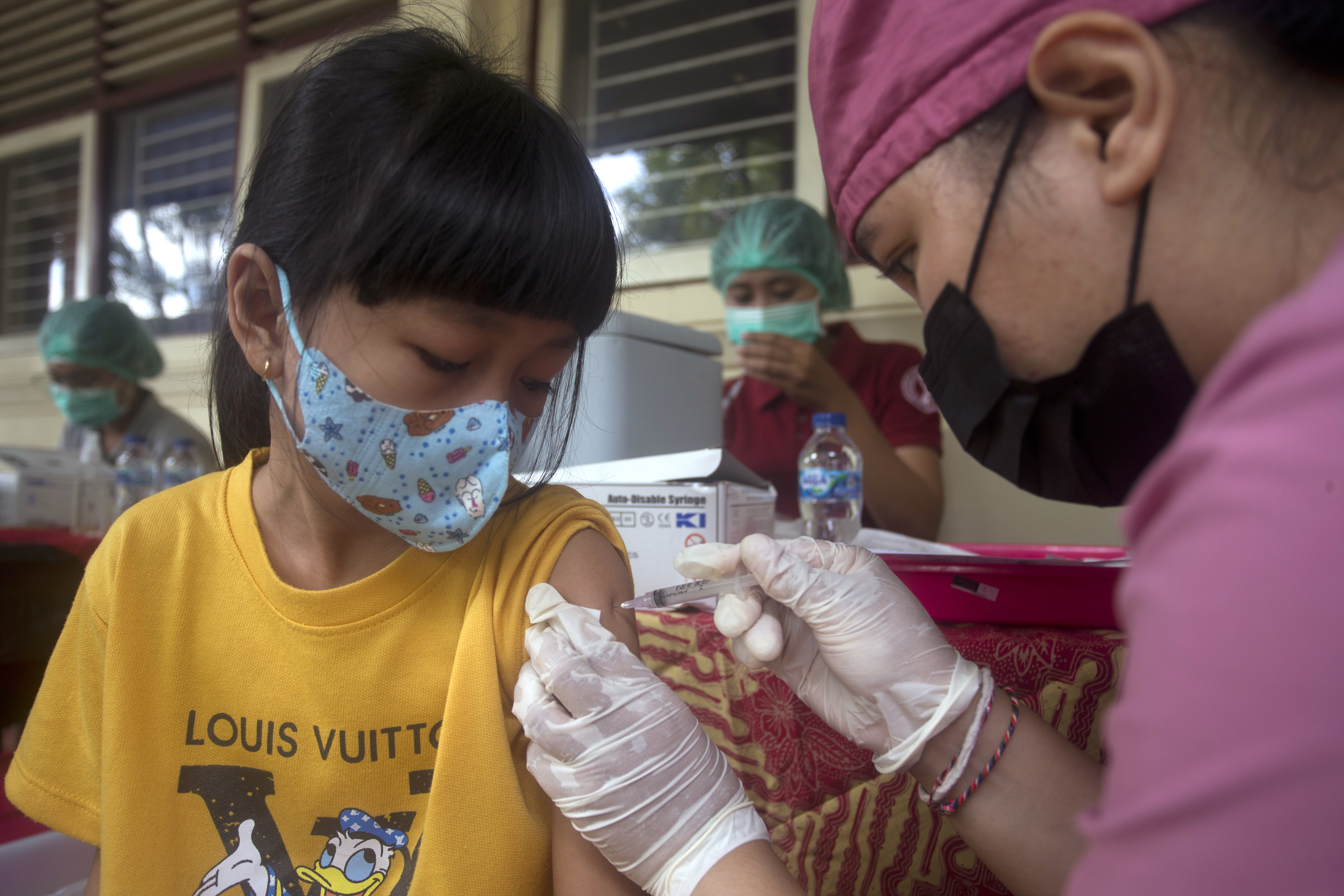 A girl receives a shot of the Sinovac COVID-19 vaccine during a vaccination campaign at an elementary school in Bali, Indonesia on Thursday, Dec. 23, 2021. (AP Photo/Firdia Lisnawati) 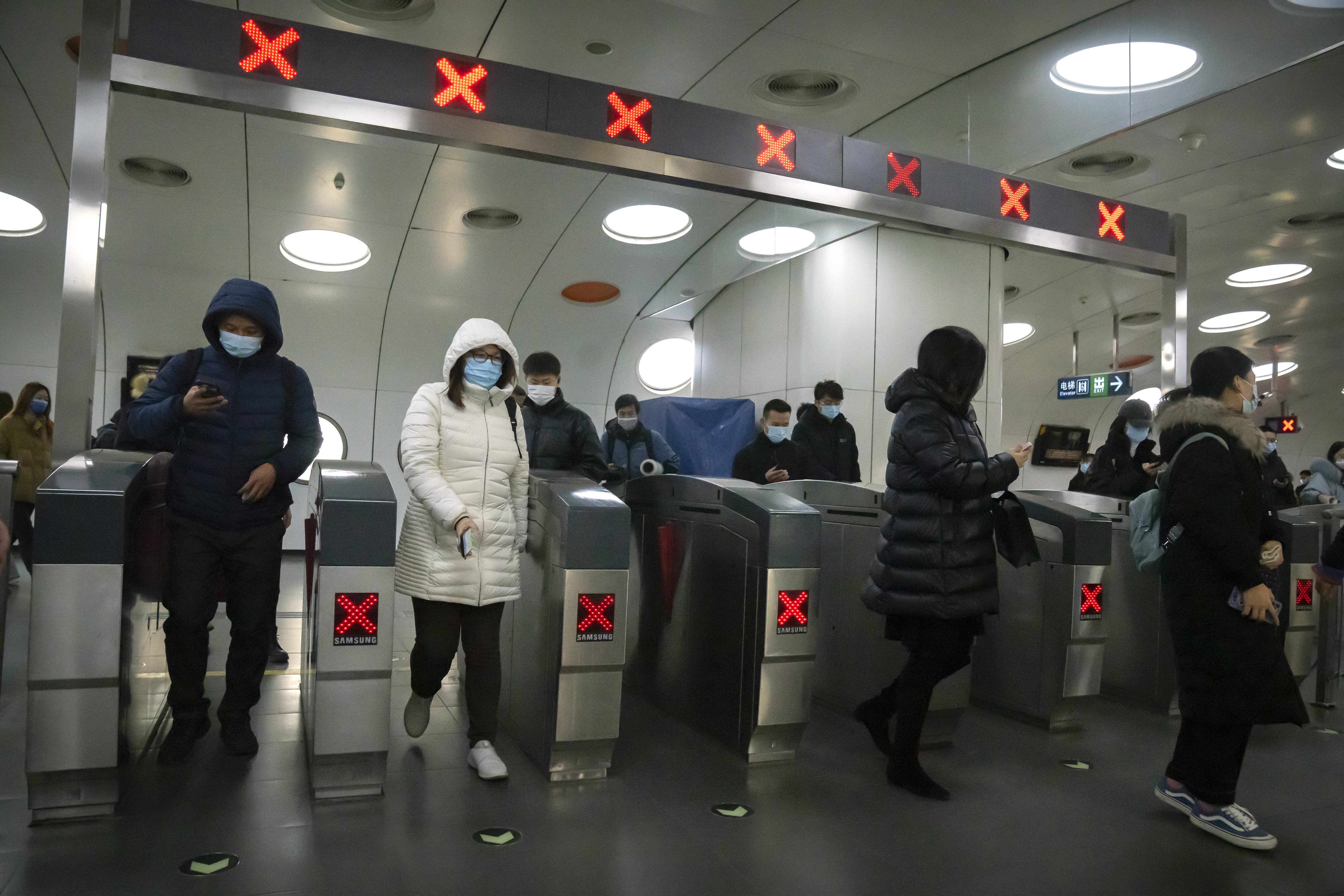 Commuters wearing face masks to protect against COVID-19 exit a subway station in the central business district in Beijing, Thursday, Dec. 23, 2021. China ordered the lockdown of as many as 13 million people in neighborhoods and workplaces in the northern city of Xi'an following a spike in coronavirus cases, setting off panic buying just weeks before the country hosts the Winter Olympic Games. (AP Photo/Mark Schiefelbein) 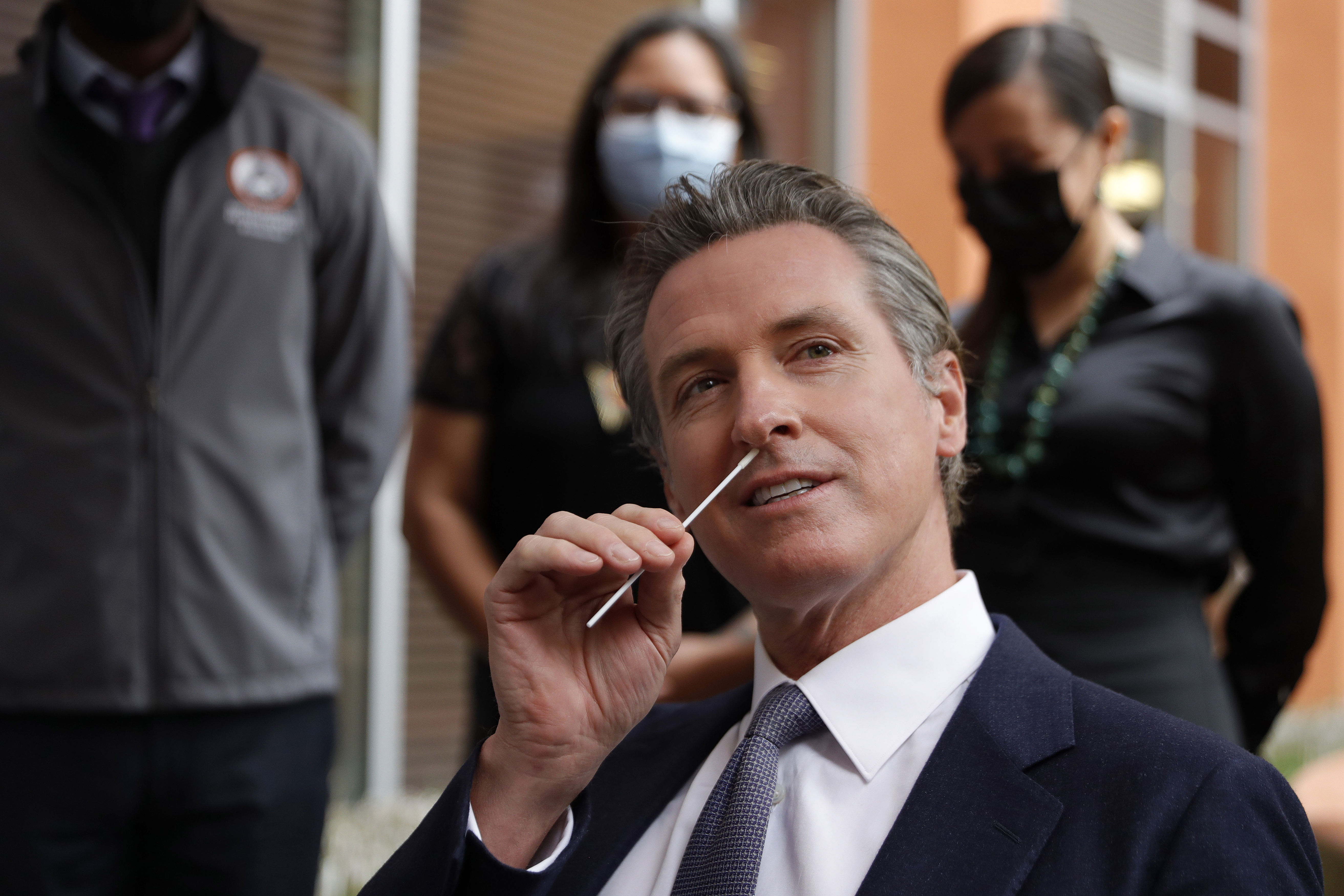 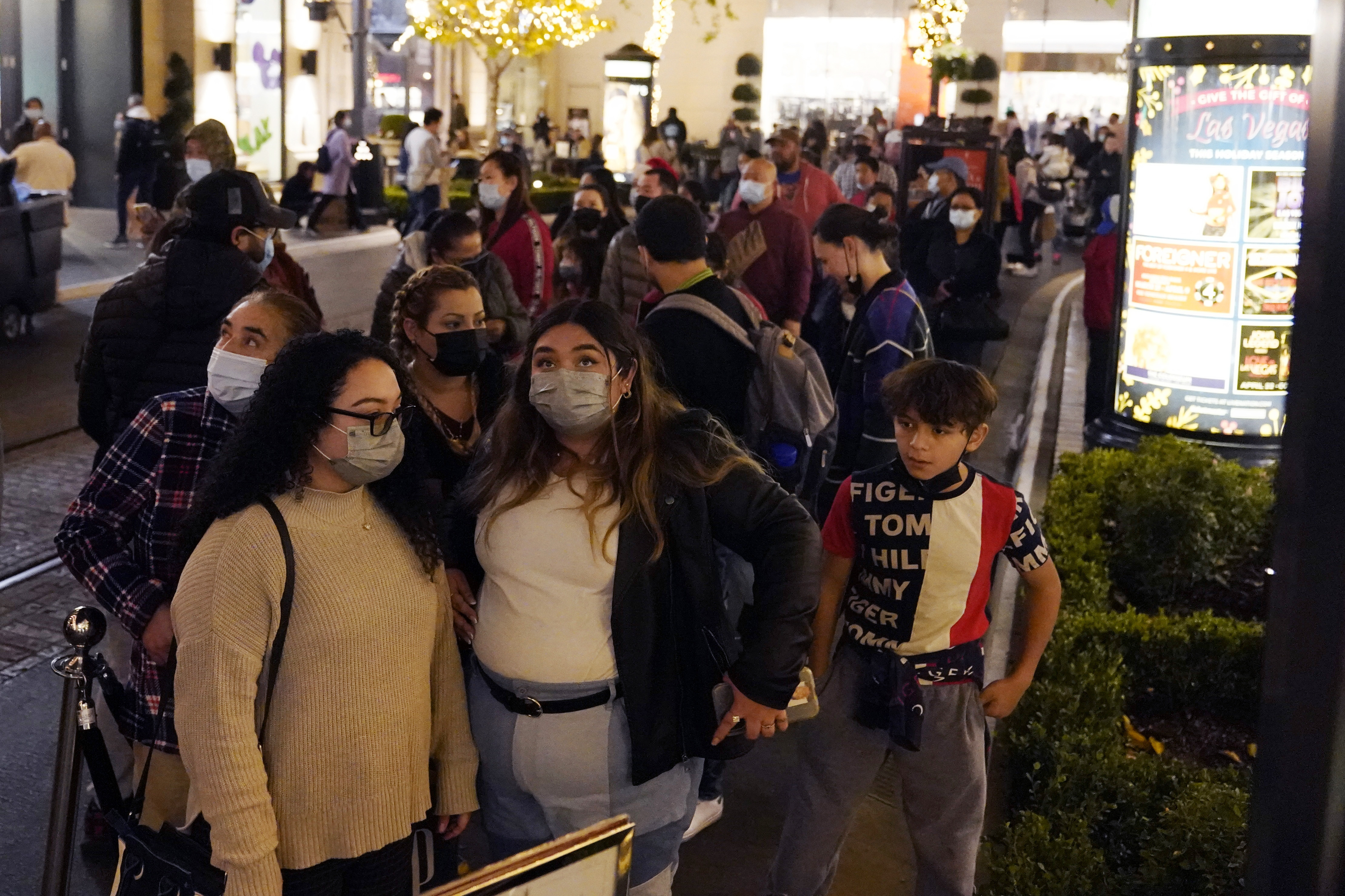 Visitors wear face masks while waiting to board a trolley at a shopping district Wednesday, Dec. 22, 2021, in Los Angeles. (AP Photo/Marcio Jose Sanchez) 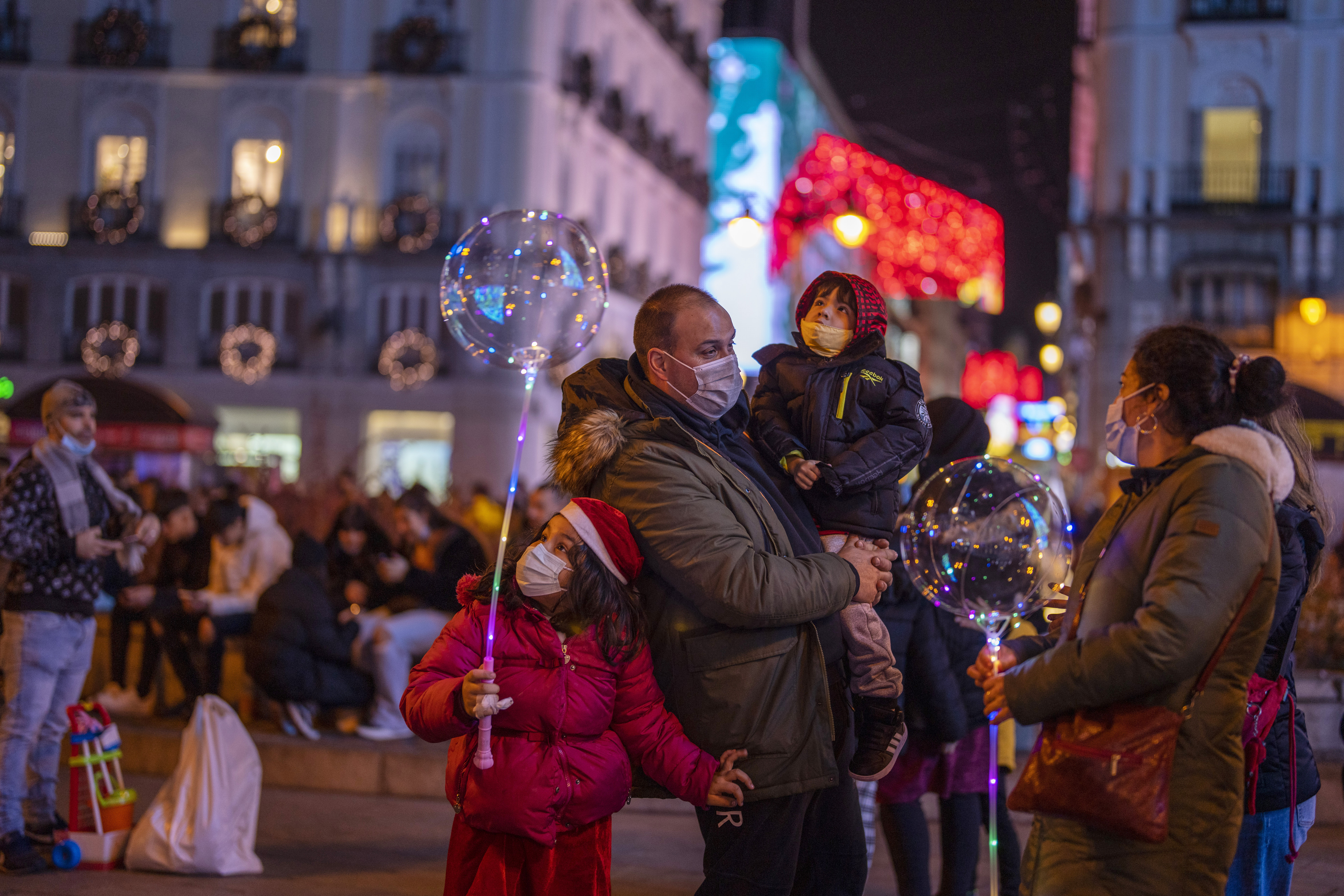 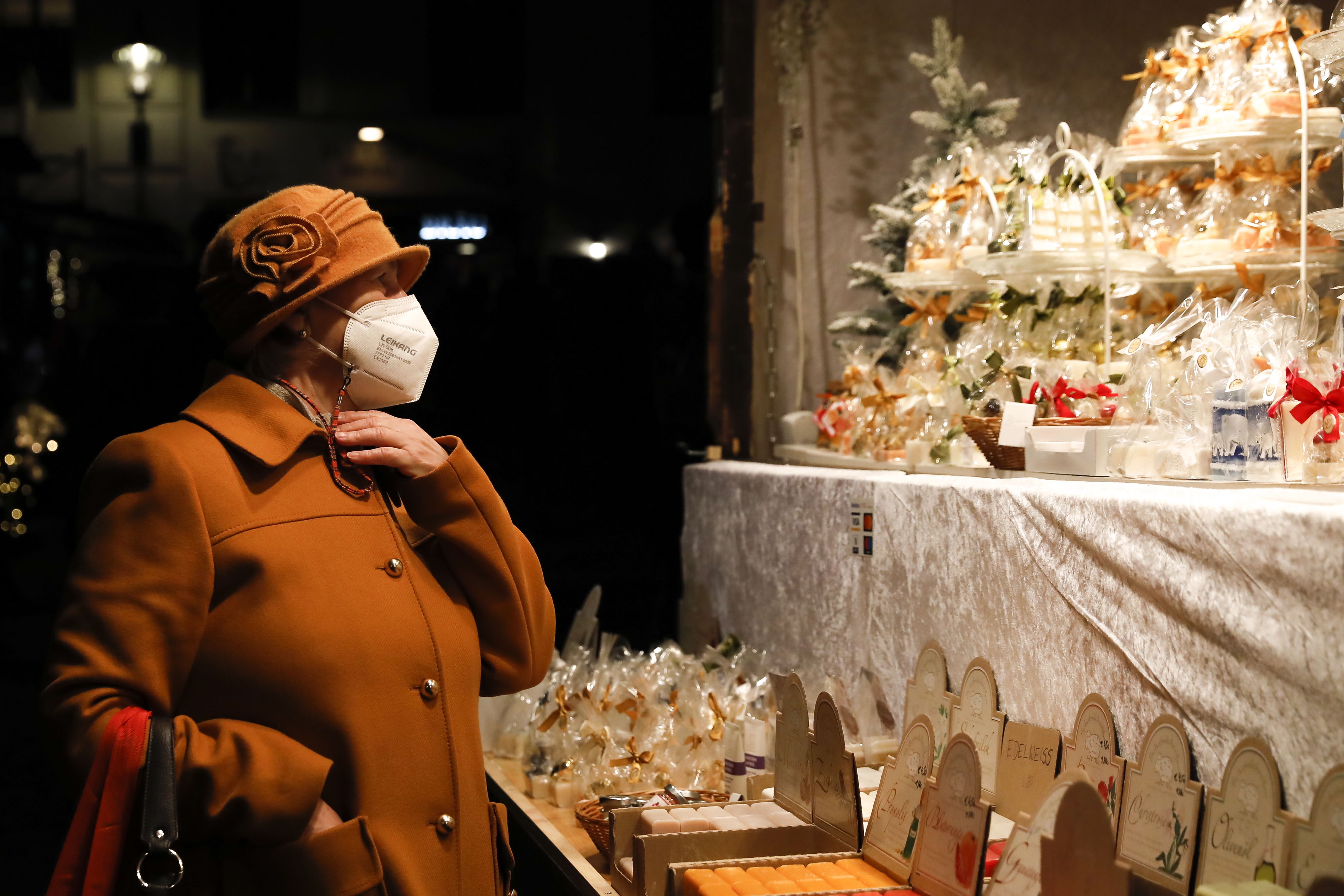