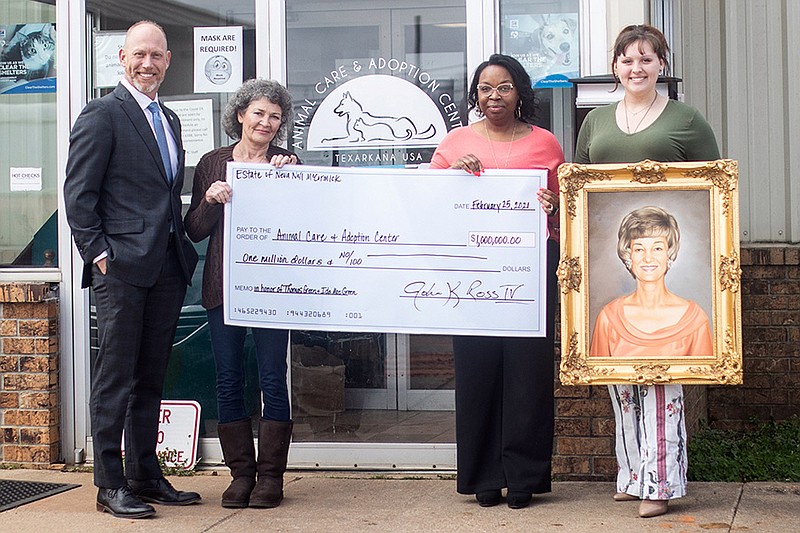 In this Feb. 25, 2021, file photo, representatives of the Neva Nell McCormick Trust present a ceremonial check to Texarkana, Arkansas, city staff and display a portrait of McCormick, who left $1 million to the Animal Care and Adoption Center. (Staff file photo by Kelsi Brinkmeyer)

TEXARKANA, Ark. -- A $1 million gift helped pay for a major upgrade to the city Animal Care and Adoption Center.

In a February ceremony, representatives of a late local widow who cared for dozens of cats at a time made the donation official.

The Neva Nell McCormick Trust's gift helped pay for a new animal shelter building and facilities, including adoption-friendly kennels and renovations of the center's older buildings.

McCormick, the widow of local chiropractor Roy McCormick, died in late 2020 at age 91, trust attorney John Ross IV said. A longtime animal lover, she took care of up to 40 cats at a time during her life, even buying them their own house.

McCormick left her entire estate to various animal care organizations, but the donation to the shelter was the only one made public, Ross said. Because the donation was to a part of city government, subject to financial transparency laws, it could not be kept private. Other donations from the estate will provide continuous funding for years to come, he said.

"There are going to be some happy cats and dogs," he said.

In July, the city Board of Directors approved spending almost $91,000 on kennels for the new building. Funds from McCormick's donation paid for half the cost.

Direct Animal Products of Boyd, Texas, won the contract to build and install the kennels, which have glass fronts and doors to make them "less like a jail or a cage and more homey," shelter Director Brenda Williamson said.

The new 80-foot by 80-foot building houses the kennels, a cat adoption area, and an on-site spay and neuter clinic. The design will allow better ventilation and easier cleaning than the previous facility did.

The new construction initially was financed by low-interest loans secured by federal Community Development Block Grants. McCormick's donation will be used in part to service that debt.

EDITOR'S NOTE: This is the Texarkana Gazette's 3-part countdown of the top local story lines of 2021 as picked by our editors. Choices were based on interest and importance -- not just in the moment, but also as to what the events might mean to the community as it moves forward. We roll out story summaries No. 6 through No. 10 today. Saturday, to greet the new year, stories No. 1 though No. 5 will be revealed. On Sunday, we'll take a look at how our online readers rank our stories. Hint: A lot differently than our editors do. That said, a tradition that spans decades continues ...