Life after getting the COVID-19 vaccine: Relief, but no 'get out of jail free' card 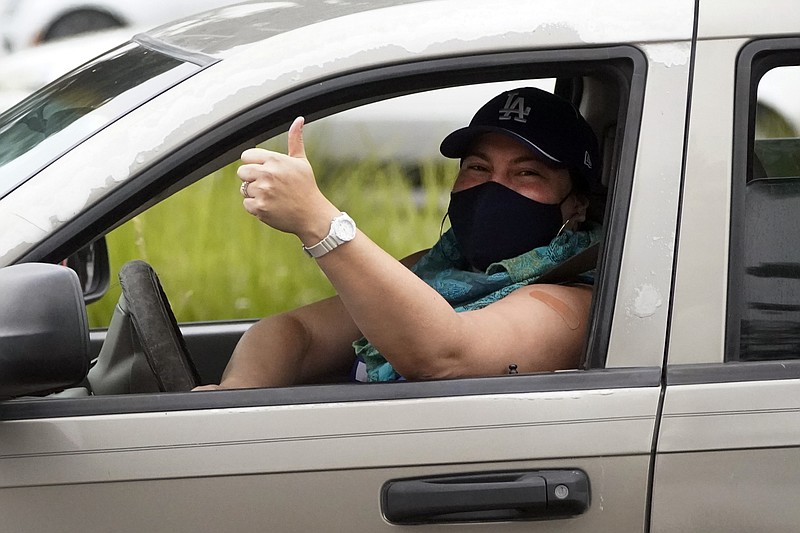 SAN DIEGO Like many other San Diegans, Patricia Horvath has been daydreaming for months about what life will be like once she gets the COVID-19 vaccine.

Hug the grandkids. Take an international cruise with friends.

It'll be a real shot in the arm, the 81-year-old Point Loma resident figured, in more ways than one.

Except now that she's received the vaccine, she's finding out it's not that simple.

"It's a two-sided coin," she said. "Of course I'm happy to get it. I feel more comfortable now. But at the same time, there's still a lot of uncertainty."

So for the time being, she said, she's not changing a lot. Still wearing a mask when she goes out. Still washing her hands regularly. Still keeping her distance around other people " except, maybe, those grandkids.

"I'm not going to let down my defenses much," she said.

Since its arrival here almost a year ago, the novel coronavirus has been all about risk-reward calculations. The vaccines are adding a new layer to that, even as they offer hope that the end is near for a pandemic that has killed more than 2,700 people in the county, 43,000 in California, and 450,000 nationwide.

Now, with the U.S. administering about 1.3 million shots per day, those 65 and over who have been lucky enough to navigate the online vaccine-appointment system suddenly find themselves in an altered reality.

They used to be the ones considered most at risk from the virus, the ones everybody else worried about. Now that they've been vaccinated, they feel the burden of watching out for their loved ones.

Along the way, they've become objects of jealousy, on social media and elsewhere. Does posting a photo of yourself with an orange "I got my COVID-19 vaccine!" sticker make you a goodwill ambassador for widespread inoculation and herd immunity, or does it make you a braggart?

In the eye of the beholder, no doubt. Which is why Dr. Davey Smith, an infectious disease specialist at UC San Diego, thinks the cautious approach Horvath is taking is the right one.

"The vaccine isn't a 'get out of jail free' card," he said. "You should still follow the public-health guidelines on mask-wearing and other things. That's the best way to keep us all safe."

As a health-care worker, Smith received the vaccine, and was "super relieved to get it," he said. "It definitely makes me feel better going out and about," whether it's seeing patients in the hospital or shopping for groceries.

It's still unknown how well vaccines will keep the virus from spreading, and until then, Smith said, those who have had their shots "still need to do what they can to protect the community. That will go a long way toward getting us all to where we want to be."

The U.S. Centers for Disease Control and Prevention offer similar advice on their website. "While experts learn more about the protection that COVID-19 vaccines provide under real-life conditions, it will be important for everyone to continue using all the tools available to help stop this pandemic."

Others say it's important not to dwell too much on what the newly vaccinated shouldn't do, though. That might discourage others from getting inoculated.

"You have to message hope and optimism," Monica Gandi, an infectious disease specialist at UC San Francisco, told the Washington Post.

She said two couples who have been vaccinated should be fine to share a meal together indoors because data so far shows they probably won't transmit much, if any, of the virus. Other scientists, though, say it's too soon to tell about transmission rates.

Maureen Martin, for one, isn't willing to take chances.

She's been "acting as if I don't have the vaccine at all," even as she anticipates being able soon to resume a regular "supper club" she had with friends for 15 years before the coronavirus sidelined it.

A registered nurse in Encinitas, Martin, 69, got inoculated early, as part of a clinical trial for a vaccine. She said she volunteered to contribute to science, but also to protect her 81-year-old husband, who has cancer.

Now he's received his first dose of the vaccine, with the second shot coming up in a few days, and that's made them both feel better about the threats they face from the coronavirus.

Their supper club involves five other couples, and once everybody has been vaccinated, they'll probably get together again, Martin said.

But she envisions the meal will be held outside, with the participants keeping their distance from each other and wearing masks when they aren't eating.

"We'll feel a little more comfortable because we've been vaccinated," she said. "But we'll still need to take precautions."

Martin and her husband have also started talking about renewing another passion: travel. They've been eyeing New Zealand, perhaps some time next year, depending on how things look with the pandemic. Or maybe Canada.

Linda Nehme, a Clairemont resident, is also making overseas plans after getting her first vaccine dose last week. She rebooked a trip to Chile, canceled by the pandemic last April, for the fall.

"For the first time in a long, long time, I really believe I'm going to be able to do this," she said. A trip to India at the end of the year is a possibility, too, she said.

At home, though, in the day-to-day, she remains cautious. Her husband, Gareth, works in an office with other people. She worries about possibly passing along the virus to him. She won't feel fully protected until after she gets her second shot, in a few weeks.

So masks and hand-washing and social-distancing are still part of the game plan. "Nothing's changed," she said. "If anything, I'm even more wary because of the variants that are out there."

She received her vaccine at Petco Park and remembers the mood there as "one of sheer happiness, everybody thinking the same thing, that maybe I'm not going to die from this." Even with people wearing masks, she could tell that most were smiling.

"Who needs Disneyland?" she heard one of the nurses say.

Waiting in the car for her shot, she watched the sky light up with the pinks and purples of a spectacular San Diego sunset. Her overall feeling, she said, was one of joy, tempered by the realization that so many people still haven't had the chance to be vaccinated.

"Can you imagine," she said, "to have hunkered down for all these months, to have done your best to protect yourself and others from COVID, and then to get it just as there's this light at the end of the tunnel? That would be so heartbreaking."