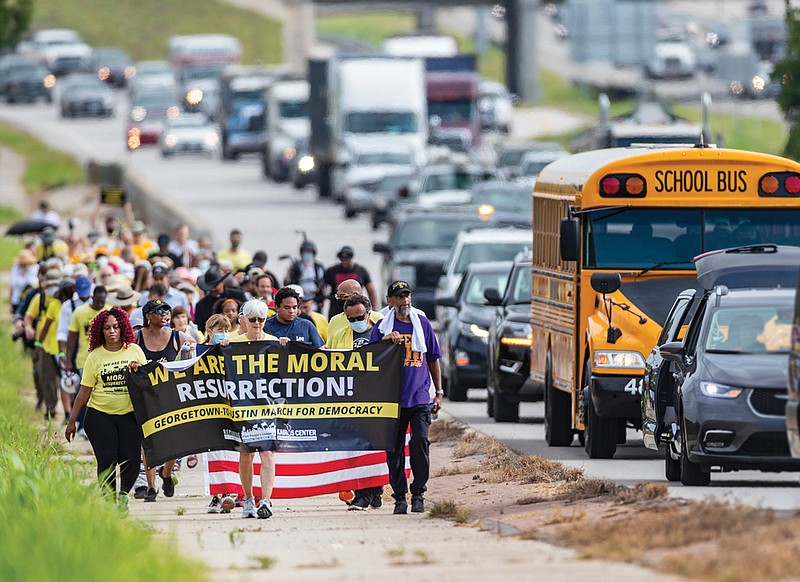 A group of people make a stop at Good Hope Church in Round Rock, Texas, Wednesday, July 28, 2021 during a march from Georgetown, Texas to the Texas State Capitol in downtown Austin. Church leaders and former Democratic congressman Beto O'Rourke are leading the nearly 30-mile voting rights march in Texas. The walk began with nearly 100 participants in suburban Austin and will is scheduled to end this weekend at the state Capitol. The march is the latest effort by Democrats to keep up the pressure over voting rights at a time when the prospects of action from Congress is fading. (Ricardo B. Brazziell/Austin American-Statesman via AP)

GEORGETOWN, Texas - As Rebecca Flores set out on a nearly 30-mile voting rights march to the Texas Capitol on Wednesday, she recalled another long distance: the drive her parents made from the outskirts of town in the 1950s to cast their ballot, after paying a $3 poll tax.

As far as protests go over tighter voting laws, the march in Texas that began with more than 100 people shuffling out of a suburban Austin church parking lot before dawn is not the largest. Organizers said they limited the size over COVID-19 precautions, and asked participants to show proof of vaccination.

But it was laden with symbolism and political purpose amid a GOP push to enact restrictions following former President Donald Trump's false claims that the 2020 election was stolen. Black church leaders and Democrats set off down the road on the three-day demonstration making comparisons to the civil rights era and the landmark Alabama voting rights march from Selma to Montgomery in 1965. The new movement is an extension of that fight, they say.

Republicans have angrily rejected comparisons to the new laws as Jim Crow-style restrictions. The added ID requirements, limits on mail voting and drop boxes and new controls over local elections officials are meant to protect against fraud and restore confidence in the system, they said. There was no evidence of widespread fraud in the 2020 election.

The march was led, in part, by Beto O'Rourke, the former Democratic congressman and presidential candidate who has not ruled out a run for Texas governor in 2022. O'Rourke and marchers shut down the frontage road of Interstate 35 during the morning rush hour, funneled between restaurants and cut a path from red statehouse districts to blue ones.

It was the latest effort by Democrats - and one of their longest - to keep up the pressure over voting rights when it is not just prospects of action from Congress that are fading. So, too, is national attention surrounding Texas Democrats more than two weeks after they bolted to Washington to block new election laws backed by Republican Gov. Greg Abbott. 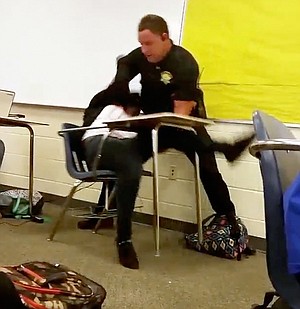 As the walk began Wednesday, the quorum-breaking Texas Democrats continued visiting with members of Congress, but still have no commitment of a meeting with President Joe Biden.

If they stay out of Texas through next week, Democrats will have run out the clock on the current special session and the GOP's latest voting bill - but Abbott has already promised to immediately call another.

"They can only hold out for so long," O'Rourke said. "So it's really no longer up to the Texas Democrats. It's up to President Biden and it's up to the U.S. Senate."

O'Rourke began the march at the back of the line as the Rev. William Barber, the national co-chairman of the Poor People's Campaign, led the group out of Christ Lutheran Church in Georgetown carrying signs that included "Pass All Provisions of the For the People Act" - the stalled federal legislation that would touch on virtually every aspect of how elections are conducted.

Police blocked the interstate frontage road as the slow-moving crowd set off toward Austin. About a mile after starting, Barber held up the crowd to remind them over a bullhorn to stay socially distanced. When a woman in an SUV abruptly stopped in the middle of the road outside a hotel to yell at the group - saying voting was accessible to all - the crowd broke out in a chant to drown her out.

It was kicked into gear by Marcel McClinton, a 20-year-old activist from Houston, who around the 6-mile mark was clutching a half-empty bottle of water under a bright sun with no shade. He ditched $2,000 in summer classes this week to take part in the march, having snuck in a few extra walks back home to work up his stamina.

The temperature had climbed to 90 degrees, but it was Biden who was making him hot for not pushing to get rid of the filibuster in the U.S. Senate.

"President Biden thinks that we can out-organize Jim Crow voter suppression," he said. "This is a historic moment. And if he cannot stand up to the plate today and fight for people like me, then this country will go down."

By late morning, the size of the march was smaller; some of the early-risers were replaced by a new wave of walkers. Eugene Howard, a 37-year-old educator, said he was on less than two hours of sleep after driving with his wife and 5-year-old daughter from suburban Houston, where he says he is running for Congress next year.

He let them sleep in at the hotel for the first stretch, but said they, too, will eventually join.

"This is that significant. I believe this will be remembered," he said. "And hopefully this galvanizes the nation."