HER | Harrisons partner with community to make a lasting path 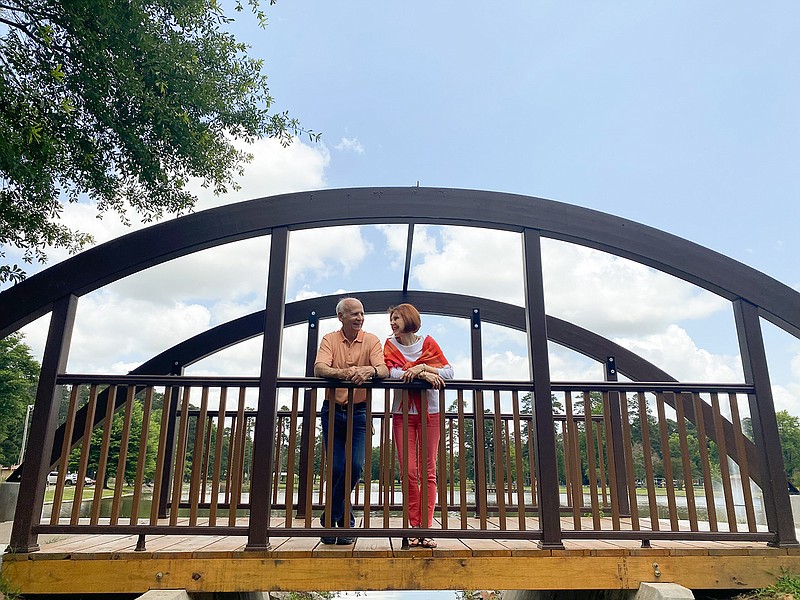 Julie-Ray and John Harrison stand on a bridge along the walking path at Spring Lake Park in Texarkana Texas.

Whether a stroll down their street at sunrise or finding funds for the next popular walking trail in Texarkana, John and Julie-Ray Harrison forge paths in their community. "In your life, you usually either have time or money," John said. "And you don't usually have them at the same time. At our point, we have time."

Through Partnership for the Pathway, a nonprofit organization they founded around 15 years ago, the Harrisons have raised a little more than $250,000 to build recreational paths throughout the area. From being integral pieces in the emergence of walking paths at Bringle Lake Park, Spring Lake Park and others, the Partnership continues to seek ways to get Texarkanians out and moving.

Like many successful organizations, this one had humble beginnings. Julie-Ray said she and a friend just happened to notice one day how many trails there were in Little Rock compared to Texarkana. And it was from that moment that she took off with the idea.

"We literally put a map on the floor and just started drawing where we thought we might want to have trails," Julie-Ray said. "And about two days later, we went to Texarkana Texas Parks and Recreation Department and said, 'let's have some trails.'"

From there, the Partnership had to provide more than $25,000 in matching grant funds for the city to take off.

"We had a big fundraiser, and people were very generous," she said. "We were fortunate that we had the time and enthusiasm to do this for the community. Now, it takes a whole village, and we've had so much help along the way, like a $5,000 contribution from the (Wilbur Smith) Rotary Club. But it also takes a couple who wants to keep pushing."

Partnership for the Pathway's biggest annual event is its Run the Line half-marathon, the first of which was in 2007. From overachieving with nearly 80 participating runners in the very first race to having 10 times that amount in last year's event, it's safe to say that it's widely popular locally.

Last year, they collected approximately $50,000 in funds from the race to dedicate toward trails in Texarkana.

Unfortunately, the Harrison's had to make the tough decision to cancel this year's run because of COVID-19 challenges. They will hold the next race in February 2022, however, and they're expecting quite the turnout.

"We bring a lot of people to Texarkana with it," Julie-Ray said. "They stay in Texarkana hotels, eat at our restaurants and so forth. That is the fundraiser that allows us to provide cash matches for the grants the cities can apply for. That's what lets us do what the Partnership needs to do, and we get great support."

She said that usually about 70% of the runners who participate in the race come from outside of a 30-mile radius of Texarkana, and they've had runners from 33 states.

"Not only does it bring people from out of town, but it also keeps a lot of our runners from going out of town," John said. "So, they're spending their money here instead of Little Rock or Dallas. Not that they never go there, but you've taken care of them for a little while when they want to compete in a race."

Despite the challenges the pandemic presented, PFP has continued to work on various projects, from the Nix Creek trails and bridge to a current project in the New Boston area.

Like many of the projects they work on, John and Julie-Ray sprung into action on the Nix Creek project when they saw a need. 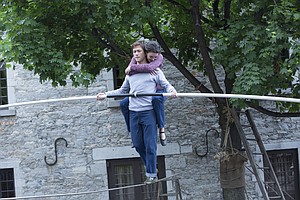 "We were driving on the Arkansas side, and there were four little boys running across the highway," Julie Ray said. "And I told John, 'We have to do something about this.' They were probably 8 to 12 aged kids." They drummed up about $85,000 in matching funds for trails at Nix Creek and a bridge that connects the Boys and Girls Club to the trail.

"Sometimes, it just takes somebody bringing something to somebody's attention for something to happen," she said.

The project that is currently being worked on by the Partnership is the Northeast Texas Trail - which would be from New Boston to Farmersville. Julie Ray said it would be the fifth longest Rails to Trails conversion in the nation.

"It's an interesting project, and it's been in the planning and development stage for a long time," John said. "Many things turn slowly, and a lot of times slower than you'd like them to be, but you've got to be patient."

Through all of the initiatives, grants, paths, races and relationships built over the last 15 years, the Harrison's both have their own way of taking it all in and sitting back at times to appreciate what Partnership for the Pathway has achieved through dedication and community support.

"First off, we've helped to light a fire," Julie Ray said. "We've helped show people what trails we need and what an asset they can be to the community. Number two, when someone tells us how much healthier they are now from walking on the trail, that really hits home. We are clearly aware that Texarkana is composed of two cities in two different states, but we think of it as one community. So, we try to do everything we can on both sides of that community."

John had this to add: "When you're feeling a little bit down and you want to feel better, just ride through Spring Lake Park. See all those people out walking, and see what happened when someone suggested that we need to have trails. They're out there feeling good, breathing fresh air and getting in better shape. I mean, that right there does it for me."