HER | Muralists brighten up cityscapes, residences 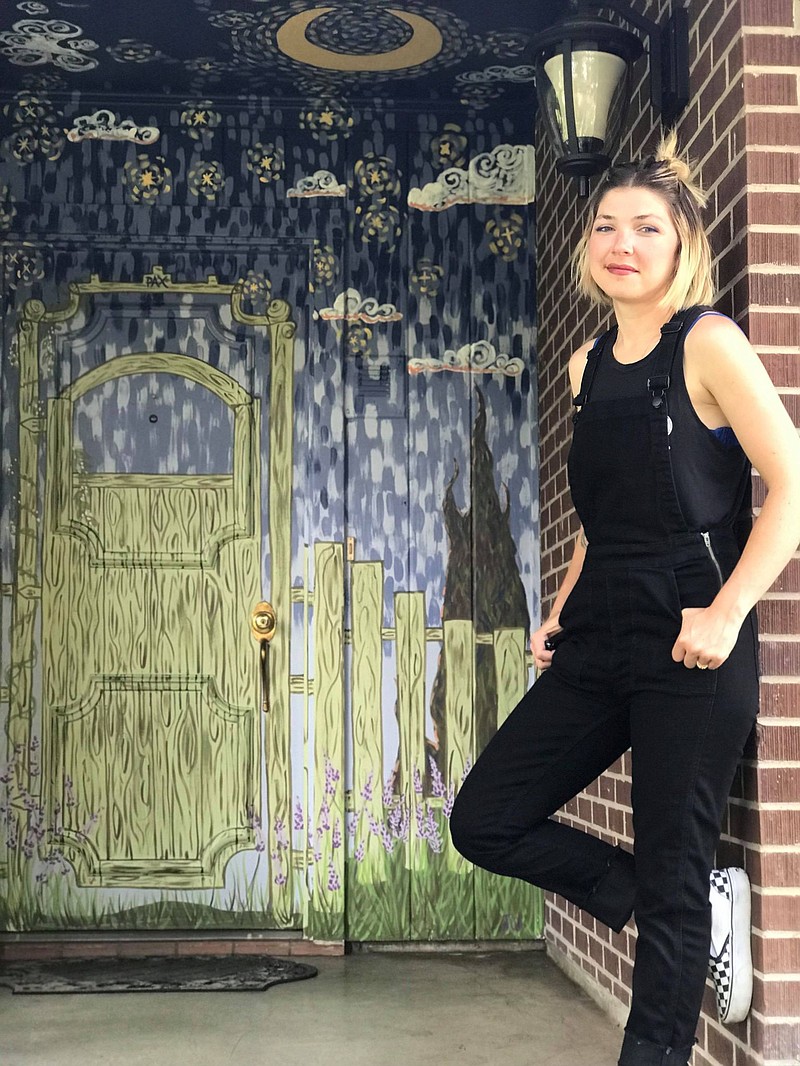 Even though the living is easy and the summertime sizzle is upon us, that doesn't mean local muralists are taking a vacation from their creative work.

Darlene Taylor and Jes Weiner are muralists whose collective artistic touch has been beautifying Texarkana over the past couple of years, and both have projects that keep them busy with the brush, whether it's for public murals or similar colorscapes.

For Darlene, a big chunk of her summer has been devoted to driving up to De Queen, Arkansas, (55 miles north of Texarkana), where she's worked on several mural projects after completing a "Welcome to De Queen" mural this spring.

Darlene's De Queen projects include a strip mall wall near a Chinese buffet, imagery including everything from koi fish to butterflies, umbrellas to hearts, a chair and crown to stylized "DQ" lettering. There's a leopard, too, for a town where that's the high school mascot.

Darlene painted much of an alleyway near De Queen Medical Equipment downtown - "seven murals on that wall," she said.

As is the case with many of Darlene's murals, there's personal significance to the alleyway images, plus a chance to be interactive, such as a girl in the bathtub with bubbles. A big magnolia flower blooms, while next to that is a pin-up girl with an umbrella (styled after a friend).

"Of course in all of my murals there's something hidden," Darlene said. Look inside the pink drain coming out of the wall for an arachnid invader. "It's like 'itsy bitsy spider went up the water spout,'" Taylor said.

A bakery and cafe are painted nearby in the alley, each referring to her friends, such as Cathy Brown Smith (aka the baker Baby Granny) and Darlene's friend Jennifer Tanner, whose daughter wants a cafe when she grows up. Cats and dogs are modeled on friends' pets, such as a puppy named Biscuit.

"If you go up close to these murals, there is so much detail," Darlene said.

Jes Weiner's most recent public mural in downtown Texarkana was the interactive "Texarkana" balloon mural on the side of The Beauty Barr near the Perot Theatre, and also near her other, massive and colorful "TXK" logo lettering mural. But recently she's been painting a couple of residential murals.

"I've been getting into residential murals a little bit more," Jes said. Some have been up in Kansas City, where she divides her time, but also here.

"I did a Van Gogh-inspired mural for a client's front door. It's inspired by 'Starry Night,'" Jes said. His famous "Bedroom in Arles" is another inspiration with its depiction of wood grain.

"I'm trying to emulate that a little bit," she explained. "It's a really neat little entryway. It's kind of whimsical."

Another client also likes Van Gogh, but she wants something like the sunflowers the artist is famous for painting.

"We kind of combined that blue sky and kind of the swirliness that you see in 'Starry Night,' but it's light blue clouds and then big sunflowers. They're fun and they're whimsical," Jes said. Emulating the great Dutch post-impressionist painter is fun.

One client is local potter Chris Thomas and then the other is Kimberly Flint, the muralist's mother. She only has to please one person, the client, with residential murals.

"The thing that's different is I do have a little bit more freedom in residential murals," Jes said.

But she loves working on her public projects. "I ride that high for the rest of the week. I have so much fun with them," Jes said. Downtown visitors can also find two of her murals in the Kress Gap. She has a small one up at Bringle Lake, and she's been pleased to see the murals grow here in Texarkana, bringing value to the city.

"The people who live here are worth seeing beautiful things on the street," she said. "I love murals because there's no admission fee." n