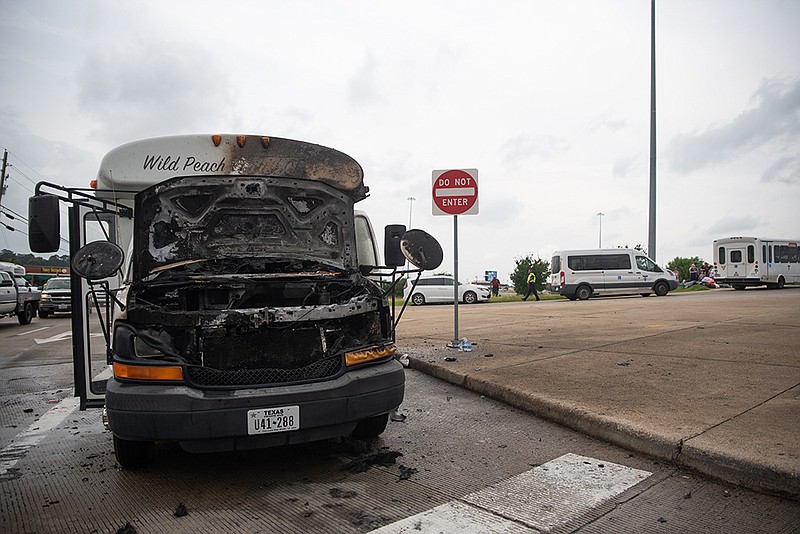 A van from Wild Peach Baptist Church in Brazoria, Texas, caught on fire at the intersection of Richmond Road and Mall Drive on Monday. The van had approximately 25 passengers, including many youth members of the church being transported to Triple S Christian Ranch, a church camp in Rose Bud, Arkansas. The passengers of the bus were transported by T-Line buses to the Southwest Center at about 12:45 p.m.

TEXARKANA, Texas - A church bus on its way to camp caught fire Monday morning at Richmond Road and Interstate 30.

The fire caused traffic to back up at the intersection. No one was injured.

The bus from Wild Peach Baptist Church in Brazoria, Texas, was on its way to a church camp in Rosebud, Arkansas, said Pastor Jake Tucker.

Tucker said he had stopped the bus to help a man who was panhandling at Richmond and I-30. He said the bus caught on fire right after it stopped.

There were about 25 kids on the bus.

"All of us are safe. We are praising the Lord. It went up in seconds," Tucker said.

The fire caused heavy damage to the front end of the bus.

The Texarkana Texas Fire Department responded to the fire.

The cause of the fire has not been determined yet, said TTFD Battalion Chief Alan Sikes.

"Everyone got out and we got them to a safe location and out of the road," Sikes said.

He said a T-Line bus took the kids to the Southwest Center on West Seventh Street.

"We are going to hold them there until we can find transportation to continue them on their journey or take them home. Whatever it is they want to do," Sikes said.