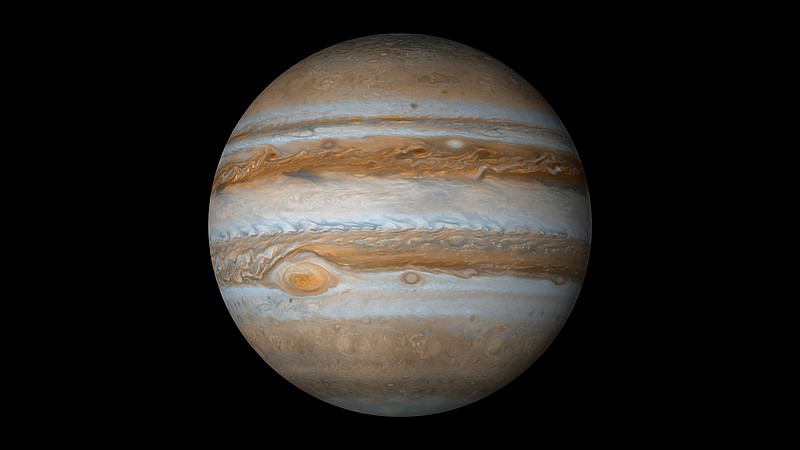 Jupiter is essentially a big ball of mostly hydrogen, but it has turned out to be a pretty complicated ball. Discoveries include lightning higher up than thought possible, rings of stable storms at the north and south poles, and winds extending so deep into the interior that they might push around the planet's magnetic fields. (AdobeStock)

For something that was to have been done and thrown away three years ago, NASA's Juno spacecraft has a busy schedule ahead exploring Jupiter and its big moons. The spacecraft entered orbit around Jupiter on July 4, 2016, and has survived bombardment from intense radiation at the largest of the solar system's planets. It is now finishing its primary mission, but NASA has granted it a four-year extension and 42 more orbits. Last week, it zipped past Ganymede, Jupiter's largest moon.

"Basically, we designed and built an armored tank," said Scott J. Bolton of the Southwest Research Institute in San Antonio, who is the mission's principal investigator. "And it's worked."

Jupiter is essentially a big ball of mostly hydrogen, but it has turned out to be a pretty complicated ball. The mission's discoveries include lightning higher up than thought possible, rings of stable storms at the north and south poles, and winds extending so deep into the interior that they might push around the planet's magnetic fields.

"I think this has been a revelation," said David J. Stevenson, a professor of planetary science at the California Institute of Technology and a co-investigator on the mission.

Juno's highly elliptical path, pitched up at almost a 90-degree angle to the orbits of Jupiter's moons, passes over the planet's north and south poles. On each orbit, Juno swoops in, reaching a top speed of 130,000 mph as it passes within a few thousand miles of Jupiter's clouds.

An early problem with the propulsion system led mission managers to forego an engine firing that would have shortened the orbit to 14 days from 53 days. The mission's scientists had to be more patient but that has become a blessing.

In the original timeline, Juno would have completed its work by early 2018. With the spacecraft's more languid trajectories, researchers will get to watch changes in and around Jupiter that they might have missed had the mission wrapped up sooner.

The additional orbits of the extended mission will also enable further investigations of the mysteries that Juno has revealed, like the rings of storms at the north and south poles - eight storms around the north pole, five around the south pole.

At one point, it looked as if a sixth storm was entering the group at the south pole, but then it was pushed away.

"It's like five bullies on the playground, right?" said Candice J. Hansen-Koharcheck, a scientist at the Planetary Science Institute in Tucson, Arizona, who is responsible for the operation of the spacecraft's primary camera, JunoCam. "Oh, no, you cannot join our game."

Why do the storms, which last for years and are all about 2,500 miles in diameter, appear to remain constant in number?

Two storms would easily fit in a polar region without disrupting each other, said Yohai Kaspi, a professor of earth and planetary sciences at the Weizmann Institute of Science in Israel and a co-investigator on the mission. "But if you had 100, then that would be too close, and they wouldn't be stable," he said. "There is this magic number that can make them fit."

The atmospheric patterns in the top half of Jupiter differ from those of the bottom half. "We tested a little bit with different dynamics of the north and the south," he said, in order to understand why the two poles have different numbers of storms.

Scientists will get a closer look at the eight storms at the top of Jupiter in the coming years. Jupiter's immense gravity is tugging on Juno's orbit so that the spacecraft's closest approaches - what the scientists call perijoves - no longer occur over the equator but are migrating northward. By the end of the extended mission, the perijove of the orbit will occur at a latitude that is the equivalent of where St. Petersburg, Russia, lies on Earth.

Those orbits will also provide closer observations of the perplexing lightning high in the atmosphere.

The colorful, swirling stripes of Jupiter are just the tops of the highest clouds, which are made of frozen ammonia crystals coated with soot. But Jupiter's water clouds - where lightning observed by earlier spacecraft appeared to originate - are 30 to 40 miles deeper than the cloud tops. Within the water clouds, lightning probably occurs much as in thunderstorms on Earth, fueled by the collision of water droplets with ice crystals that build up electrical charge.

But the dim, never-before-detected flashes that Juno spotted were higher up in the atmosphere, where temperatures, about minus-125 degrees Fahrenheit, are far too cold for water to remain a liquid.

When she first saw the flashes, the reaction of Heidi N. Becker, a scientist at NASA's Jet Propulsion Laboratory in California who is the lead for Juno's radiation monitoring research, was "Uh oh, what's wrong?"

The key to unraveling this mystery was ammonia in the atmosphere, which acted as an antifreeze.

"Jupiter has incredibly violent storms that can fling up water ice particles from below at 100, 200 mph and get to these very high altitudes," Becker said.

High up, the water ice crystals mix with the ammonia vapors and melt. The water-ammonia droplets then collide with additional ice crystals flung up from below, building electrical charge to generate lightning.

Seemingly paradoxically, the ammonia is also key to explaining why there is so little ammonia in the same swaths of the atmosphere where the lightning occurs. Scientists had expected that beneath the ammonia ice clouds, the churning winds of Jupiter would mix the ammonia gas evenly throughout the atmosphere.

"But this is not what's happening," said Tristan Guillot, director of research at the Cte d'Azur Observatory in France and a co-investigator on the mission. "We have regions down to 200 kilometers below or perhaps more, that contain much less ammonia than other regions."

That appears to be caused by downpours of mushballs - viscous, sticky conglomerations the size of baseballs.

Scientists realized that the ammonia-water droplets do not remain as small droplets. Instead, they continue to grow until they are too heavy to remain suspended in the air. "Like big hailstones on Earth," Stevenson said.

The raining mushballs, scientists believe, carry much of the ammonia to the deeper reaches of Jupiter's atmosphere.

The mission has furthered understanding of the Great Red Spot, showing that the iconic giant storm, which has persisted for centuries, extends more than 200 miles deep into Jupiter's atmosphere, and it has led to the discovery of a new region scientists call the Great Blue Spot.

It is not actually blue; the name is an artifact of the color scheme used in mapping Jupiter's magnetic field. Indeed, photographs yield no visible hints of the Great Blue Spot. The dark blue region in the magnetic map just indicates a confluence of invisible magnetic field lines entering Jupiter at that point - almost a second south pole sticking out near the equator.

During the extended mission, Juno will also fly by three of Jupiter's large moons.