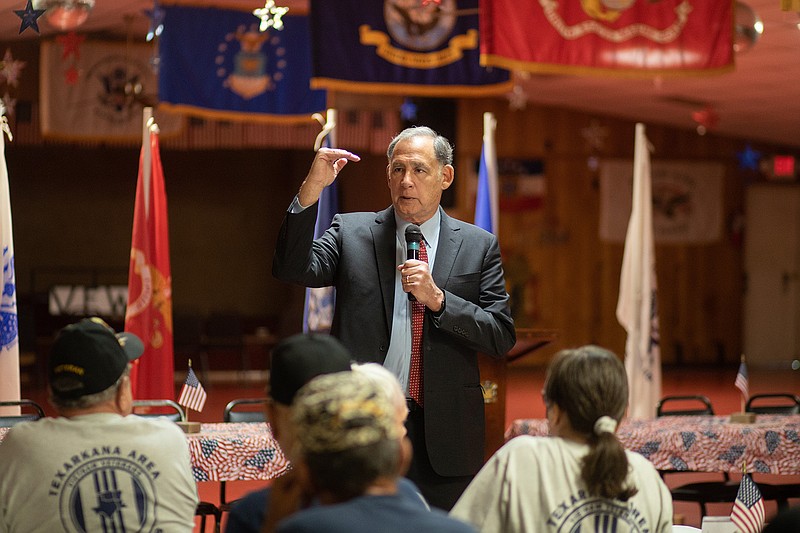 "My dad joined the National Guard when he was just 17 and he eventually wound up in the U.S. Army Air Force, as a waist gunner aboard a B-17," Boozman told about 35 to 40 veterans. "Because if this, I think I understand better then anybody, the great job you all are doing to keep all of our veterans informed about the benefits and aid that belongs to them."

Boozman said the Senate was trying to shorten the waiting time veterans continue to experience (regarding their medical claims), and the distance they have to travel to get medical attention and make appointments.

Boozman said the suicide rate among veterans was in the 20 to 22 per day range.

"Most of these veterans are outside the Veterans Administration's system and we need to get better results in efforts to bring them into our system." he said.

Local VVA Chapter President Greg Beck said it seems more difficult for today's younger veterans to get enrolled with the VA because they may already have good jobs and aren't yet experiencing signs of a health problems.

Texarkana Area Veterans Council Chairman Robert Hernandez said that with Texarkana being in a more rural area, with older adults, it's often difficult to find the transportation that veterans need for getting medical attention - in addition to needing more health care workers in the area itself.

Besides having to contend with the 18-month medical claim backlog, Boozman said the VA also recently found veterans, who served in and around Thailand (during the Vietnam War), have been adversely affected by Agent Orange.

"These veterans apparently haven't received any help and that as to change now," Boozman said. He added that he appreciated all the work that the various veterans organizations, like the ones represented in the room, have put fourth to get information to veterans in need of medical care.

Beck said the biggest goal the different veterans organizations have is to get medical benefit information to veterans needing it.

"Today, one of the things that may be causing suicides among our younger veterans is exposure to burn pits (open-air burial pits where waste products were incinerated, usually in Iraq and Afghanistan), Beck said.

Boozman finished the meeting by paying tribute to the veterans organization in the room, saying "We are the greatest free country the world has ever seen and it's because of all our veterans like you."