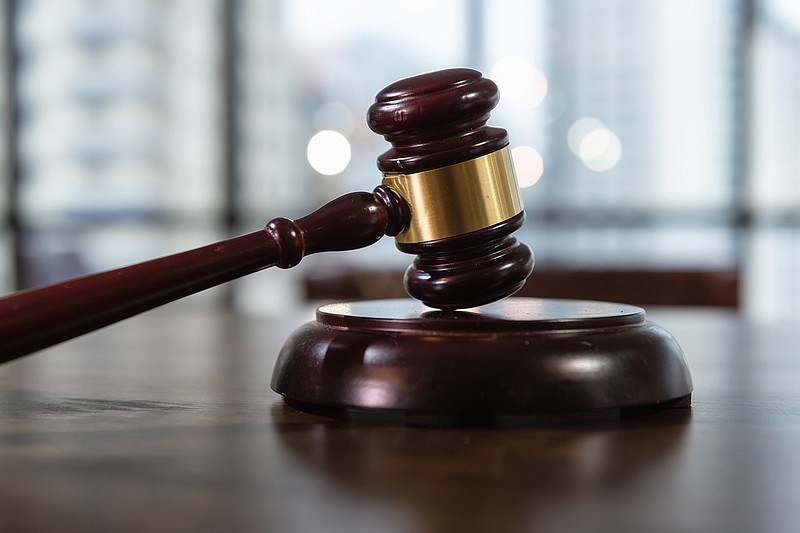 DALLAS - The two Tarrant County, Texas, judges had ruled on a seemingly routine home foreclosure but then suddenly faced a potential $2.9 million judgment against them.

Sybil Joy Ehninger High, a 49-year-old former home renovator, was unhappy that the judges didn't see her side in the foreclosure dispute. So she went to a rural California man with no professional qualifications who handed her the lucrative "arbitration award," court records show.

Losing her home was bad enough, but Ehninger High's problems got a lot worse when she tried to register that award against the judges in a Fort Worth federal court.

The Tarrant County district attorney's office said the "sham" arbitration award was intended to harass the judges and amounted to fraud. U.S. District Judge Reed O'Connor had her hauled into his courtroom to answer questions.

He also ordered the alleged arbiter, Bob Dale Presley Jr., to show up and explain himself. When Presley ignored his order, O'Connor had him arrested and locked up for more than four months for contempt.

Domestic terrorism is a key focus of the Biden administration. But a lesser-known variant is waged not with guns and explosives but with paper - reams and reams of sham documents riddled with pseudo-legal gibberish. This "paper terrorism" from sovereign citizen extremists, experts say, is becoming a serious burden for state and federal courts, clogging dockets with nonsensical filings intended to harass and overburden court officials and other authorities.

The FBI considers sovereign citizens to be anti-government extremists and their prolific and nonsensical court filings a form of domestic terrorism. And experts say the movement, with its false promises of escaping debt, could grow in the coming months by appealing to those struggling financially from an economy crippled by the coronavirus pandemic.

"Historically, the sovereign citizen movement has been able to exploit bad economic times and use the pool of desperate people as a recruiting ground," said Mark Pitcavage, senior research fellow with the Anti-Defamation League's Center on Extremism.

Sovereigns do this, he said, by promising to help people get out of debt and convincing them their problems are not their fault but caused by an illegitimate government and banking system.

"When you're a desperate person, you're going to reach for anything people throw at you," Pitcavage said. "It's the only rope you see."

Lenders have said in recent court filings across the U.S. that similar cases of fraudulent arbitration awards are on the rise and spreading fast, as people use them to try to avoid foreclosure and debt. One mortgage bank is suing Presley in federal court in California for racketeering. The suit, filed last year, says he ran a "fraudulent enterprise that is rapidly evolving."

O'Connor has shown he has little patience for sovereign citizen shenanigans, having previously jailed a man for 16 months for ignoring his order to comply with an IRS summons. The 55-year-old Grand Prairie truck driver was eventually released in late 2018.

Presley finally did answer questions in court during a March 16 hearing, providing a rare look into the thought process of a sovereign citizen. O'Connor released him shortly afterward.

Although O'Connor jailed Presley for several months and tossed out his arbitration award, Presley and Ehninger High have not been charged with a crime. The district attorney's office did not respond to questions about whether it is investigating the matter.

Ehninger High, who worked for Presley's arbitration entity as a notary, declined to comment when reached by email, saying she wants to "put this whole matter to rest."

"I'm sure anything I say will be used against me, and please notice in the records of the case that my testimony was forced under threat of arrest," she said.

Presley has handed out multimillion-dollar arbitration awards to people across the U.S., including one for $55 million to a Pennsylvania man who was fighting a condemnation action by a Texas pipeline company, court records show. At least one other North Texas resident has filed an arbitration award through Presley in a failed attempt to escape debt, according to court records.

Presley operates under an entity in California that he calls the "Healing My People Arbitration Association SSM." To obtain his services, clients pay a $9 monthly fee or $105 for the year, according to an archived version of his now-disabled website.

Presley told O'Connor in court that his organization is a "self-supporting ministry" and that he is an "independent" Baptist minister who pays no federal income tax.

Ehninger High told O'Connor at a February 2020 hearing why she sought the unauthorized arbitration, according to a court transcript.

"I was frustrated with the way things were going in state court," she said. "The judges weren't listening to anything I was filing or saying."

In more serious cases, sovereign citizens have been prosecuted for filing bogus liens against public officials. Such filings can do real damage, leaving those on the receiving end with wrecked credit and expensive legal fees.

A Pennsylvania woman, for example, was sentenced last year to a year in prison for filing $15 million in fraudulent liens against an IRS employee. She had mailed the IRS letters "that espoused sovereign citizen ideology," authorities said.

While the government calls them sovereign citizens, they often refer to themselves as a "natural" or "private" person "living on the land," answerable only to God's laws. Presley in his filings has referred to himself as a "sovereign civilian" and a "private American sovereign" who isn't a U.S. citizen.

There are many variants, but a central tenet of the movement is that the U.S. is secretly a corporation run by elites based on something that happened in the 1700s or 1800s. As a result, Americans are not bound by their nation's laws, such as the requirement to pay federal income tax. One can supposedly opt out merely by filing certain paperwork.

The movement has attracted con artists, Pitcavage said, who view it as a financial opportunity. Adherents become fascinated with governmental and judicial bodies and "often try to create their own fake versions of them," Pitcavage said. When one sovereign "guru" comes up with an innovation - like phony arbitrations - it's often quickly duplicated and "can spread really far really fast," Pitcavage said.

"Almost anything you could think of, they'll create their own versions of and try to exploit in different ways," he said.

Before her financial troubles began, Ehninger High ran a business that bought, fixed and sold distressed real estate properties, or "handyman specials," mostly to investors for cash, according to her website.

Her mortgage lender foreclosed on her Fort Worth home in September 2018, court records show. The new owner tried to evict her, but Ehninger High refused to leave and instead sued both parties - without a lawyer - in Tarrant County courts, records say. She lost both cases and filed for bankruptcy in October 2019, saying she was unemployed and listing about $45,300 in assets and $340,000 in liabilities, according to court records.

About a month before, Ehninger High filed a "foreign judgment via arbitration" in O'Connor's court in an attempt to register her alleged $2.9 million award against Justice of the Peace Ralph Swearingin Jr. and County Court at Law Judge Don Pierson, who had ruled against her.

Ogle, of the DA's office, wrote that Ehninger High was "espousing some variant of a sovereign citizen redemptionist theory" in which the government has power only over a person's fictional "strawman" and not "the live person, who remains free." He said she also sent the judges various "fabricated" documents that amounted to sovereign citizen "gibberish."

Ogle said Ehninger High, unhappy with the judges' rulings, began a campaign of harassment against them. He also said her attempt to register the sham award "appears to be illegal under Texas law," and added that she believes herself to be "above the law in terms of paying debts owed."

O'Connor threw out the arbitration award in December 2019, ruling that it was fraudulent. He said the law requires parties to agree in advance to arbitrate any disputes, which did not happen in her case. O'Connor called her a "disgruntled litigant" who submitted "nonsensical filings," and he prohibited her from making any more.

"Attempting to memorialize a baseless arbitration award against elected officials by using the federal court system is a matter of utmost seriousness," O'Connor wrote in his ruling. "Frivolous filings like that filed here are harassing as neglecting to address them could lead to serious consequences."

During the February 2020 hearing, Ehninger High told O'Connor that Presley had advised her to send the documents to the judges and register his arbitration award in federal court.

"I was never going to collect the money," she said. "To me, it was about getting the questions answered."

But O'Connor told her the bogus award held "potential consequences to the judges personally as far as their credit, their reputations."

Matthew Durham, an attorney for the lender that Ehninger High sued, called her filings "nothing more than a hodgepodge of obscure legal references ranging from mentions of the Federal Reserve to quotes from President Franklin Delano Roosevelt."

She tried to register a $1.4 million arbitration award - also from Presley - against the mortgage company, records show. Durham said in his September 2019 court filing that organizations like Presley's prey on people in financial trouble.

"Many financial institutions have recently been experiencing an influx of fake arbitration hearing notices, awards, and even invoices," he wrote. "Fraudulent arbitration associations are becoming rampant in our society."

Presley was arrested at his home in south-central California in October 2020 by U.S. marshals after ignoring O'Connor's orders to appear before him, court records say.

He refused to answer questions at a December 2020 hearing and went back to jail, records say.

At the March 16 hearing, Presley agreed to answer questions and declined the offer of an attorney. Shackled and wearing an inmate jumpsuit and long shaggy beard, Presley said he gets clients mostly through "word of mouth." He said he's the sole director of his arbitration association, which he called a private business trust.

Presley said the arbitrations are conducted by himself or a two or three-member panel. He said he has no legal education and isn't associated with any arbitration groups. The documents he makes available to paying members on his website, he said, are obtained "off the web."

He said he couldn't recall details of Ehninger High's arbitration that he held in July 2019 in Bakersfield, Calif. Presley said he tells clients to file their awards in federal court to use the power of the court to enforce the judgments.

Where did he come up with the $2.9 million figure against the two judges? By asking Ehninger High what her "losses" were, he said. But Presley said he couldn't recall what those losses were.

Presley became impatient and annoyed at times during the questioning.

"These judges were accused of fraud and you're attacking me as if I'm a criminal," he told the DA's office lawyer.

O'Connor ruled that Presley never asked for any evidence of an agreement to arbitrate. And the California man issued the award to Ehninger High without the judges' participation and without giving them any notice of the arbitration's time and place, O'Connor wrote.

Presley told O'Connor that the judges "defaulted" and therefore didn't have to be present. When told that federal courts have vacated all of his arbitration awards, Presley paused before replying.

"They don't have that power," he said.